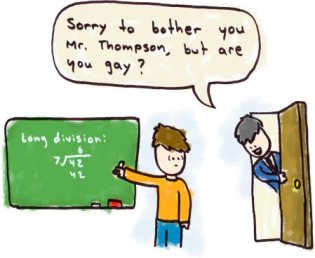 Welcome to Also.Also.Also, where we catch you up on all the stories we didn’t devote entire posts to. There’s a lot of them!

+ The Buffalo News has a great, in-depth piece about what it’s like to be a gay teacher. Many gay and lesbian teachers say that school isn’t just an unpleasant place for gay kids, but also for gay adults. They cite instances of insensitive or discriminatory comments from colleagues, and one Niagra Falls teacher told the paper: “I can’t think of another job where being gay would be so taboo — just because you’re around children, and people think the worst.” They also spoke to teachers who felt it was important to be out at school in order to provide the kids with someone to look up to. You should read it!

+ In New Jersey, a high school teacher named Viki Knox posted some crazy-ass-shit about gay people on her facebook page and is now in trouble. She wrote on her page that “homosexuality is a perverted spirit that has existed from the beginning of creation” and complained about a school display recognizing GLBT History Month. Today, the Human Rights Campaign will present a petition to the school board signed by thousands of its members, calling on them to take action against Knox.

+ A business professor at Indiana University of Pennsylvania is under fire for bullying her students about their sexual orientation. She said being gay is “disgusting, unnatural, and abnormal.”

+ In San Diego, three Marine corporals have been discharged for bad conduct after admitting that they entered into fake marriages in order to obtain housing allowances (we covered this story when it broke, but a conclusion hadn’t been made yet as to the Marines’ fate). Lesbian Cpl. Ashley Vice and her girlfriend, a civilian named Jaime Murphy, pretended to be married to two male marines. They pleaded guilty to stealing from the government through fraud.

+ The University of Iowa may or may not start a gay fraternity.

+ I give you: The Ira Glass sex tape.

+ Most colleges aren’t ready to ask applicants about sexual orientation because it’s controversial.

+ How in the world will they teach children about gay history?!?!

+ In Texas, a student is claiming he was kicked off the cheerleading squad after being caught kissing a boy on school survellience cameras. The school insists his sexuality had nothing to do with it. His parents are really upset. 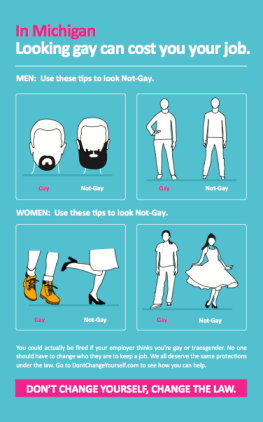 + “We Are Become Pals!” ended! Sadness! It was good. You should read it, if you missed it.

+ A school board rejected a grant of nearly $55,000 from the Boy Scouts of America because because “the organization discriminates against gay youth.” BAM.

+ Julia Nunes sang a song about pizza with which you will probably strongly identify. Also, “Run Around Sue.”

+In North Carolina, a lesbian couple was arrested for refusing to leave the County Register of Deeds office after being denied a marriage license twice. The pair had been together for 30 years and were acting as part of the Coalition for Southern Equality’s “We Do” Campaign.

+ Also in North Carolina, vandals fucked up NCSUS’s Gay Lesbian Bisexual and Transgender Center’s glass-encased billboard. No arrests have been made.

+ Meanwhile in Chicago, some of our very own people decided to be bad gays and vandalize the Arlington Heights Christian School (they threw two blocks of concrete through their windows) in anticipation of an Americans For Truth Against Homosexuality banquet which would feature a speech from anti-gay activist Scott Lively, author of “The Pink Swastika.” AFTAH head Peter LaBarbera is calling the crime “domestic terrorism” and says if it had been against a pro-gay group, it’d be considered a hate crime and therefore he would like it to be considered a hate crime.

+Amy Poehler says that television isn’t a lesser version of film, at least in terms of its portrayal of women. In an interview with the New Yorker, she said, “I think films are kind of catching up in a way to where television has been for a long time. Television is still, in my opinion, the best place for female characters.”

+ Musical theatre gangster rap. That is all.

+ Why do millennials seem to care more about gay rights than reproductive rights?

+ Remember when we talked about Broad!, a literary zine the publishes exclusively female-bodied or female-identified writers and artists? They have a Kickstarter!

+A stellar review of the made-for-girls game, Lady Popular: “While too many games are pretending that ladies enjoy the same things as men, like shooting, building cities or exploring alien worlds, Lady Popular properly recognizes what it is that makes a true, strong, independent lady: shopping, hairstyles, and having a boyfriend.” Also, you can have a boyfriend named “Car Washer.” Mhmm.