This is Part 9 of a 12 column series. If you’re just joining in, start at the beginning!

I’m a queer femme who prefers she/her/hers pronouns and is super excited to be called mama/mommy/mom/ma or whatever variation our little muffin comes up with ANY DAY NOW! Okay, so she’s probably not going to start calling me mom any day now, but she is due to arrive really at any moment from here on out. Which omg holy shit. We are so excited to be parents of an outside-the-uterus baby, and we are checking all those last things off our pre-baby to do list. For those eagerly awaiting, Tiny still has no name, and neither does Simone. 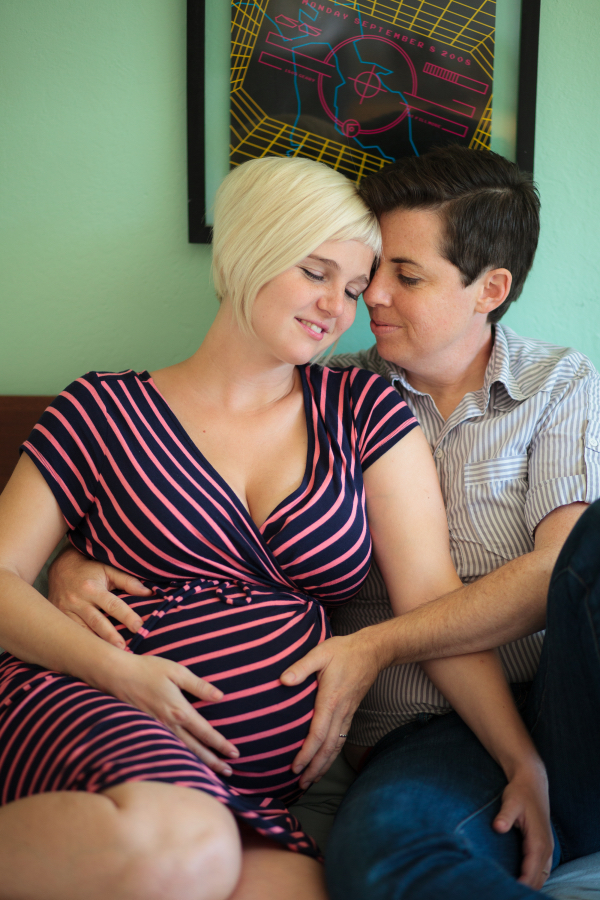 Simone, the love of my life and the co-parent to our future child, is a masculine-identifying woman. She lets me call her butch at times because I think it’s sexy, but it wouldn’t be the first term she’d use to characterize herself. There isn’t a particular gender term that she claims, really, though I could also describe her as a boi, perhaps. Simone’s gender is complicated. She firmly identifies as a woman. Though she tucks them away in sports bras on the daily, she has beautiful boobs that she (and ahem, I) enjoys. She shops exclusively in “men’s” sections of clothing stores. When she puts on a dress, it looks and feels like drag.

When Simone and I got engaged, I couldn’t imagine anyone calling her a bride. Way too weird. Way too feminine. I was happy to be becoming her wife, but in no way did I envision her becoming mine. Calling her my wife felt like I must instead be referring to Cinnabon, Simone’s drag persona alter ego. Simone was not becoming my wife. 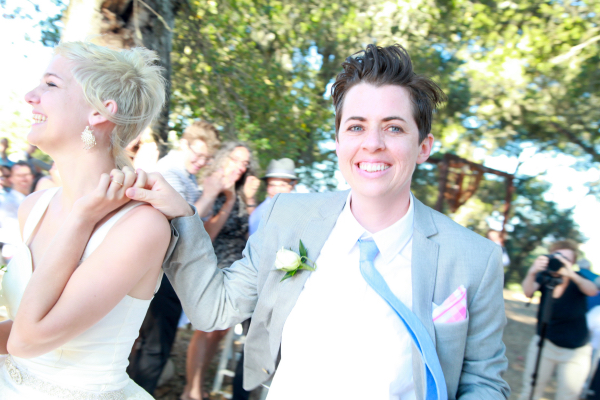 She was and would stay my partner. I realized quickly, though, that people never knew what I meant when I talked about my partner. Simone and I run our video production company together, so in some contexts people thought I was just talking about my business partner. In others, they assumed my partner was a man. They definitely didn’t always know I meant the person I was married to. The woman I was married to.

I started calling her my wife, sometimes, when it felt easier, or when I wanted to be sure someone knew what I meant. Now I use it at least half the time, because I’m glad it means people know right away that I’m a lesbian. Though I’m not a lesbian, and neither is Simone. Is this confusing? We’re both queer, really, but I do also identify as a dyke. I’m in a same sex relationship (now, marriage!) with a woman who doesn’t identify as a lesbian. Also, wife has three less characters than partner, and this is important on Twitter.

Simone and I have a little dog named Noodle. Actually, Simone adopted him a few months before we started dating, which we like to say was her signalling the universe that she was ready for some serious commitment in her life. I’m Noodle’s adopted mama. Simone is Noodle’s daddy. She always has been, it’s what she and I have always called her in reference to our boy.

She’s not, though, the daddy or the father to our child. For a long time I thought she might be. It feels the most natural for me to refer to her that way, after all, since I’ve been doing it about our dog for nearly five years. No reason not be a woman “daddy” to our babe. The main problem I could foresee is how confusing it would be to the world.

Simone gets misgendered all the time. This is mostly fine but can be scary, especially when we pull up to gas stations in towns we don’t know, parking lots filled with groups of macho straight men. Or when she comes out of a stall in a ladies room and a woman freaks out. What would happen when she was taking our child into a woman’s bathroom and that child was calling her daddy? Or when people couldn’t wrap their minds around using she pronouns for a “dad”? Not insurmountable challenges, but something we didn’t want to deal with necessarily all the time. 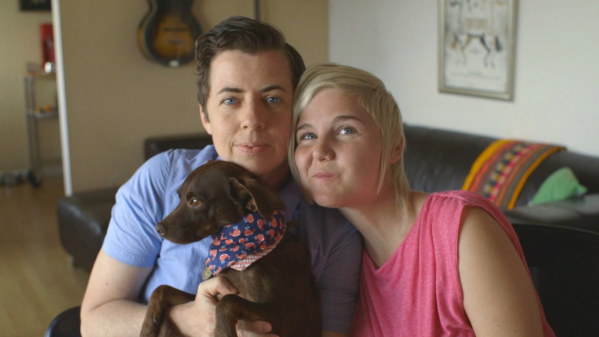 People always assume we are a family of two moms, being that we are two women. We don’t fault them. Simone even hesitated with wanting to write or vlog about this because she was concerned about making all these sweet people who have tried to be inclusive of our “two mom” family feel bad about their mistake. She deserves, though, as we all do, to be identified how she wishes to be. And the people who love us or even just read about us deserve the chance to get it right, too!

The simplest title is that Simone is Tiny’s parent. How fortunate that we have a gender neutral term built right into our language. If you’re writing a letter, “dear parents” is great. Or if you’re introducing her you can say, “this is Simone, Tiny’s parent.” Hopefully schools and communities can without too much trouble fall into this preferred language.

Tiny won’t call Simone her parent, though. I mean we hope she will in some contexts at some point, as a descriptor, but it’s not exactly a pet name. It’s not a name we imagine playing peek-a-boo with. “Where’d parent go? Peek-a-boo!” And it’s not a name I imagine Tiny shouting up across the apartment, “Parent! I can’t sleep!”  While I’m mommy, what will Simone be?

A lot of our masculine female friends and some transmen we know who are parents have chosen to go by “baba.” Some of them like it because it means father in some languages, grandmother in others. Or simply because it’s something that is not mom or dad. Or because it’s becoming a thing, a gender identity to have community around. Simone has never identified with baba herself, though. She doesn’t love the ring of it and it doesn’t jive with her.

We’ve (okay, I’ve) looked at lists upon lists of options. People use all sorts of words of course for themselves as parents. Maddy or zaza. Ima or mima. Duda or madu or duna. Nothing on any of those lists speaks to Simone as her name. Sometimes, I know, the kid just makes something up, so maybe that will happen with us, and it will feel right, and we’ll feel silly for worrying about it at all.

For now we’re going with “Monie” (pronounced MO-knee). It’s short for Simone, and a pet name her friend’s children and other loved ones have called her in the past, so it’s already imbued with sweetness and intimacy. It rings with, but also sounds distinct from, mommy. Most importantly, it’s her own, and it feels right.

We’d love to hear from folks further down their parenting journey (or folks right here with us! or folks still just beginning to think about this stuff!) about what it’s like for you as a gender non-conforming parent. What names did you pick? Did they stick with the kiddos? How has navigating your complicated/simple gender been in the world? Please share your thoughts! And thanks in advance to all who will now refer to Simone as a parent, not a mom.

haley has written 1 article for us.