+ The Republican National Committee’s resolutions committee rejected two different anti-gay resolutions, one of which would have tried to force schools who acknowledge homosexuality in their curriculum to “also include the harmful physical aspects of the lifestyle” and one of which encouraged states to try to make laws nullifying the Supreme Court decision on marriage equality.

+ The first GOP debate of the election season will start tonight at 9 pm eastern time, featuring the top ten candidates out of the 11 thousand people running for the Republican nomination.
Gawker has a rundown of those participating. Rachel Maddow had some thoughts on FOX’s attempt to make it look like the choice of which ten people they gave a platform to was objective. 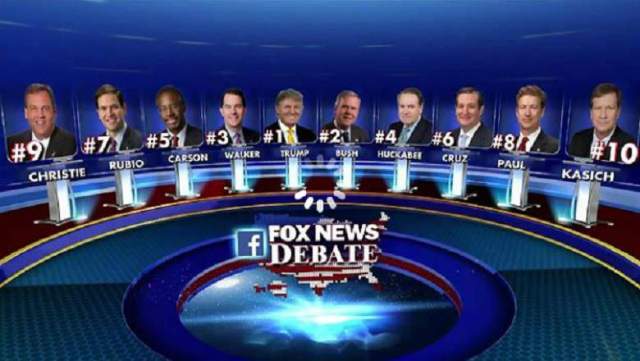 + Jesse Benton, a staunch ally of Rand Paul and head of a super PAC supporting him has been indicted on charges of secret payments to a former Senator. Benton paid senator Kent Sorenson thousands of dollars to switch his official endorsement from Michele Bachmann to Ron Paul. It doesn’t seem like Paul’s camp is going to necessarily distance him from Benton in light of the indictment.

+ You may have read about Charly Keunang and his untimely death at the hands of police in Riese’s Things I Read That I Loved. His family is now filing a lawsuit against the city and the police department.

+ In a really alarming story, there’s recorded audio of a white Alabama police officer, Troy Middlebrooks, who talks about his personal vendetta against a black male resident, how much he wants to kill him, and how he’s thought about how he would cover it up to make it look like the resident had attacked him first. The police chief confronted with the audio reportedly claimed that his officer “…was just talking, he didn’t really mean it.”

+ Piper Kerman of Orange is the New Black testified before Congress about the experiences of incarcerated women, including the sexual abuse to prison pipeline and the challenges faced by women after leaving prison. You can also read her full testimony.

+ A federal appeals panel ruled that Texas’s voter ID law violates the Voting Rights Act of 1965 by discriminating against black and Latino voters. The voting law in Texas isn’t overturned entirely, but voting rights advocates are excited at the legal precedent this creates for the application of the Voting Rights Act, and hope this is a step forward in ensuring greater voting access for all.

+ Former Fox News football analyst Craig James alleges that he was fired for his strident anti-gay beliefs. A quick poll of people who live in my apartment suggests that he was maybe just not a great football analyst or person. He’s now suing for $100,000 in damages because he believes his religious liberties were “trampled upon.” For the record, this is the statement he believes he’s being punished for (in addition to one where he says being gay is a choice):

“I think right now in this country, our moral fiber is sliding down a slope that is going to be hard to stop if we don’t stand up with leaders who don’t go ride in gay parades,” he said during one Republican candidate debate, according to Kera News. “I can assure you I will never ride in a gay parade.”

+ In a story that’s becoming increasingly frustrating and farcical, a district attorney in Texas has committed to investigating Planned Parenthood along with the Texas Rangers and Houston PD, in response to the Center for Medical Progress’s heavily edited videos which depict Planned Parenthood employees engaging in 100% legal activities. The investigation is proceeding despite the fact that Planned Parenthood only operates fetal tissue donation programs in five states, and Texas is not one of them.

+ The drugs that can be used to prevent HIV infection, PrEP, aren’t finding a foothold with gay and bisexual Latino men as much as they are with other groups. Only 52% of GB Latino men said they saw themselves as being good candidates for the medication, compared with 82% of non-Hispanic whites. This is alarming especially because Latino men are at disproportionate risk for HIV, making up 21% of new infections despite making up only 17% of the population.

+ Two West Point graduates who were married to each other in 2013, making them the first same-sex marriage at West Point, were the targets of an anti-gay attack in a Manhattan store. The assailant hit one of the men in the face, although they were able to defend themselves. The suspect has not been caught and the NYPD is investigating the attack as a “bias assault.”

+ A couple in Missouri was excited to have their wedding ceremony at the Ridge Haven Chalet, only to find that the owner won’t let a same-sex ceremony be performed there. Unfortunately, because Missouri lacks anti-discrimination laws dealing with sexual orientation, this is completely legal.

+ The Equal Employment Opportunity Commission has released a new report, “American Experiences vs. American Expectations,” which discusses the experiences of marginalized groups in the workplaces. The findings include the fact that black, Latino and Asian-American workers are more likely to be in management or supervisory positions than they were 50 years ago, but are still disproportionately likely to hold service positions and low-paying “labor” positions. Women as a group are statistically much more likely to hold managerial positions than people of color as a group (although of course those groups aren’t mutually exclusive), with women representing 38.57% of managers; women also now make up more than half of professional jobs that require degrees or certifications.