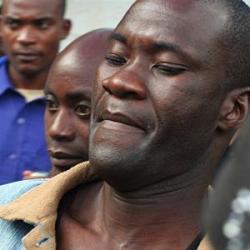 We were afraid something like this was going to happen. It looks like Tiwonge Chimbalanga has gone missing after she and Steven Monjeza were released from prison.

Tiwonge Chimbalanga, known affectionately by his friends and family as “Aunt Tiwo,” went missing shortly after being released from prison Saturday night and has not been seen since, according to sources.  One can only hope that Tiwonge is being hidden and protected by his family, has found a safe house, or has fled the country and is working on securing asylum in a place where he and Steven Monjeza can soon be reunited.

Chimbalanga is actually a trans woman, not a gay man as this article says. We know that because we made the same mistake ourselves recently. Anyway, yes hopefully her disappearance is a sign that she has fled the country or is being protected by a Human Rights Group. But there is absolutely no way to know if it’s that or if she has been kidnapped/injured/killed. We’re hoping for the best, obvs.

Also, in a weird twist, the exact same situation is happening in Pakistan right now. A man and a trans woman were arrested for getting married, though the two maintain the celebration broken up buy police was just a birthday party. They’ll be charged with sodomy, police say; homosexuality is a crime in Pakistan, punishable with up to 10 years in prison. I’m not going to share the quotes from the police because they are too awful.

And to make matters even worse, the media is repeating the same mistakes it made in reporting the Malawi story. Here’s CNN’s lede: “Malik Muhammad Iqbal is a man. Rani was born a man but lives as a woman.” Because obviously her gender identity is more important than the fact that Pakistan has arrested two people for getting married. Oh and they call her a transvestite in the video component of the story. AWESOME! Also that’s against AP Style, just sayin’. (@cnn)

Also this all made Riese think of this documentary Be Like Others, about men undergoing gender reassignment surgery in Iran. You should see it.

CNN is not completely worthless, I guess. They published this editorial about how gay protesters use the Bible as an excuse.

Funny, a week of walking up and down the main artery of the self-proclaimed heart of moral debauchery, and nary a Bible verse could be heard. In the many times I’ve been to Las Vegas over the years, I’ve never seen a religious protest. And yet let a midsize city try to add sexual orientation to its municipal nondiscrimination policy or a high school senior bring a same-gender date to prom, and you would think it was the apocalypse. …

The answer is simple: Those who are uncomfortable or fearful of someone who is different from them sometimes hide behind religion to gain power, nurture their ignorance and justify their prejudices.

He also calls out King James — yes that one, in charge of that popular Bible translation — as a closeted gay man with some anti-gay policies. Interesting. Some things never change. (@cnn)

Also someone sent me an email with a link to the Top 10 Cutest Animals Threatened by the BP Oil Spill. Like an idiot, I saw the word cute and got excited, not realizing this might be one of the most depressing articles ever. But I figure it’s probably important for you guys to know these things. Maybe you want to donate to relief efforts?

Hey on the upside, look what Obama said about us today! Or Obama Twitter, which is basically Obama. If Lohan can find the time, Obama certainly can. 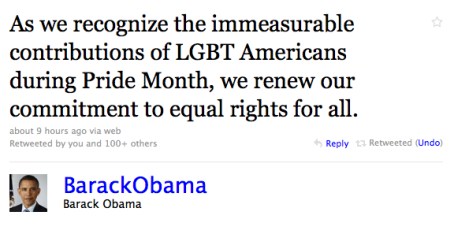 Al Gore and Tipper Gore Broke Up and it makes us feel weird and sad and worried about global warming. (@salon)

Arizona Law is an Attack on All Women: “In addition to the obvious racist and xenophobic implications of the new Arizona immigration law, in addition to the obvious concerns that this unlawful law targets residents based on the hue of their skin and the language on their lips, there is something else that troubles us. SB 1070 is an attack on women – especially mothers, and those who find themselves in situations of domestic violence, sexual assault or workplace discrimination.” (@moms rising)