The shitshow that is Canadian politics is stepping up its game. Every American election season we slide under the radar as we don’t have flashy conventions with octogenarians speaking to chairs or right-wing nut jobs telling us that our rights as women or gays or immigrants are going to be called into question. But sorry America, 2012 is the year that Canadians remind you we can have a political circus as rowdy as yours. Never in my life did I imagine that I’d be in the midst of a political battleground, but here I am. You can dominate the rest of 2012 while you figure out your leader, but this week is going to go down in history for us. 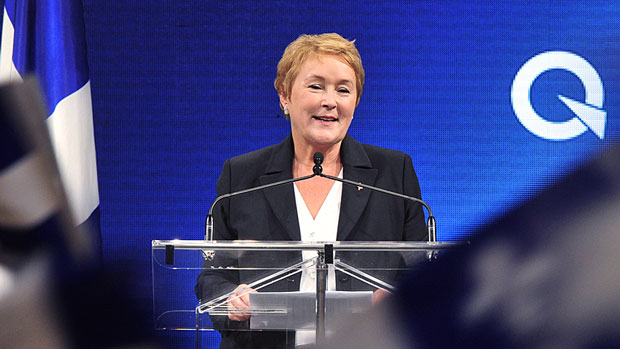 Yesterday was Quebec’s election, an event had been brewing since Premier Jean Charest asked Quebec’s lieutenant-governor to dissolve the national assembly. Although he believed that the silent majority would re-elect him, turns out he was wrong. The Parti Quebecois (PQ) came into power as a minority government, marking the end to a decade of Liberal leadership. Pauline Marois will take a place in history as the province’s first female premier. Her election was an amazing step for women in power, but the mood surrounding her victory turned from elation to fear when a man fired shots and started a fire outside the rear entrance to the victory party venue, killing one and wounding another in the process.

Beyond the obvious shock of someone being slain, the assassination attempt shows how polarizing the political climate is in Quebec right now. While the shooter was clearly a single, deranged individual, there are a lot of feelings going around right now.

Marois has promised that her first hundred days in power will be busy. As you might recall, Quebec, Charest and the Liberals became internationally infamous last spring as thousands of students took to the streets in protest of the Charest government’s proposed tuition hikes; later, after the passing of Bill-78 (a dissent-squashing measure requiring any protest of more than 50 people to be pre-approved by police, among other things), their fight turned into one for free speech and the right to peaceful assembly. Marois has promised to reverse Bill-78, abolish the tuition increase and review post-secondary education funding.

The PQ’s election isn’t being welcomed by everyone, though. It has reignited the separatist movement and brought the possibility of Quebec sovereignty back to the forefront of the political conversation. The PQ had a referendum for sovereignty back in 1995 and it looks like their dream of the 90s may be back again. As an eight year-old, I remember how confusing it was to imagine a giant piece missing from my map of Canada. Now, as a 25-year-old living in said piece, I am equally perplexed. Marois has promised to show Anglo residents her respect and invited them to “shape together our common future,” but she’s also pushing for stricter language laws and for Quebec to have its own laws when it comes to employment and immigration. Although the party’s minority position will hinder plans for Quebec’s separation, we’ll have to wait and see if America eventually gets a second northern neighbour.

Of course, no update on Canadian political shitshows would be complete without mentioning yet another gaffe by our “dear” PM. On Saturday, the RCMP grounded a plane advertising a website critical of the prime minister. The Public Service Alliance of Canada (PSAC) had the plane tow a banner for StephenHarperNousDéteste.ca (Steven Harper Hates Us) near Gatineau, a town bordering the country’s capital city of Ottawa, Ontario.

PSAC’s banner had been met with cheers over the past few weeks when it was flown over Quebec towns, including at Montreal’s recent pride parade. The flights are part of the union’s We Are All Affected campaign, showing Canadians that the cuts in government jobs extend far beyond the union. As workers and funding dry up in food security, scientific research, search and rescue operations, transportation, and the arts, Canadians should know who’s responsible. When controversial bills are omnibussed or agreements are made with corporations that lied to the public, we have a right to know that too.

It seems that the RCMP don’t agree with my sentiments: although the plane was following a flight path outside Parliament Hill’s restricted airspace, the aircraft was ordered to the ground an hour and a half into its scheduled three hour flight. The RCMP say that the plane was grounded because it could have “posed a security risk to the prime minister,” but Larry Rousseau, vice president of PSAC, noted that the flight path had already been approved and that its position could have been verified by air traffic controllers.

Rousseau suspects something else is afoot as the RCMP officers who spoke to the pilot said the banner’s words may constitute hate speech. The PSAC leader says they will continue inquiring as to why the plane was called down, but in the meantime they will try to repeat its unfinished flight.