It happened five years ago. She was my first girlfriend. I had never had sex before; I had been out since I was in my late teens. I thought it couldn’t happen to me, because I thought it wouldn’t. How could a woman, let alone a queer woman, sexually assault another woman?

That question was the first of many I’ve encountered in a five-year process of healing, rage, and research. But the question I most often get—and still receive, to this day—is one of confusion. When I tell people I was raped by a girl, they ask me: What does that mean?

When I finally went to the local sexual assault crisis centre, I was lucky enough to find a counselor who got it. “You sound exactly like a woman who was raped by a man,” she told me. I was destroyed. I wanted it to be different. Wasn’t it different, when it was a woman? It wasn’t, and it isn’t. But there are definite factors that make sexual violence and survival different between lesbians. Access to sexual health education, crisis support services, and health care, and the ways that heteronormativity, substance abuse, internalized homophobia, rape culture, and misogyny affect our communities, are just a few of those factors. 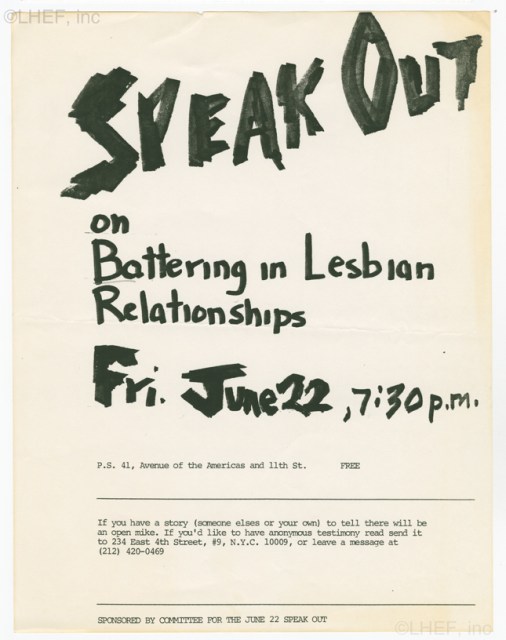 Sexual assault by a woman affected my mental health, my sex life, my friendships, and my activism. It affected my writing and my performances as a poet. I stopped going to the gay bars and the Pride parade in my hometown to avoid my abuser—I thought if I avoided her, it would just go away. But she came into my workplace. She came to my readings. I couldn’t avoid it anymore—I had to tell my friends and coworkers why I was suddenly in a cold sweat and hiding out in the bathroom. Sometimes, I still have to tell people.

Like many survivors, I’ve since learned that most of my friends and coworkers had long suspected there was something going on in my relationship that was harmful. But the warning signs and red flags for abuse in queer relationships manifest in ways that can be subtle or different from what we expect in heterosexual relationships, and what we see in the media. I know my reaction to some classic red flags, as a lesbian, was one of denial or misrecognition. I even interpreted the concern of my allied and loving parents as bouts of latent homophobia. They didn’t think my relationship was wrong because it was between two women — it was wrong because it was abusive.

As for my next few dates and sexual partners, their reactions were nearly as bad as the initial assault: How could you let this happen? It’s not like she hit you. I heard victim blaming and disbelief, even from women and queers who had supported partners and friends through man-to-woman sexual violence, or who were survivors themselves. It didn’t seem to matter — something about me, about this, was different.

Coming out as a survivor of queer sexual violence was, and is, more difficult than I ever thought coming out as a lesbian would be. I couldn’t find anyone else telling their story. Where were our lesbian feminist foremothers? Where were Audre Lorde or Adrienne Rich when I needed them? I turned to zines— Support, by Cindy Crabb, and The Revolution Starts At Home, which is now an incredible anthology in book form. My counselor found me a resource guide developed not for survivors, but for local crisis support providers, about lesbian domestic violence. And then I started writing. I couldn’t write a manual, but I could write the poems I needed to read.

When I was accepted into the 2012 Lambda Literary Retreat on the basis of this manuscript, I didn’t know what to expect. I went to L.A. for eight days, where I met Dorothy Allison, who writes in her book Two Or Three Things I Know For Sure: “I am a woman who must speak plainly about rape . . .I am the woman who must love herself or die.” Jewelle Gomez, the revolutionary Black Indigenous lesbian feminist poet, read excerpts from my project, and understood exactly why it mattered. We talked about why second-wave lesbian feminists, and especially women of colour, might have had their stories of in-community violence met with stigma or silenced. After I met with Gomez, I went and sat in the canyon by myself, in shock. Someone got it. Finally. 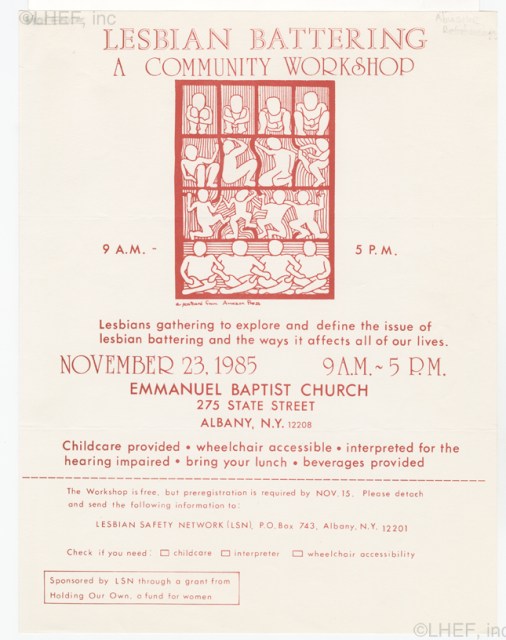 A year later, I secured travel funding to go to the Lesbian Herstory Archives in Brooklyn to back up my project with some original sources. I was terrified, thinking that the archives would reject my project with the same sort of “That doesn’t happen in this community!” mentality that I so feared at home. The response couldn’t have been more the opposite — and this time, I was going with the support and company of two of my dearest friends, poets I had met at the Lambda Retreat. I spent a whole day at the archives, and I was astonished by what I found, and what I didn’t find. There were entire subject folders labeled “abuse,” “abusive relationships,” and “domestic violence” — all about violence between queer women. Posters for support groups from the early eighties and nineties, news articles, and leaflets all talked about lesbian battering as a feminist issue. I found early documents from the former Network for Battered Lesbians, founded in Boston in 1989, which is now The Network/La Red, an American resource and model for LGBTQ organizations beginning to address partner abuse. But when I went through all eight folders entitled “rape,” I couldn’t find anything about lesbian women experiencing sexual violence perpetrated by other lesbians.

In the absence of those materials, I found what I was looking for—confirmation that lesbian-to-lesbian sexual assault is a story that needs to be told, and an issue for which we have to create our own archives and resources. But first, we need to acknowledge that it happens. In-community sexual assault is a reality in our lives as queers. Silencing, shaming, and avoidance won’t help anyone. At least, it didn’t help me, and it certainly didn’t make it go away. I hope the more we talk about sexual violence between queer women, there will be less confusion and stigma, and more awareness about the factors that make this a distinctly queer and feminist issue. With that awareness, and acknowledging that we as lesbians are not immune to the perpetration, survival, and witness of sexual violence in our communities, we can work together to develop support and education around consent for queer women, and leave a legacy for younger lesbians to rely on. I think this can happen, too.

Leah Horlick is a poet and writer living on Unceded Coast Salish Territories in Vancouver, BC. A 2012 Lambda Literary Fellow in Poetry, her writing has appeared in So To Speak, Poetry Is Dead, Grain, Canadian Dimension, and The Bakery. Her first book, Riot Lung (Thistledown Press, 2012), was shortlisted for a Saskatchewan Book Award.

Leah has written 1 article for us.