Five hundred twenty five thousand six hundred minutes is how we measure a year in the life of Celesbian Love! Throughout 2021, many lesbian, bisexual and queer celebrities engaged in activities suggesting love, affection and desire for one another. Furthermore, it was not just an alarming number of my exes who had babies recently, there were many queer celebrities who also participated in the ancient practice of procuring offspring, and boy are those babies CUTE!!!

The year’s biggest heartbreaks were that so many of the questions we asked ourselves in 2021 have yet to be answered — are Kehlani and Sza a thing? Are Zoe Kravitz and Taylour Paige a thing? Are Demi Moore and Masha Mandzuka a thing? Are Lili Reinhart and Wallis Day a thing?  Maybe 2022 will hold the key!

In any event, here are some of the best stories coming from couples that we know are for sure for real a thing!

After a wedding that did wonders for our website traffic, soccer players Ashlyn Harris and Ali Krieger went ahead and adopted baby Sloane on February 12. “We did it, baby!,” Harris wrote on her instagram. “All of the ups and downs, tears, stress and anxiety was worth it to have this beautiful blessing in our arms.”

I think this speaks for itself.

In April, Hannah introduced her followers to “producer extraordinaire” Jenney, who she attested was “funny and very talented at reciting facts,” like this fact: THEY GOT HITCHED.

It was a big year for small private backyard ceremonies and Top Chef winner Kristen Kish and her betrothed, Standard Hotels executive Bianca Dusic, got in on the action in May, exchanging vows for a Justice of the Peace. “Threw on some nice clothes (my favorite blazer), headed to our backyard with our own written vows in hand, had our family with us (virtually), got all sappy, and WE DID THE DAMN THING,” wrote Kish.

Samira Wiley and Lauren Morelli Have a Baby!

For eons, many humans wandered the earth wondering “is there anything cuter than Samira Wiley?” and this year, they got their answer: “Samira Wiley and Lauren Morelli with their baby.” Most impressive was that Lauren Morelli managed to be pregnant for nine entire months and the internet did not know until Samira posted about the baby on Mother’s Day, introducing George to the world and declaring her the result of a three-day labor experience concluding on April 11th.

Queen Latifah has been in a relationship with Eboni Nichols for a significant period of time but she’s always been tight lipped about her personal life, so it was a pretty big deal when, accepting a Lifetime Achievement Award at the BET on the same stage where Lil Nas X had, 40 minutes earlier, performed “Montero (Call be By Your Name)” as “his fully gay ass Black ass self,” Queen Latifah ended her speech with “Eboni, my love. Rebel, my love. Peace! Happy Pride!” “Sunday’s BET Awards was the closest the network has ever come to finally embracing queer identities on its largest stage,” wrote Carmen Phillips of the event, “which is simultaneously saying very little and saying absolutely everything with your whole chest. It was the closest Queen Latifah has come to coming out, if that matters to you, which is certainly something.

YouTubers Rose & Rosie added a tiny human baby to their family in July when Rosie Spaughton, 31, gave birth to a tiny human. This was especially joyous for the couple who experienced hospitalization following a miscarriage in April 2020 and Rose was unable to join Rosie in the hospital because of pandemic restrictions. But then! In December 2020, they were happy to announce on social media that Rosie was 12 weeks pregnant! Their son was born on July 1, 2021.

L Word star Jacqueline Toboni proposed to her girlfriend Kassandra and then promptly broke out in hives, which is gay and beautiful. “Thank you for making me laugh every day,” Toboni wrote on instagram. “I can’t wait to do this forever.”

Breanna Stewart and Marta Xargay Welcome Their Baby Into The World

After announcing their engagement in May, on August 9th, basketball stars Breanna Stewart and Marta Xargay welcomed baby Ruby Mae Stewart Xargay into the world via surrogate. “Becoming a mom is bigger than anything else that I’ve done and I look forward to every beautiful and challenging moment as a family of three,” Breanna told People Magazine.

Sue Bird and Mega Rapinoe Kiss at the Olympics, Making Our Website Explode 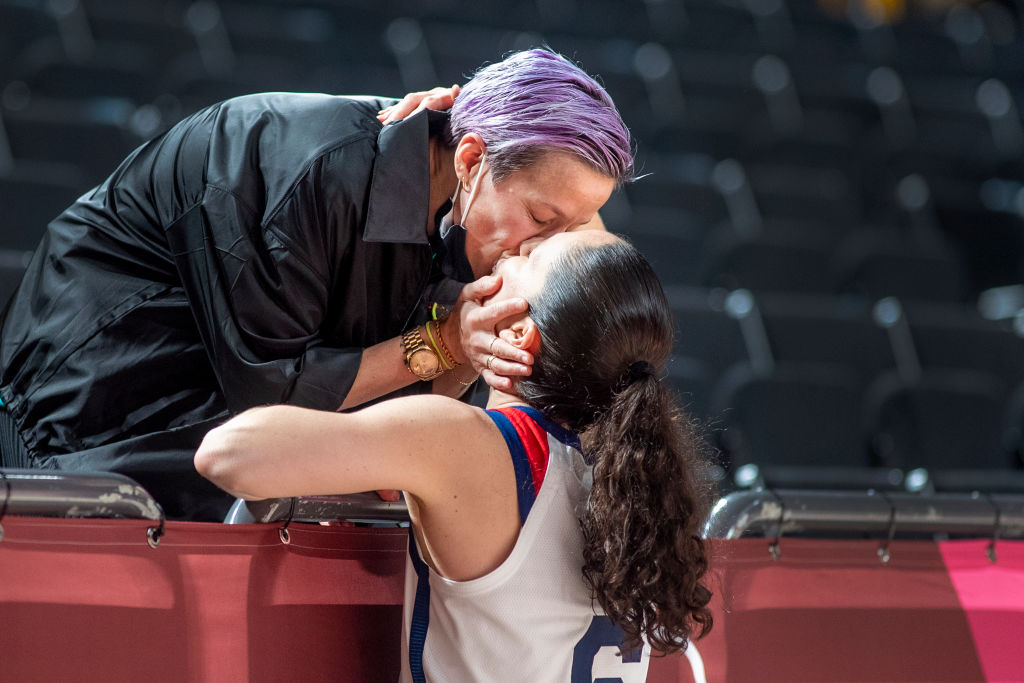 We got over ten thousand views in ten minutes at midnight on a Saturday, which is usually the slowest hour of the week, when ten thousand straight people googled “Olympics Basketball Gay.” 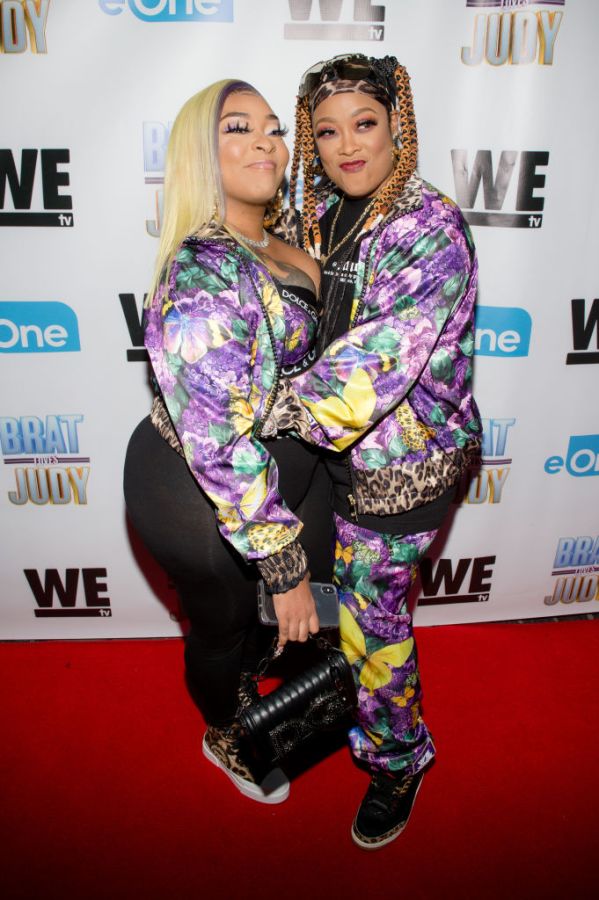 After the premiere of their groundbreaking WE TV reality show, Da Brat and Jessica DuPart were able to go public about their engagement, with the big proposal popping up in Episode Four of the series.

Niecy Nash and Jessica Betts Celebrate The One Year Anniversary of the Best Day Of Our Lives: Their Wedding

“Today… is the one year anniversary of when Niecy Nash and Jessica Betts announced the to the world that they had wed on August 29th, 2020,” announced Christina in that day’s No Filter. “It was a day that shook all of us to our core — a previously assumed heterosexual actress dramatically announcing that she was not straight via stunning wedding photos??? I was beside myself.” Nash and Betts celebrated with an entire week of pre-anniversary vibes, followed by an Anniversary Weekend celebration. A blessing!

Abbi Jacobson and Jodi Balfour Celebrate Their One Year Anniversary

Jodi Balfour came into our lives in Bomb Girls as Gladys, the straight girl Betty had a crush on and wow if Betty could see her now! Abbi and Jodi both celebrated their one-year anniversary by posting about each other on Instagram so we could all bask in the glory of their Autumn Love.

New pic of Elvira with her girlfriend. pic.twitter.com/Dj04jUgtzW

One of the biggest surprise coming outs of the year came from Elvira, Mistress of the Dark, who has been in a relationship for19 years! That was enough mystery for everybody and so the whole world was relieved to meet her girlfriend shortly thereafter.

After two years of dating, Dylan proposed to our fidgety fave Kristen Stewart and she said yes! They kept it under wraps until Kristen appeared on The Howard Stern Show in November, telling him, “We’re marrying, we’re totally gonna do it. I wanted to be proposed to, so I think I very distinctly carved out what I wanted, and she nailed it. We’re marrying. It’s happening.”

Candace Parker Gets Gay Married To Wife Anna Petrakova, Who By the Way is Pregnant

Rumors about a relationship between WNBA star Candace Parker and her former teammate Anna Petrakova have been swirling for years, but this month the world got the confirmation it deeply longed for when they straight-up got married AND announced that Anna was pregnant. “In all my time of writing professionally about gay things on the gay internet — 14 years in April — I have never had a piece of news affect me like this,” wrote Heather Hogan. “CANDACE PARKER IS GAY! SHE’S GAY MARRIED! AND HER GAY WIFE’S GOT A BABY ON THE WAY!”