Late last night, news that has apparently been “low-key in the tabloids for years” tore across the lesbian internet with unstoppable force when the latest edition of Kira Deshler’s Substack noted that 59-year old legend, actress and esteemed doll collector Demi Moore has a girlfriend. From the piece:

As it turns out, Demi Moore does actually have a girlfriend. It was rumored several years ago that Moore was in a “secret relationship” with a certain “gal pal,” but it’s been confirmed this week — by said gal pal, Masha Mandzuka, that they are in fact dating, and have been for a whole nine years.

The instagram post in question from Masha Mandzuka, published on November 11th, says she is “so grateful for 9 years of you!” followed by four emojis: a baby angel, a RAINBOW, a heart and prayer hands:

However, we here at queer website Autostraddle know that if there’s anything straight female celebrities like more than being gay, it’s not being gay but still acting really gay in a way that we find confusing and often frustrating. So we smashed all of our gay heads together and tried to figure this out.

The Case For Demi Moore Having a Girlfriend:

It turns out this rumor has been circulating for some time and this is not Masha’s first homoerotic birthday wishes to Demi Moore. In December 2018, the notably reliable Daily Mirror announced that Demi Moore’s “secret girlfriend,” 43-year-old Serbian stylist Masha Manandzuka, had revealed the child they’re “raising together.” The child was identified as Masha’s then-2-year-old daughter Rumi. Demi and Masha were identified as “smitten with each other.” They cited a “friend” at the time allegedly telling Radar Online that Demi had been quietly seeing Masha for the last two years. An article in The Daily Mail made note of that activity as well as Demi Moore “rocking baggy denim overalls” as she “stepped out in Beverly Hills amid claims of lesbian romance with fashion stylist.” 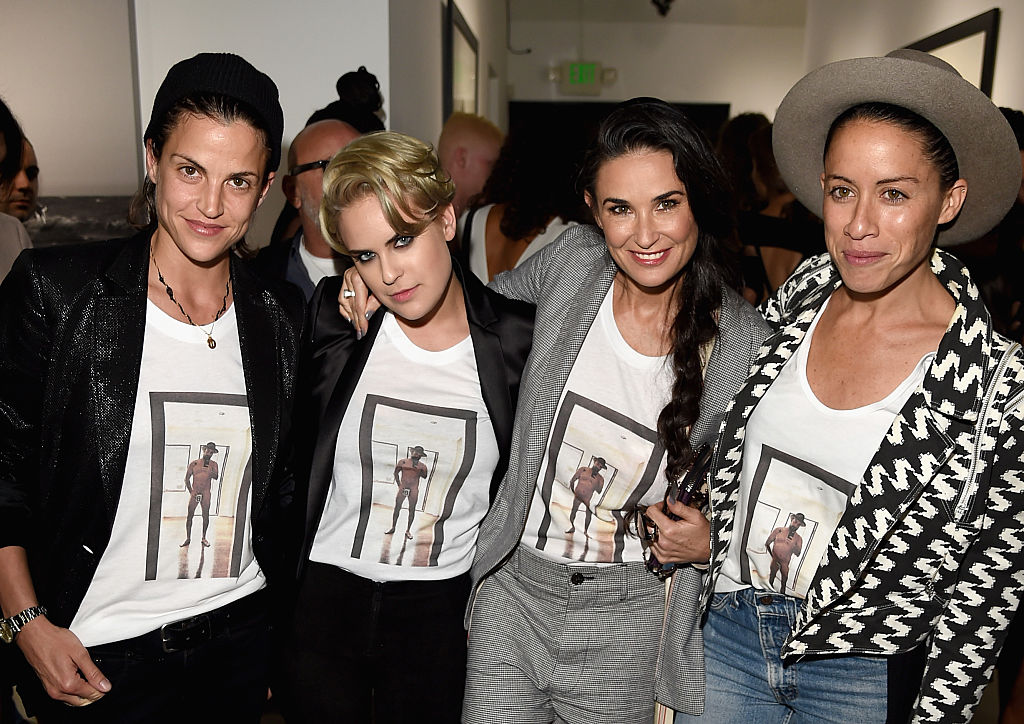 In-house Vapid Fluff Expert Stef reminded us that “we talked about [Demi Moore maybe being gay] in this [Slack] channel in 2018!” We also discussed it in a post on this website that I completely forgot ever happened!!! Upon revisiting the 2018 convo in question, it turns out that Senior Editor Heather Hogan said, at the time, “don’t worry demi. charlies angels: full throttle made me gay too.” Today, Heather expanded on that sentiment in a full statement, offered directly to me today in our Slack channel:

“One of the easiest and most popular ways to get gay in the early aughts was to watch Charlie’s Angels: Full Throttle, which not only featured Drew Barrymore, Cameron Diaz, and Lucy Liu crawling all over each other, half-clothed and in slow-motion, for an one hour and forty-seven minutes, but also Demi Moore, with a Hepuburn husk to her voice, high heels and lingerie and surfboards and licking the barrel of a gun talking about, “I was never good, I was great.” Which of course shepherded an entirely new era of lesbians into existence and quite frankly likely birthed both the Mommi movement and the desire most gay women have to be stepped on by sexy bitches. Hold that information in one hand and consider Ashton Kutcher in the other. Have you ever met a man with more goofus lesbian energy? He spent half their married life wearing Shane McCutcheon’s exact hair. Now consider the evidence in both your hands. Demi Moore’s gayness was completely inevitable.”

In 2018, Autostraddle writer Analyssa received a text message from her “worst ex” that read: “Hey Also Demi Moore is gay.”

In February 2019, Radar claimed to have “exposed” her “secret dates” with her “Serbian Sexpot.” They also noted that Masha is in an “open relationship” and that she and Demi are “often spotted on cozy walks around Hollywood.”

Masha’s instagram story includes memories like that time 5 years ago when Demi Moore and Rumer Willis were with Masha in the hospital for Rumi’s birth. Masha, Demi and Demi’s children Rumer and Scout often vacation with Masha and it appears that this is, at the very least, a romantic friendship. Also, Masha gives off intense, constant gay vibes. It seems incredibly unlikely that Demi Moore has basked in Masha’s gay light and not at some point considered being gay together?

In a recounting of Demi Moore’s past relationships, US Magazine’s last noted fling with a man is a rumor from 2013.

The Case Against Demi Moore Having a Girlfriend:

Managing Editor Kayla Kumari and her straight best friend, “the biggest Demi Moore stan on the planet,” came to the conclusion, post-deep-dive, that “it does seem like a longtime family friend situation.”

This impression is backed up by another recent post from Masha which refers to Demi as a “friend”:

In the memoir mentioned in the above instagram situation, Demi refers to Masha as “a friend” and “another single mom” in the Epilogue. In the acknowledgments, Demi thanks Masha and Rumi, saying that she is “overflowing with gratitude to you and to the universe for bringing me both into my life. For allowing me the privilege to being part of your lives, to witness the magic and growth of this incredible little being you have created.”

Aforementioned Demi Stan and best friend of Kayla Kumari did circle back mere hours later with this quote: “Demi Moore is gay. Oh my god. DEMI MOORE IS GAY.”