Hello, cinnamon buns! Did the weather turn unexpectedly cold for anyone else this week? My dog Cyrus and I have another pupper houseguest this week, and I’ve been opening the windows, putting the heavy comforter on the bed, and falling asleep with one dog tucked in on either side, down by my feet. I really can’t recommend it highly enough.

This week, Reneice made cheddar apple and impeachment crackers, because fuck yeah she did!

Heather brought us a handy list of Batwoman’s most bad-ass moments over the years, just in time for the pilot of her new show on the CW – which was fun and gay and good!

Al(aina) wrote about Young M.A’s debut album and why it’s the soundtrack of their black queer love story.

Adrian reviewed Wait, What?, the new comic book about puberty and sex ed that was illustrated by Isabella Rotman! Friends, I read this book, and it traveled back through time to heal twelve year-old Queer Girl.THAT’S how good it is.

The Silent Mode Award to Snaelle: 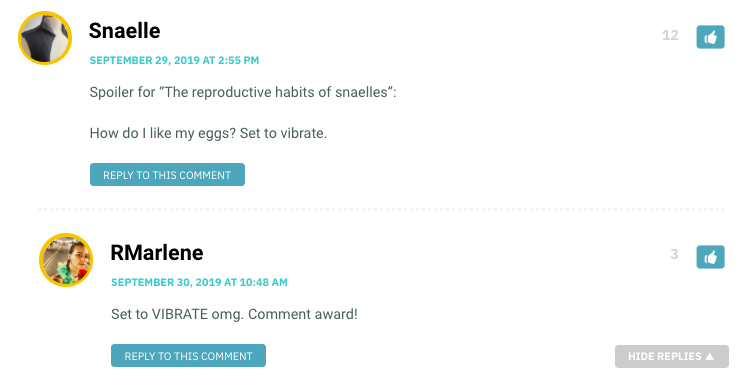 On “Untitled Goose Game” Is an Adorable Fifteen-Dollar F*ck You To Authority:

And the This Too Award to alice:

On ‘Wait, What?’ Is the Body-Affirming, Gender-Expansive Sex Ed Comic Preteens Need:

On Monsters & Mommis: “Cat People” and “The Seventh Victim” Come Out of the Closet:

The Cat Person Award to Al:

On Katie McGrath Is the Bisexual Lawyer of Your Murder Vibe Dreams on “Secret Bridesmaids’ Business”:

The Hello, It’s Me Award to Bex:

On The CW’s “Batwoman” Review: A Really Fun, Super Gay Romp — and Ruby Rose Is Great:

And on Call for Submissions: The Power Issue:

The Watt’s Up Award to Carmen SanDiego and Kristana: