It has been far too long, but Katie McGrath is finally kissing girls on our screens again. This time it’s an Australian miniseries called Secret Bridesmaids Business, which is a dark and twisty tale of three best friends with questionable moral compasses.

The show, as a whole, is complicated. There are about five different stories going on at once; four of them could be arcs from Pretty Little Liars: All Growed Up, and the fifth is basically #YouOnLifetime. So what I’m saying is, prepare to be stressed out. The entire time. Everyone is making truly terrible decisions, no one is talking to each other, and it seems like someone could get murdered at every turn even though no one has been murdered yet. It just has a murder vibe.

But what it also has is a gay vibe.

Secret Bridesmaids’ Business is primarily about Olivia (played by Georgina Haig aka Elsa from Once Upon a Time) and her two best friends, Melanie (Abbie Cornish) and, lezbehonest, the reason we’re all here: Saskia (Katie McGrath). Olivia and Melanie’s dramas are boyfriend/husband/cheating related, and while I am invested in their overall safety and the trio’s friendship, I’m obviously here today to talk to you about a certain bisexual lawyer with a killer jawline. (Maybe literally by the time the series is up WHO KNOWS.) 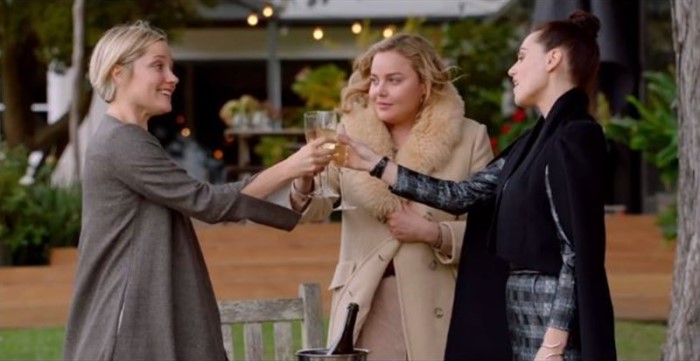 We are halfway through this six-episode series, and we don’t know all that much about Saskia’s past yet, but we do know a few things about her. Like we know she’s in love with Olivia. Olivia’s fiance says as much in the very first episode. Saskia denies it and accuses him of being binary and reductive in his understanding of bisexuality, but we, the audience, know he’s not wrong. Saskia and Melanie were part of Olivia’s boyfriend’s plot to propose to her, and you can tell the entire time that Saskia is miserable about the whole endeavor. She’s supportive of her friend but reluctantly so, and it’s a mood if I’ve ever seen one. At first I wasn’t even sure if she knew if her “he’s not good enough for you” feelings were a direct result of her “but I am” feelings but as time goes on I think she knows exactly what’s going on. Between her overly caring gestures — tucking a drunk Olivia’s hair behind her ears for her, for example — and her seemingly unwarranted (at first; eventually it’s very warranted) disdain for Olivia’s boyfriend, her longing for her best friend is very relatable. 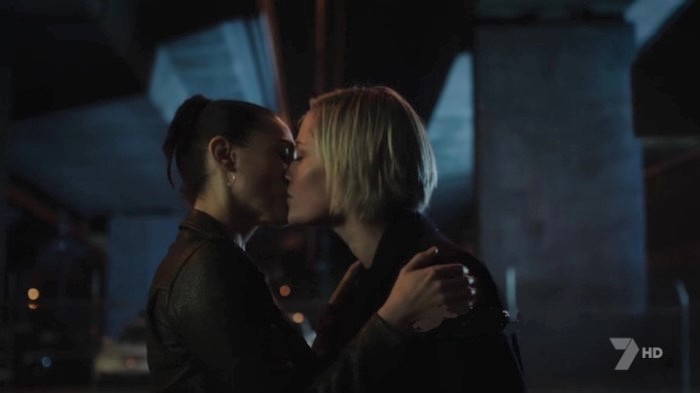 “Joke me something awful just like kisses on the necks of ‘best friends’.”

Saskia, refusing to take advantage of Olivia, and knowing this isn’t how she wants this to go down, puts her best friend in a ride share and sends her home. And then immediately goes and seduces a girl from a taco truck.

I don’t know how that taco truck didn’t explode from the heat of this LOOK. (gif courtesy of my friend Nic)

She is, pardon my French, fucking her feelings away, and I think the way this is explicit in the show exonerates her from the trope. And also, Saskia owns it all. Her bisexuality, her unwillingness to “settle down,” all of it. And she enjoys her one-night stands; she doesn’t have any kind of gay panic about them or anything. She even takes a bath with the taco truck girl. 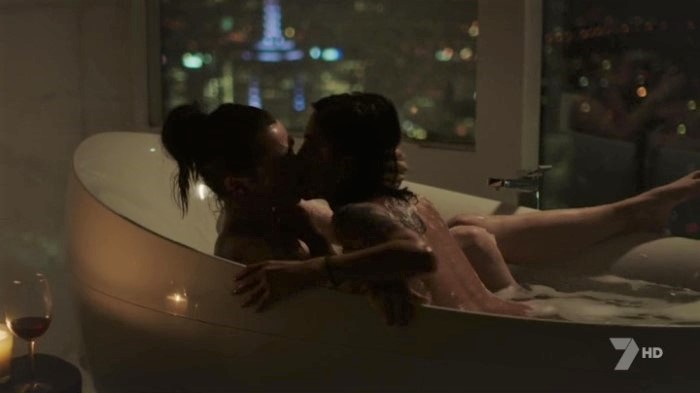 This undid some of the damage Below Her Mouth did re: bathtubs for me.

In the third episode of Secret Bridesmaids Business, Saskia displays classic “in love with my best friend” behavior, which is being overenthusiastic about your unrequited love’s new love interest. Sure, they finally break up with what you thought was the only obstacle between you and then ended up sleeping with someone who wasn’t you BUT BY GOLLY ARE YOU GOING TO BE THE VERY BEST FRIEND THEY’VE EVER HAD BY ASKING THEM FOR DETAILS LIKE THE GOOD EMOTIONALLY MASOCHISTIC GAY YOU ARE. It hurts to watch, but it hurts so good.

Maybe someday this will stop feeling novel, but for me, Saskia’s bisexuality not being A Thing still feels really good in my soul. Everyone on this show has a secret, most of them are big (and even dangerous) secrets they’re terrified will come to light and would do anything to keep hidden, secrets that do come out and start to wreak havoc, just… so many secrets. They’re seeping out of every crack. But Saskia’s queerness isn’t one of those secrets. Not from herself, not from anyone. It’s refreshing, frankly. Especially if you think of the shows whose vibes I mentioned are sort of reflected/refracted in this show; Pretty Little Liars wielded Emily’s queerness as a weapon in season one, and #YouOnLifetime used Peach’s obsession with Beck against her. And no, I didn’t realize that I was talking about two of Shay Mitchell’s characters until after I finished that sentence. I stand by it.

I really look forward to the back half of this series and even though they’re calling it a miniseries I’m already hoping it pulls a Big Little Lies and finds a way to make more episodes.