Oh, Grey’s Anatomy. Why you suck so hard? You give us mere glimpses of Callie and Arizona, and then you fuck it all up by suggesting they might break up because Callie wants kids and Arizona would rather have dogs and chickens.

+
You suck. Hard. We deserve better, and so do the very talented Sara Ramirez and Jessica Capshaw. And if Callie ends up with that sex-tape fuckwit Mark Sloan, I will never ever watch you again. So THERE.

Last week, Lilly Scott got voted off American Idol (wah!). People Who Know These Things say that’s partly because the song she sang (“I Fall to Pieces,” made famous and amazingly smooth by Patsy Cline) was too “old.” That’s no surprise, because this show ages everyone. Every time I watch, I can feel my cellular membranes mutating and crumbling and weeping.

That said, pitch-perfect Crystal Bowersox is consistently great. What an ear! 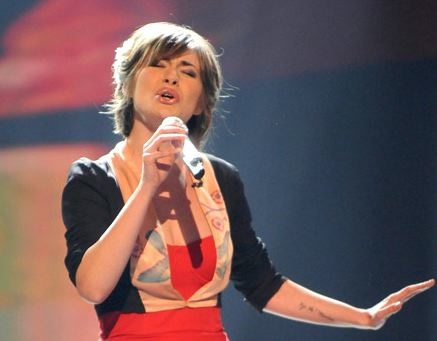 The rest of the ladies are kind of meh, and I’ve been studiously avoiding the boys. I used to dream of the day that we’d have a real-life lesbian (maybe even a riot grrrl type) on American Idol, but now I’m too busy dreaming it’s over. Hey now! (Yes, I just made an ’80s song reference, because I wish Idol still did ’80s and ’70s and ’60s and Broadway nights — you know, I wish it actually focused on music.)

At least we have Ellen DeGeneres. The woman knows how to wear a tie. Her judging is less exciting, but it’s miles better — more genuine, more English — than everything Kara DioGuardi has ever uttered.

I tried, really and truly, to get caught up in the plight of “dolls” and their postmodern, post-individual, post-everything world, but, well, I was terrified of dolls as a kid, so the whole idea played on my childhood nightmares of dolls turning into people and smothering me in my sleep with their frilly petticoats. Different kind of dolls, yes, but still horrifying.

Anyway. I do appreciate Eliza Dushku, especially when she gets all badass (and bonus: she never wears petticoats. Er, does she?). 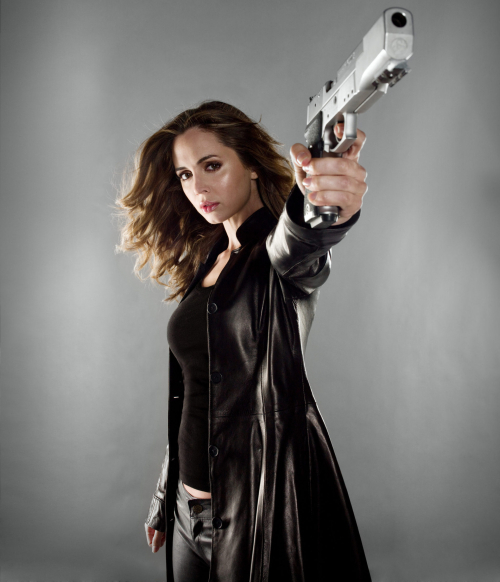 I promise to try again to watch this show. And then I’ll start all over with Buffy again, just for the joy of more Dushku and more scary things that turn out to be amazing. Well, except that it’s canceled now, so… never mind!

If I could choose my own boss, I would choose Leslie Knope (Amy Poehler). She is dedicated and efficient, yet she is fully off her rocker. Talk about an ideal working environment.

+
Meanwhile, Ron Swanson (Nick Offerman, aka Mr. Megan Mullally) has begun to grow on me — that’s why he won “woman of the year” in a recent episode. And April is hilarious, even though her flirtation with Andy is too similar to the Pam and Jim thing (and simultaneously not half as sweet as the Pam and Jim thing). Even the bit players are terrific, like the sassy Donna. The only thing that would improve Parks and Recreation is the departure of Aziz Ansari, but Mark Brendanawicz (Paul Schneider) is leaving instead. No, Paul: don’t do this! You’ve already failed John Keats; must you fail me too?!

This is the sort of show you can half-watch at work and still feel entertained, as long as you fully watch the Veronica (Portia de Rossi) parts. She’s acerbic! She’s gorgeous! She’s probably a card-carrying member of No Kidding!

And how great was the competitive bagel-tossing game called Linda (because it was invented by assistant Linda)? if you watch The Ellen DeGeneres Show, you know that Portia herself is really competitive, so it was like being in her backyard. But without the F-bombs.

+
Actually, scratch that thing about watching Better Off Ted at work. Because the last time I did that, I started thinking I was actually employed at Veridian Dynamics, which is not as fun as it sounds. Especially without Veronica and Linda and bagels.

I don’t watch this show, despite the hotness of Mariska Hargitay, Stephanie March, and Tamara Tunie. They can’t balance out the ick factor for me — this is an entire SHOW about women as victims. That would be fine if the show sought to educate and enlighten, but it offers up a lot of comic relief for things that just aren’t funny.

However, there was that one episode recently where Kathy Griffin showed up and twisted the comic relief into camp. And that actually was kinda funny! Griffin played a wacko named Babs Duffy, the leader of an activist group called LezBeStrong.com (yes, the domain is available if you feel inspired). The episode was chock-full of quippy, quotable lines — and she even said “dominant heteronormative paradigm.” 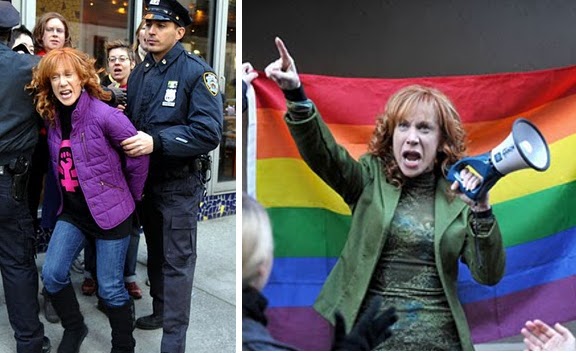 The other lesbian characters were reasonably realistic, with one ridiculously ragey exception who was rightly described as “psycho” and seemed right out of Beebo Brinker. There were also many Broadway vets in the episode (including Sutton Foster), and what looked like a lot of actual NY lesbians in the crowd (if you were among them, regale us with your SVU experience!).

And, of course, Babs tried to kiss Olivia Benson and was rebuffed — “I’m straight,” mumbled Olivia. But every lesbian in the audience shouted “Amen” when Babs explained her motivation: “Come on, I mean: the job, the gun, the attitude. You’re like Ellen, Joan Crawford, and Calamity Jane all rolled into one. You can balance a checkbook, I’ll thrown in Suze Orman!” 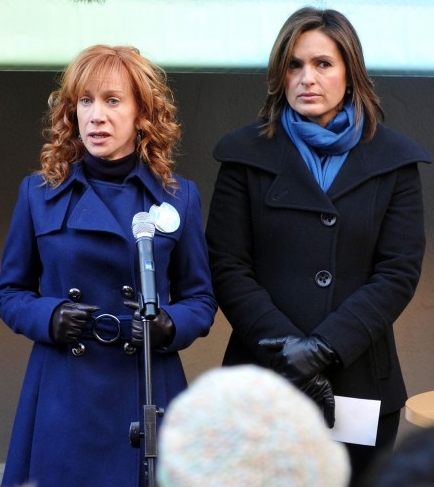 Olivia even pretended to be gay at one point, and the whole thing was a nice nod to the wealth of SVU fan fic on the web. But the idea of a series of “attacks, murders, and rapes” of lesbians … again, just not funny, and an appalling premise for a show.
+

Watching Spartacus is like falling asleep in history class and having an R-rated dream about Xena. And then you wake up, and BAM! It’s all real! Well, not real, but certainly realistic, what with all the gore and fornicating. There have been lots of naughty scenes, featuring every combination of body parts imaginable. I’ll drink to that! 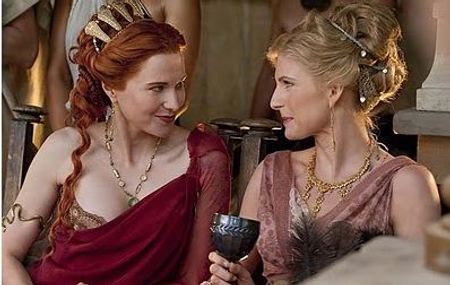 But maybe the best (and possibly even the gayest) part of Spartacus is the way Lucy Lawless is often exactly like Xena. There are always women chanting and ululating in the background as she gazes out over her kingdom. 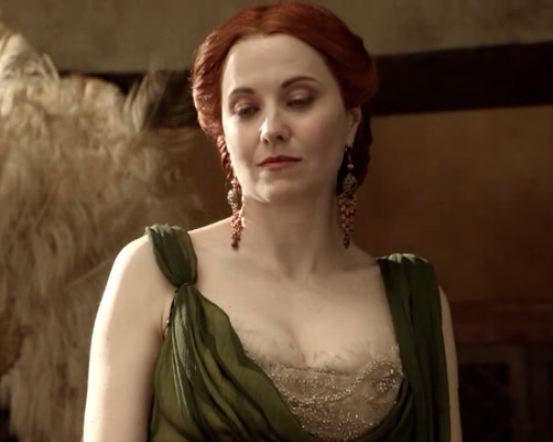 It’s like we’re still happily ensconced in the ’90s and The L Word never happened!

I resisted Modern Family for a while — what a hype-o-rama — but now I find it irresistible. It also makes me feel a little like a gay man trapped in a lesbian’s body, because every time Cameron is on the screen, I want to raise an Asian baby with him.

Fave recent moments: Gloria helping Claire when her trenchcoat got caught in the escalator; Lily’s first word and the mention of her lesbian godmothers; everything involving Manny the mini man (and mini lesbian, somehow).

+
There aren’t enough women on the show, but Julie Bowen brings the funny every week — and she’s brainy, too, as evidenced by her recent almost-as-smart-as-Jane-Kaczmarek appearance on Celebrity Jeopardy. (Dana Delany competed too; Bowen and Delany should start a MENSA for hotties! And speaking of hotties, seriously, in what universe would Sofia Vergara be with Ed O’Neill? Ugh.)

Soooooo that’s how I’ve been frittering away my time over the last couple of months. And I’m soon to be even more glued to the set: The United States of Tara, Nurse Jackie, V and Glee are all coming back! Those are all way way better than most of the shows I just rambled on about, so see: you’re all caught up and can just get to the good stuff.

You should also give us your own good stuff, aka a scintillating survey of your recent tube viewing: commence commenting.