Hi crush monsters, this is the fifth installment of Straddler On The Street, a feature where I celebrate all of you incredible Autostraddle readers by hunting you down, demanding you chat with me, and then writing about you on the Internet so we can all crush on you. Get excited, because butterflies in your stomach 24/7 is a fantastic way to live.

Straddler On The Street: Tiara, 27

If you’ve a regular Autostraddle reader, you probably know Tiara – or Creatrix Tiara, as she’s known around these parts. She’s been an avid reader and commenter for years, and frankly I think her gravatar is as much a fixture of AS as Riese’s epic recaps or Robin’s gorgeous calendar girls, ya know?

When she’s not busy giving us all a piece of her mind, Tiara is a graduate student studying and living in the Bay Area by way of Malaysia and Australia. Her studies focus on using creative methods to express the intersectionalities of being a queer female migrant minority, and her work includes everything from political burlesque pieces to personal performance poetry. You can keep up with Tiara at her website, but before you jump over there get to know her a little bit right here, right now. Also! If you’re a Joan Jett look-a-like, Tiara would love to hear from you. Just FYI. 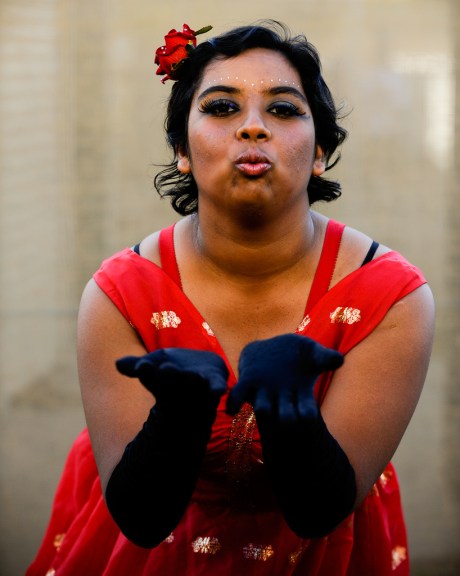 You’ve been commenting on AS for a long time. What does the community mean to you?

I’ve made some good friends via Autostraddle comments. I went to A-Camp and I was surprised that the AS team was really happy I was there. Alex in particular. She was like, “I’m so glad to finally meet you.”

Why were you surprised!

I thought I was more of a rabble-rouser in the comments, and I was thinking, Urghhh they’ll think I’m a troublemaker. But even if I am, they didn’t seem to mind.

We like rabble-rousers, as long as they’re respectful slash not trolls! Anyway! What’s your #1 favorite thing about the Bay Area?

The Bay Area definitely has a far stronger QTPOC community consciousness than either Malaysia or Australia. I like how you can be any sort of weird multi-axis minority and there is a group for you. Queer person of color with disabilities? A group for you. Artsy poly people? Group for you. Whatever your flavor, you’re never really alone.

Speaking of being a minority, what does being a queer female migrant minority mean to you?

It means that all my experiences are filtered in some way through all those lenses — and then some — at once. I can’t easily separate one lens from another. My understanding of sexuality and gender, for example, is highly shaped by my experiences growing up. Just in my childhood I learnt about three or four different concepts of relationships, and then I traveled overseas and there’s three or four more!

Can you expand on what you mean by concepts of relationships?

With my Bangladeshi family, relationships and marriage are largely about care-taking. Romance or sexual attraction is secondary. Then I moved to the Western world and noticed more and more how sexual attraction seems to be paramount: if there’s no sex it’s not “really” a relationship. If you want benefits you need to marry someone, and a lot of guides and rhetoric emphasize sexual compatibility as the key factor, sometimes before other things. And as I embraced non-monogamy I got to see other models of relationships.

Do you find yourself feeling like an outsider when it comes to American culture?

Well, being born Bangladeshi in Malaysia means that I was always the “Other.” In Malaysia things are often separated by Malay/Chinese/Indian and I was a piece that didn’t fit. I still don’t really feel like I have a home. I feel most at home in transit, on a plane or a train, on a journey. Settling down seems weird.

I definitely felt isolated. I grew up in kind of the middle-of-nowhere; the only thing to do was hang out at the shopping mall, so I was often homebound with only my computer for company. I had to deal with intense racism and ostracization growing up. I had very few friends. The internet was my one solace. Online I could be me however I wanted to be and have people be okay with that.

What were some of the websites you used online (seeing as AS sadly didn’t exist in 1994)?

I was a very prolific Savage Garden fan-fic writer. Oh, geocities. I was on ICQ a fair bit. I made a string of personal websites. I was blogging before blogging was a thing. I remember Kiwifruit, Diaryland, Livejournal, Deadjournal.

“Being a queer female migrant minority means that all my experiences are filtered in some way through all those lenses at once.”

Did your sexuality factor into any of your online personas?

It took me a while to work out that I wasn’t straight. It wasn’t until I fell head over heels for one of my best friends that I went, “Ok, self, you are definitely queer.” My only real outlet for sexuality was fan-fiction. I can still remember a Harry Potter femmeslash piece where Hermione is observing the way Pansy’s skirt moves, and it was sexy as hell and I was turned on before knowing what “being turned on” meant.

And when did you come to terms with your sexuality in an offline scenario?

I moved to Australia and met Mark, my first-ever boyfriend [who was also my first-ever] everything. We had a good 6 years together. But halfway through those years “I Kissed A Girl” came on and I realized, If I don’t kiss a girl soon I will be very unhappy. Mark was really supportive about me being queer. He’s really the reason I was able to come out at all. A lot of queermos doubted and questioned my sexuality, and here’s this White Straight Cis Guy who is supposed to be my “enemy” but is the one person out of everybody who accepted and affirmed my identity.

But you’re no longer together?

I was fraught with the realization that I didn’t really want to be sexual with him. I loved him to bits and wished there was more social respect for non-sexual love. We were already non-monogamous, and I tried to make it work. We were on the brink of getting engaged, really, and when things didn’t work out I felt like I was letting a lot of people down.

That can be the worst. But now you have a wonderful girlfriend who you live with, yes?

Yes! Things with Phia and I are going great! It’s still really new and living together has been pleasantly interesting. Separate bedrooms, I highly recommend it.

Okay my girlboifriend and I have talked about separate bedrooms and it feels like such a smart idea, although obviously in NYC it’s a total pipedream. But can you talk about why you like it?

Hahahaha! They are a lifesaver. Because you get to control your own mess, you get to sleep on your own chosen mattress, you get a space to zone out or be a llama if you need to, and you don’t have to run your life by the other’s schedule. If you are non-monogamous then you can bring lovers over and it won’t be awkward. I [feel] like half a floor and half a bed really [aren’t] enough space for me.

Wait, be a llama?

One of my classmates works at a therapy farm and was telling me about how the best thing you can do for a llama is to leave it alone, since apparently they’re not very social. I loved that so much that now my code for “leave me alone, I need alone time,” is “I’m a llama.”

That’s incredible. I’m probably going to steal that. To conclude: Can you give any advice for someone who has never been in a non-monogamous relationship before but would like to try it or explore it?

Communication! Which goes for any relationship really. Don’t get bogged down by what relationships are supposed to look like. I read an essay about relationship anarchy and it really resonated with me. We tend to privilege certain types of relationships over others, but each relationship dynamic is unique. Feel free to play around with your particular wants, needs, desires. Don’t worry too much about how you’re “meant” to relate. You do you (and others)!