Hi crush monsters, this is the tenth installment of Straddler On The Street, a feature where I celebrate all of you incredible Autostraddle readers by hunting you down, demanding you chat with me, and then writing about you on the Internet so we can all crush on you. Get excited, because butterflies in your stomach 24/7 is a fantastic way to live.

Straddler On The Street: Robin, 27

Robin, age 27, describes herself as a “hopeless romantic with a liberal dash of cynicism.” She’s from Long Island and currently lives there, and she went to Marymount Manhattan College on the Upper East Side of NYC. She’s a content writer by day, guest blogs on the Society for Menstrual Cycle Research and frequently refers to herself as a “weirdo behind a computer.” Basically she fits right in here, ya know, weirdos?

Robin also moonlights as a competitive amateur boxer, which is pretty much the coolest thing in the galaxy, so we spoke about that a lot in the interview. Before we get to that though you should know that Robin also loves to cook, bake, sketch, play guitar, and make her own peanut butter! She makes a delicious brown sugar maple pecan butter that she’s dubbed “CRACK Butter” and she recommends pairing Peanut Butter & Co.‘s White Chocolate Wonderful with your morning yogurt to make something akin to an ice cream sundae (!!!).

Robin’s biggest goal for 2013 was to make the Championship bouts of the 2013 NY Daily News Golden Gloves Tournament and fight in the new Barclays Center in Brooklyn, but unfortunately due to an ankle injury she’s going to have to sit this year out. Though she’s bummed, she assured me that she’ll be competing in that tournament next year, and in the meantime will continue to train and fight in shows in the New York metro area. Just know that if your jaw is on the floor right now because you can’t handle how fucking fantastic Robin is, you are definitely not alone. 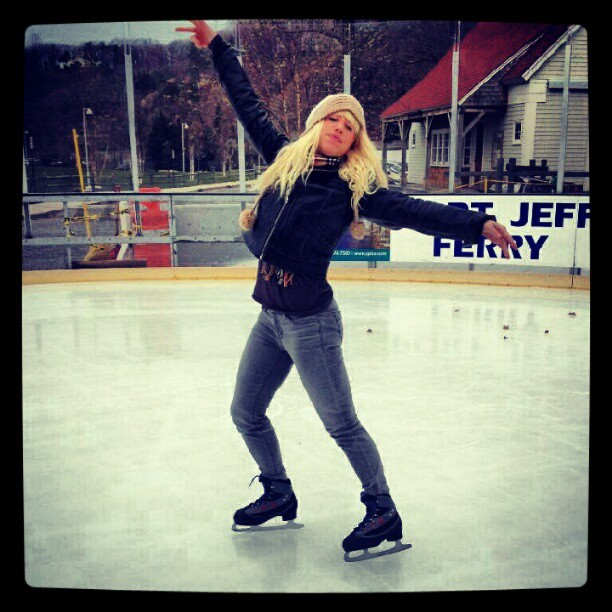 ‪Okay, tell me all about boxing!

I started actually boxing four years ago, but had the itch many years prior! My dad grew up in Brooklyn and trained as a fighter, and he introduced me to it at a young age. I think it was genetically wired in me to do it.

I’ve never ever spoken to a boxer before so I am crazy curious. What do you do and how do you train?

The training regiment is the hardest thing I’ve ever done in my life other than getting sober. I run in the morning and do strength training before work. I go to boxing for a few hours after work and we do basic bag work, mitts with the trainers, and spar both girls and guys. You basically get your ass kicked and screamed at by drill sergeants. It is a ginormous commitment, but I enjoy it. When you want something bad enough, you’ll go to great lengths to achieve it.

Are there a lot of female boxers?

I’m often one of the only girls in the boxing gym at night. I train at Heavy Hitters Boxing Club and it’s a “dungeon,” sort of like Fight Club. I love it. It’s just a dirty, down-home boxing club. The community is growing, though, and women are definitely taking to the sport, which is wonderful to see. But right now we are few and far between!

Do you fight both men and women in… fights? Are they called fights? I don’t know any of the lingo, I’m sorry!

When we “train” fight it’s called “sparring.” I can spar both guys and girls, and I do. There’s no all-female aspect to it, and I find the gender blending refreshing! You often “work” with the person you’re in the ring with, like let’s say I’m sparring a guy that has 50 pounds on me, he’s not going to hit me as hard as he can, just like I wouldn’t give all of my power and skill to a brand new girl fighter that I was sparring. The only time gender comes into play is during sanctioned fights. I am a registered, licensed, New York Boxing Metro fighter, so I participate in sanctioned fights. That’s when I am matched with girls in my weight class and the whole nine yards: officials, judges, audience and a shit ton of nerves!

So when you participate in a sanctioned fight, you would only fight other girls?

Right, the sanctioned fights are strictly girls fighting girls and guys fighting guys, although I think I could take a few dudes.

Boom! If a girl wants to get involved in boxing, what should she do?

I’m specifically familiar with the process in the NY region, and I’d recommend checking out the NY Boxing metro site. But if you’re a newbie in another state, I would just Google “boxing clubs” in a specific area. My advice for all girls looking to get involved in boxing is to have a lot of courage knowing you’re going to be one of few women and then go for it! Starting something like this is frustrating and hard, but it’s so worth it!

You said training is the hardest thing you’ve done aside from getting sober. Did you get sober because of boxing, or was it a separate struggle?

I’ve been sober for five years now, and it was a struggle I went through prior to boxing. It actually had everything to do with coming to terms with my sexuality, sadly. But now it’s something I am proud to discuss. I know it’s made me stronger in so many ways: I live a healthier life, I box, and I can be myself proudly. 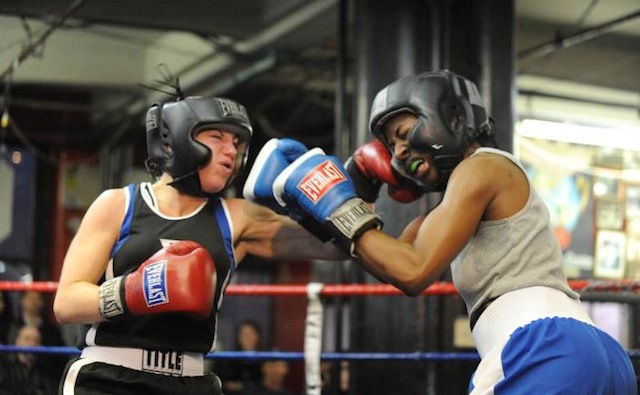 Robin (left) in the ring!

That is amazing. Congratulations!

You told me you’ve been making an effort to live more “out” in the past six months or so. What brought on that decision?

When I got sober it felt great to finally be healthy in the physical sense, but I was still mentally struggling with being closeted. I began slowly coming out to friends, and I began feeling better. Coming out to my parents was so hard for me, as I’m sure it was/is for most gay individuals. I finally told them about a year ago and it was one of the best days of my life. It felt like I had come out to the world! Now I want to embrace the community more and immerse myself in it because I know I truly missed out on that by being closeted. That’s why I attended the Autostraddle Meetup and why I continue to try to muster up the courage to do things outside of my comfort zone!

It sounds like you live a really healthy, excellent life now. It makes me so happy for you, especially because the sad stories are the ones that are often more familiar in our community.

Thank you for the encouragement, really. Hearing that never gets old and really helps me keep on keepin’ on! I’m sure there are a great deal of gay individuals who struggle with all kinds of addictions, simply as a result of feeling so subjugated and repressed by society, family, or worse, yourself. But it gets better, I promise!

Do you have any words of wisdom for someone working on getting sober now, or maybe you can just share your own personal feelings about what it took to make you realize you wanted to get sober?

Absolutely. No one can make you get sober but yourself, and that’s the biggest reality of the situation. For me personally, hearing how I ruined countless events and holidays, scared my family and friends shitless on a habitual basis and simply continued to self-destruct were all pieces that motivated me to get sober.

If you’re struggling with a problem, you know that the drugs/alcohol only exacerbate the real reason you’re so depressed. It took a final drug/alcohol episode that landed me in the hospital with a minor health concern – inflammation in my stomach causing severe pain for days – to compel me to get clean. I knew that I had to make the change, be strong, and face my reality without a purple haze, and it really was the best decision of my life. The support I got from real friends and family was more than I could ever articulate.

There are instances, undeniably, where I wish I could drink, mainly for the social aspects, and because dating for a predominantly “femme” dyke like myself is hard when you’re not always wearing your sexuality, but I wouldn’t trade my sobriety – or my drug-stained past – for anything.

Thank you so much for sharing that. I know it is so personal but I honestly think learning that other people struggle with the same issues can help other people make the decision to change and be sober and that is so important for our community. So thank you.

Yeah, of course! One other thing is that boxing, which has sort of become my savior – as corny as it sounds – has helped me embrace an entirely new strength within myself.

It’s so cool that boxing can act as such a positive tangible health-filled thing in your life.

Yeah, it is a great thing. I mean don’t get me wrong, boxing comes with its struggles as well, but it’s much healthier than drugs and alcohol!

Haha, I would imagine so! Now, my final questions. One, how did you discover Autostraddle?

I was desperately Googling for some lesbo-tastic info and I delightfully stumbled upon it, saying to myself, “WHERE HAS THIS BEEN ALL MY LIFE?” That happened only about seven or eight months ago!

That makes me so happy! That is why we exist!

It was one of the best lesbian-related things that’s ever happened to me!

Yay! Is there anything else you’d like to tell the Autostraddle community?

I guess that I’m single and ready to mingle! And that I’m really happy to be connected to the Autostraddle community because everyone is super supportive and wonderful to one another here. 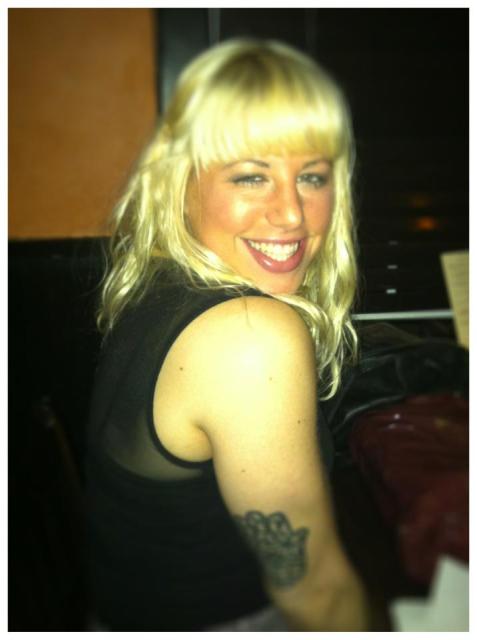 Did I mention that Robin is a badass and makes her own peanut butter?