Welcome back to “Boobs On Your Tube”! Do you know what we did this week? Watch a lot movies, that’s what! Kayla took this week’s dive into Autostraddle’s lost movie archives and declared that, “Eroticism Isn’t a Distraction in Circumstance — It’s Vital!” Stef watched the infamous Vanessa Hudgens’ property The Princess Switch on Netflix, and was sad to discover out that, in fact, it does not contain a princess switch.

Then it was Holigay Palooza! Heather wrote a review of Happiest Season that will very likely leave you in a puddle of tears sniveling into your sweater. Then Carmen and Shelli had a double hitter for A New York Christmas Wedding — first Carmen with the review, and Shelli with a timeline of her own coming out, set to the movie’s fashion choices.

The weather’s getting colder and the holigay season is going to look a lot different than in years past. But we love you and we’re sending you some warmth and maybe some fun things you can watch to pass these long days.

+ Remember last week, when we were so excited about the promotion of Chantal Thuy’s Grace Choi to a season regular on Black Lightning? Well the CW giveth and the CW taketh away. Today it was announced the upcoming fourth season of television’s first major Black-led superhero show will be it’s last. Heather has a lot of very angry thoughts about this (and rightfully so!) that I encourage you to read.  — Carmen

+ So, I finally started Cable Girls. After becoming obsessed with Elite I was looking for something similar and I can’t believe no one told me there was a show where a Spanish Quinn Fabray kisses girls!! I’m not very far into it but I would die for Carlotta and hope that never changes. I’ll report back when I’m done! — Valerie Anne

+ Valerie Anne has finally caught up on Coroner and I am busily catching up on Filthy Rich, so we will both be back next week with all the parts of note.  — Carmen

+ All Rise returned this week with what I thought was a really strong episode for Simone Missick but without a lot to do for Marg Helgenberger’s Lisa Benner. Fingers crossed that we see more of her this season! — Natalie 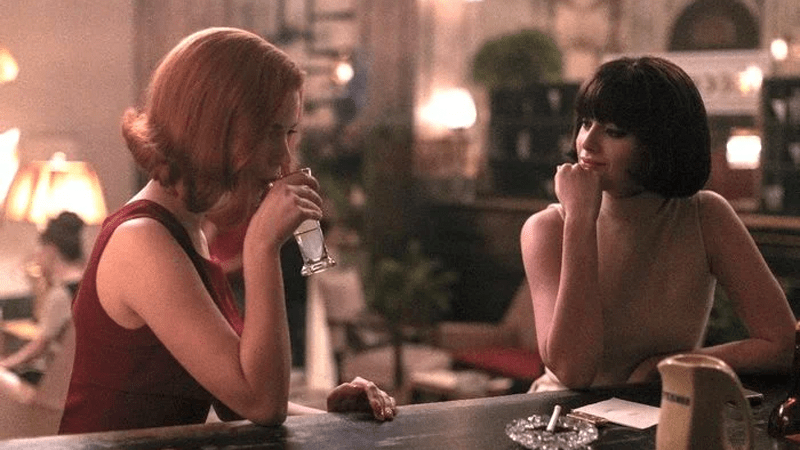 Okay. So. Right from the start, everyone sold The Queen’s Gambit to me all wrong. It was all, “Oh, Heather, you have to watch this, it’s about a queer chess prodigy who destroys every man she plays a match against.” Which: yes. That show would be catnip to me. Unfortunately, while that might be one way to describe Netflix’s new period piece darling, it’s not how I would describe it because it sets unreasonable expectations for the amount of queerness shown on-screen and the amount of chess destruction compared to self-destruction our main character, Beth Harmon, gets up tp.

The series only has seven episodes, and it takes until almost the end for something really queer to happen. Beth, the aforementioned chess prodigy, flirts with French model Cleo, while studying chess with her friends, then flirts with her at the bar, and then finally Cleo says, “Do you like to fuck?” and Beth says that, in fact, she does. Unfortunately the bender and fucking throw her off her game, literally; she loses the most important match of her life the next morning. Beth nearly destroys herself after that loss, but the man she’s in love with, Townes, pulls her back from the brink and also helps her work up a strategy to win her next biggest match ever, and become the best chess player in the world. Townes, though, is gay. So that’s a no-go for him and her.

I totally understand why people are in love with this series. It’s beautiful and brilliantly acted, but it’s not for me. It’s a little too damsel in distress, and I’ve never seen anyone pop more pills than those kids on Skins and it stressed me out! 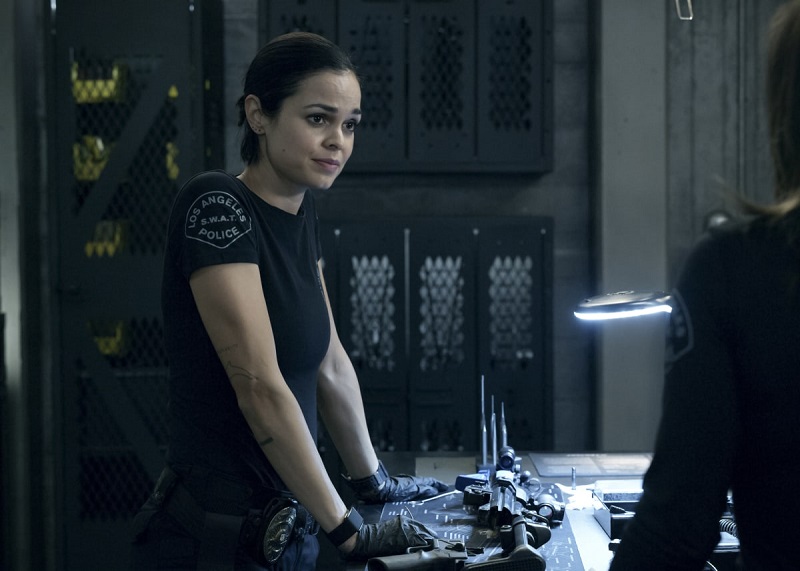 During the height of the summer’s protests, there were a lot of conversations about what becomes of the police procedural, a popular genre of television that has fueled our misconceptions about law enforcement. It’s too early yet to see if those conversations bore any fruit — or if they were just Hollywood’s version performative activism — but if there was a show best positioned to become the “best version of police procedurals” (if such a thing could exist), based on the data from Color of Change’s “Normalizing Injustice” report, it’s S.W.A.T. “The Black Hand Man” felt like a window into the genre’s possibility and its limits… this time, through the eyes of Chris Alonso.

Though she’s the team lone female member, Chris hasn’t been getting the recognition she feels she deserves. She leads her team through a rescue simulation but when they emerge successful, having broken the course record, it’s her male colleagues that get the recognition. To prove herself, Chris has her eyes set on joining the Tactical Leadership Institute but Tan and Street — both less experienced than her — join the race and now she’s got competition from her own teammates. Chris is mystified, after all, they never expressed interest in TLI while she’d been talking about it for weeks, and approaches them about their decision to enter. Street volunteers to withdraw his name and, when she declines, he’s confused about what Chris really wants.

“We are not allowed to worry… not openly, anyway. Show the first sign of weakness as a woman here in SWAT and that’s it. We’re done in their minds,” Chris admits to Erika Rogers, the newest female member of SWAT. Chris confesses that things aren’t going well for her personally so she was overly invested in this professional triumph to compensate. Erika offers Chris the same advice that Chris gave her when she was trying to join SWAT: to push herself and know that she doesn’t need anyone else’s help to beat Street and Tan.

Compared to other procedurals, S.W.A.T.‘s the rare show that allows its female officer to win (I’m looking at you, NCIS: New Orleans). In fact, in this episode, it’s Chris that literally takes down the bad guy. But when it comes to Chris confronting misogyny this week and confronting homophobia in past episodes, I wonder if the show relies too much on subtly. Did the audience for “The Black Hand Man” walk away understanding why Chris was upset? Did the audience recognize how she was being overlooked, despite her otherwise collegial relationship with her teammates? I don’t think it was clear.

Sometimes, writers need to be explicit… and if S.W.A.T. can’t do it in confronting misogyny, I don’t have much hope that they’ll do it when confronting race. 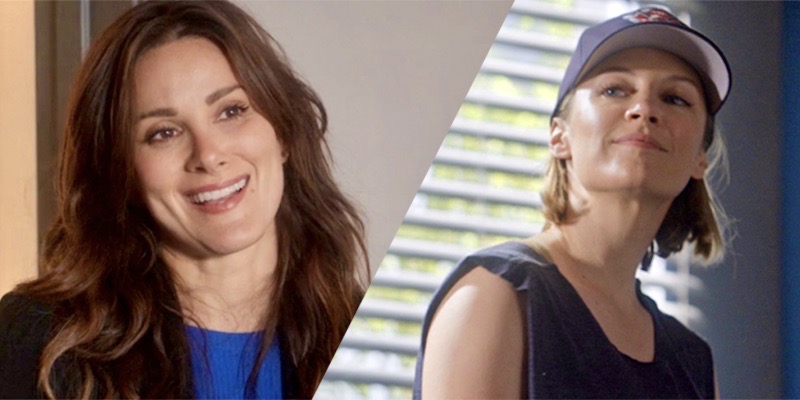 I have to keep making collages because they’ve been at least 6 feet apart for social distancing. That ends starting today!

Station 19 opens right near the top this week with Maya Bishop taking her top off. For her girlfriend, still working mid-shift at the hospital, via FaceTime. Maya? She’s also still mid-shift at the fire station and let me tell you — that little bit of red bra peeking out from beneath her uniform? It’s worth it.

Sadly, sneaky freaky FaceTime calls are starting to lose their appeal. But Maya knows that she messed up with the cheating last season; she doesn’t want to move to fast and risk ruining Carina’s fragile trust. Not that it matters much anyway, Carina doesn’t want to quarantine with Maya as long as Dr. Bailey and Ben are also quarantining apart, because it feels like going against her own boss.

Let me tell you what — Big Pops Ben Warren (who has started to go grey in the off-season? Really leaning into his “dad” nickname around the fire house) tells Carina to snap out of it. He would give anything to be with Bailey right now. If she has someone she loves to help her through this pandemic, then that’s exactly where we should be. Alright, alright, fine – someone order Pops a PFLAG shirt!

At the end of Maya’s next shift, Carina is waiting for her at the station. First of all, the way that Maya’s eyes pop out of her head? And then how she kinda lightly licks her lips, sighs deep, and has to back away to physically restrain herself from breaking quarantine protocols?? There’s nothing on network TV right now like the chemistry sparking between Danielle Savre and Stefania Spampinato, and I know I keep saying it — but that’s only because it is absolutely true.

“Move in with me. Quarantine is basically just moving in together. But I don’t want to
‘Basically’ do anything with you. I want to do everything… for real.”

Carina smiles bright enough to light a galaxy, that’s all she wanted to hear. She pulls out two COVID tests that she took (ahem, probably stole if we’re being honest) from the hospital, “I’ll do yours if you’ll do mine.”

And by then, Maya can only laugh. How is it that she’s so lucky that her girlfriend even makes nasal swabbing sound sexy? The benefits of dating Dr. Orgasm, I suppose.

PS: Andy has a gay cousin with seemingly tolerant but also possibly homophobic parents. Super excited for a queer Latina and also our third queer woman on the <em>Station 19</em> scorecard.  Plus there’s always hot gay Travis, so we’re really starting to rank up those Shondaland numbers!