AAAAAAAAND WE’RE BACK!! This is the longest hiatus that our weekly television roundup Boobs on Your Tube has ever been on, almost six months!, and we’ve missed you so much! But as the sun once again rises and sets, Grey’s Anatomy is back on our screens (at this point we think it will outlive us all). The return of the Shondaland stalwart has often been the “unofficial kickoff” to our fall television coverage in this column, so we decided to come back and give it whirl! Our coverage might be more sporadic as the network tv schedule slowly fills up, but we will see how it goes.

Our TV/Film coverage just keeps chugging along: Riese and Carly are almost done wrapping up season 5 of the OG L Word on To L and Back — and they are celebrating with not one, but two group gatherings that are just packed with dyke drama. Kamala really dug the queer fluidity and intimate friendships of We Are Who We Are. Riese tracked down every single movie with lesbian or bisexual characters that you can stream on HBO Max. We’re also still digging through our “Lost Movie Archives” and this week Drew pulled out Heavenly Creatures — which, let’s be real, she thinks is a queer adolescent nightmare. Drew also watched Ammonite and while this easily one of the funniest and most blunt reviews Drew has ever written, the movie is really NOT great! Which reminded Heather… she mistakenly watched the wrong lesbian dinosaur movie (click it, you will laugh).

Speaking of Heather, she had the amazing opportunity to visit the set of Kristen Stewart and Clea DuVall’s Happiest Season and her write up about has positively gone viral for all the best reasons! And while we are talking about Happiest Season, did you miss the trailer? Well, we have you covered!

+ Like every other police procedural on television, S.W.A.T. did its obligatory “Black Lives Matter” episode to start the season. While there wasn’t much material for bisexual badass Chris Alonso, expect more as the season ramps up. In an interview with TV Line, executive producer Aaron Rahsaan promises “an emotional kind of whirlwind that’s going to test her in a way that she hasn’t been tested before.” — Natalie

+ There was MUCH screaming in the Autostraddle slack over this news, and I am ecstatic to be the one that shares it publicly: Chantal Thuy (Grace Choi)  has been upped to a series regular on Black Lightning ahead of Season 4. What’s that sound I hear? IS IT THE SOUND OF THUNDER GRACE RISING ONCE AGAIN!?!? I’ve already promised some of the Autostraddle TV Team a little Batwoman/Thunder Grace fan fiction! Will they hold me to it? — Carmen

An Update: Chantal is excited, too! 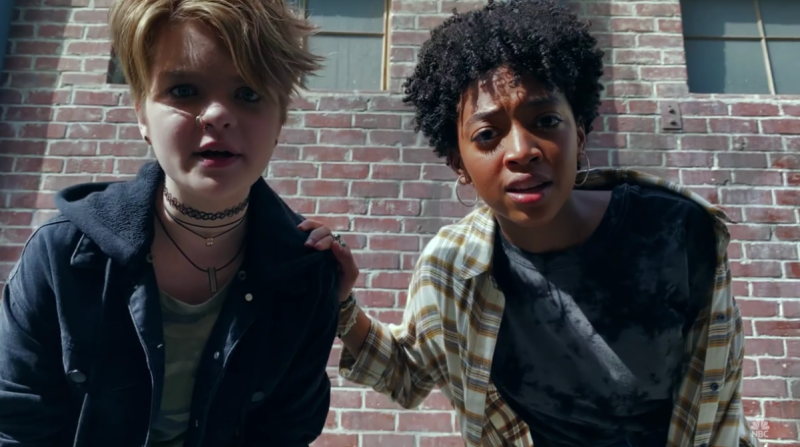 Remember America’s coolest gay tween Tess Pearson? Who’s previous greatest hits include making me cry in a coming out speech heard ’round the world and then cutting off all her hair before the start of seventh grade? Well, our cool tween has turned into a angsty, social justice warrior of a teenager and let me tell you — mama couldn’t be more proud! (I’m “mama” in this scenario.)

Tess is in full teenage melodrama when she won’t eat the homemade pancakes Beth made her daughters because they weren’t made with cage free eggs (OK! Admittedly that’s not a good look, Tess). But the real trouble comes later in the school day, when a video that Tess made with her friend Alex earlier in the year is leaked and goes viral online. In the video Tess and Alex dance to a song I don’t know because I’m not a cool teenager, and the camera pans to their color coordinated Doc Martens, flannel, motorcycle-style jackets and rolled up jeans — just so you can know both these kids are queer right from the jump. Alex admonishes a teacher who keeps misgendering them as “she” and Tess follows up by telling another teacher to stop touching Black students’ hair. They say “screw you” to authority and raise their middle fingers. And while I enjoy a good old fashioned teenage “f*ck you!” to the system, it’s fair to say that Tess’ parents expectedly feel differently. 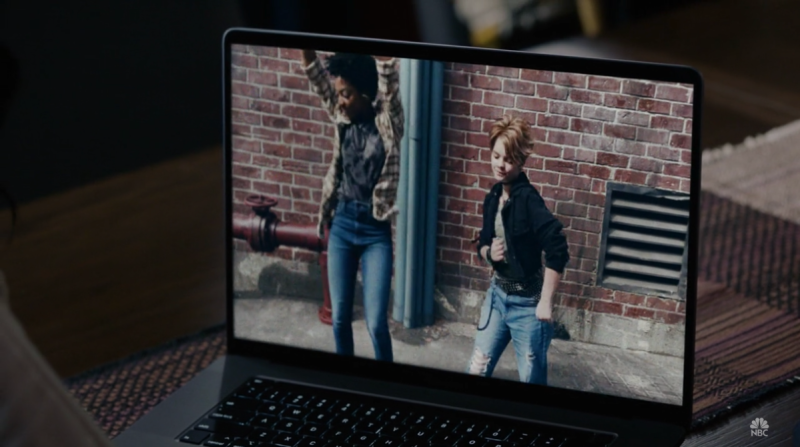 Tess even referenced Solange as an inspiration! MY BABYYYY!!

Beth and Randall sit their daughter down and tell her that this behavior is not acceptable. But Tess counters that she’s no longer the “prissy quiet little girl” from the “straight, white suburbs” who won’t speak up anymore. When she sees injustice, she is standing up for what’s right because “Silence in the face of injustice is complicity with the oppressor.” (Shout out to Ginetta Sagan! A reference that I didn’t catch, but Randall did).

I’m sorry, I really am, but it’s so hard for me to look at Tess, in her boots and her thirty chunky gay bracelets, and her flannel, and think back to the anxious little girl who came out in a mess of panicked tears just two short years ago, and not just have my heart burst with pride at the confident young woman she’s becoming. Once Tess is sent stomping to her room, Randall quietly admits to Beth that he feels similarly — he was young and something bothered him, he would bury it. Tess has inherited her father’s high anxiety, but she is speaking up for what she believes in. Still, there is a time and place for such behavior, so they take away her phone and ground her for six weeks to make sure she gets the lesson. (Tess calls them both “fascists” for good measure, so the kids will in fact be alright!) 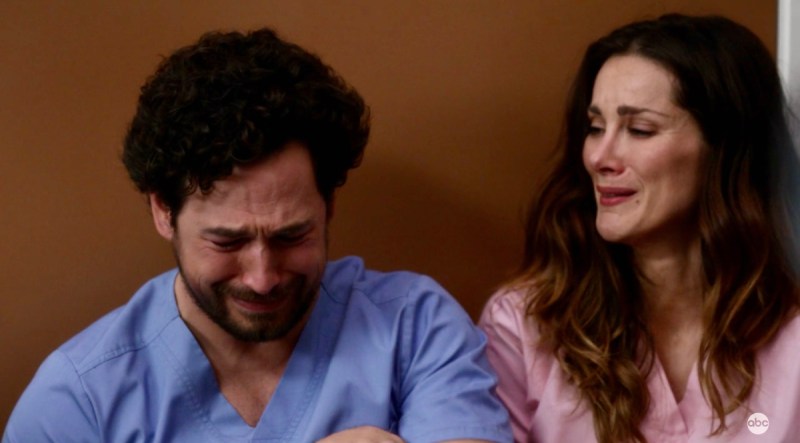 I mean, when they announced that Grey’s Anatomy was doing a COVID episode, we all knew we’d end up on the floor crying, right?

I’ll be honest when we originally decided on Monday that this week was the week to finally bring back “Boobs On Your Tube” after nearly six months away, we did it because we assumed that certainly something gay and hopefully romantic would happen in Shondaland.

I mean sure, the heavily promoted Station 19 / Grey’s Anatomy crossover premiere was always going to be centered around how COVID-19 has effected hospital staff and first responders, which definitely doesn’t spell hearts and rainbows… but a crossover also certainly meant that Captain Bisexual (errr, Maya Bishop) and Doctor Orgasm (err, Carina Deluca) would be sharing screen time, at the very least? Especially with the news over the break that Stefania Spampinato (that’s Dr. Orgasm to you) would be joining her girlfriend at Station 19 full-time! It felt as close to “sure thing” as possible that we would have something, anything, to tell you today.

Well, the gods of Shondaland had other plans — because Carina and Maya spend exactly 15 seconds on camera together, if you can even call it that, right in the first minute of last night’s three hour affair. The crew of Station 19 has taken to cheering for the staff of Grey Sloan Memorial at the beginning and ends of their shift change, a play on the 7pm cheers for healthcare workers that became tradition in major cities across the nation during lockdown last spring. In that cheer session, we do see Maya make eyes at Carina and Carina smile beneath her mask and shield, but that’s about as far as we get. 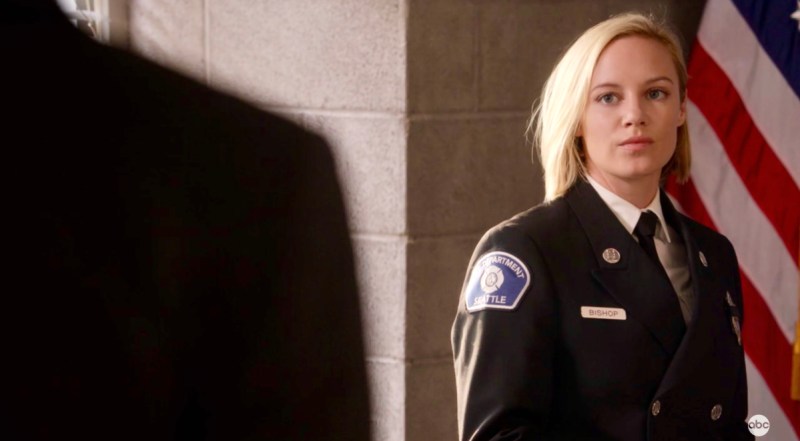 In her Station 19 hour, Maya has even less to do from there! She does get to have a pretty great stand off towards the end with Boris Kodjoe (sorry, I never learned his character’s name) that show’s off that her homemade angst-driven haircut from last season is now a very hot official bisexual bob. Very fitting of Captain Bisexual, if I do say so myself.

In her Grey’s hour (the first of a two-hour special), Carina attends to her baby brother’s continuing mental health concerns, stemming from the end of last year. Baby Brother DeLuca is bipolar, like their father, and he’s having a hard time coping with that reality. Though there’s nothing gay there, I have to say: Last night was by many miles easily the best work Stefania Spampinato has ever done! And it’s hard to watch, it’s a full on weeper, but damn. It’s so good. I won’t even crack a snarky joke — you should just see it for yourself. If that’s the kind of power that Stefania is going to bring onto Station 19 this year, I absolutely cannot wait.

ABC Studios shares this excitement with me and has taken to having the actresses sell their social media this year. Check out this clip and tell me that you aren’t sold on this love story?? IMPOSSIBLE I TELL YA!

Obsessed with Marina sharing their favorite Season 3 scenes 😍 while we get ready for our watch party! What are your favorite scenes? @D_SAVRE @spampistefania pic.twitter.com/A8hCorKFj2

I can’t tell you what else happened in the three hour event, because honestly I was curled into a ball and loudly weeping tears into my blanket. You know how Shondaland goes. But, I will say there was a very, ahem, Dreamy comeback last night. It’s not gay so I won’t report it here, but.. If you saw it, then you know. And though I never liked this person in question, I will admit that I full on, high-pitched, screamed at the sight.

It’s hard to still surprise like that after 17 freaking years on air. Well done.