The following review includes heavy spoilers for HBO’s We Are Who We Are.

In the first scene of We Are Who We Are, we witness this: Fraser (Jack Dylan Grazer), a white, bleach-blond teen in an orange hoodie and massive, fuzzy cheetah print shorts, is listening to earbuds and fidgeting impatiently at an airport in Italy, while his moms, Sarah (Chloë Sevigny) and Maggie (Alice Braga), talk to someone about his lost suitcase. Suddenly, when all patience evades him and he simply can’t take it anymore, Fraser makes a scene, demanding to be given the tiny airline alcohol bottle that he saw his mom Sarah put in her bag, and sucks it dry. 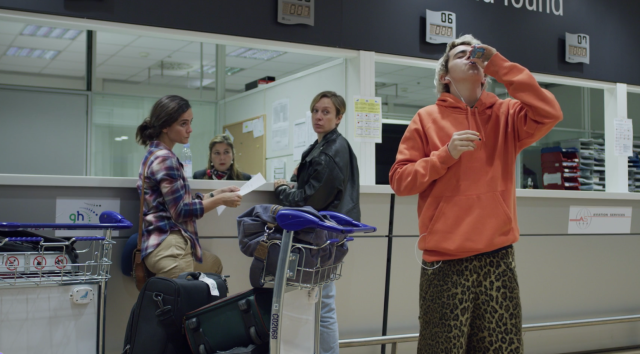 I expected my reaction to be a bunch of deep eye rolls, but instead I found myself going, “Oh this is a weird, fucked up dynamic and I’m gonna need to see more of this!”

Some of this reaction is about the rich, intentional texture of the show’s production. It’s an HBO series directed by Luca Guadagnino, of Call Me By Your Name and Suspiria, and is scored dramatically by Dev Hines of Blood Orange. As such, it begins with a strange, dark, meandering promise that really lured me in. More than anything in the world, I love to be completely wrapped up in characters and relationships that allow me to experience intimate moments — especially among queer teens, especially ones that mark a path of transformation. On that front, We Are Who We Are is a little treasure trove. To have those moments set on an American military base in Chioggia, Italy, led by Sevingy’s manipulative, lesbian base commander, in juuuuust pre-Trump 2016, felt like a new way to look at things.

There are adults in this show. There are full-grown queer adult women, who flirt at the side of canal while fingering a pie together, who have hot gay sex — in uniform, if that is your thing — and I wasn’t not amused by all of this. But the show never actually does anything with these women’s storylines. What We Are Who We Are does most gracefully is to dunk you into the intense connection and limitless freedom the young people in this show seek together. This group of high schoolers is always running off base to hang out on the beach, they use training equipment to zipline down from a building in the middle of the night, they go paintballing and get hosed down by the owner for being too raucous.

In my favorite episode, the night before Craig, the too-good-to-believe nice guy of the group, gets shipped off to Afghanistan, he decides to marry his Italian girlfriend. To celebrate, the group breaks into an empty, luxurious Russian home for a wild, marathon party, and I savored each act. The genuine exuberant energy of jumping into a pool with clothes on calms into everyone eating with their hands from a pot of spaghetti. It jumps back up to drunk, drug-fueled dancing before melting into the kind of soft sex stepped in grief from saying goodbye. Despite living on a base where everything is highly controlled and regulated, we’re following a group of messy young people, who want to explore and push limits, who have not bought into their parents’ values and don’t know yet what matters most to them. There are small revelations around every corner. Maybe it’s that my own queer youth was defined by this kind of restlessness, that I find it so beautiful to watch.

Without a doubt, the best part of We Are Who We Are is the relationship between Fraser — the wild and pretentious, attention-seeking son of the Base Commander — and Harper (Jordan Kristine Seamón, who we first meet as Caitlin) — the tough, reserved and thoughtful Black kid, who finds his impending womanhood kinda doomful. The friendship begins when, while stalking Harper, Fraser notices him at a cafe, dressed in his dad’s clothes, introducing himself as Harper and giving his number to a girl. Fraser is the first person to call Harper Harper and validate his identity. After Fraser introduces Harper to the trans-masculine internet, which blows his mind, they get deep fast and don’t look back.

I’ll say that even as I’m writing this, to use any one pronoun or name for Harper feels presumptuous and inaccurate. I came away understanding that Harper had a range of gender feelings that were still new and exploratory — which could also be a reason why, a cis woman was cast to play this part. So much of what I enjoyed about these characters is predicated on them not needing to commit to a single way of being. There is a question throughout the season, posed over and over by their friends and family, of what the deep connection between Fraser and Harper is about. Are they dating, are they in love, are they having sex, are they best friends, what is it and why? It’s one of the greatest queerest pleasures that Harper and Fraser are sure about each other, but not interested in definition. They don’t care what people think they are. They don’t mind not having answers. 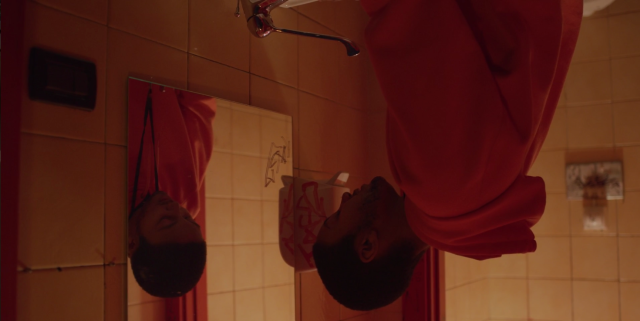 In part, they’re kids who don’t know yet exactly what they want, but they also seem comfortable without the exact words to define their identities. People sense who they are anyway. At some point Harper’s dad asks him if Fraser is gay, to which he gets no response. In the last episode, Harper does meet a hot bartending dyke who invites him back stage and they make out, but when this person asks if he’s trans, FTM, Harper gets up, the camera flips upside down he and goes to the bathroom to remove his facial hair. I think one interpretation of this action is an expression of shame or discomfort, but I think it’s equally the recognition that “FTM” felt like something different than his own, more fluid gender identity. So in the finale of the show, when he and Fraser do finally kiss, while I can sense that Harper does seem interested (as opposed to the four other times he has kissed people and looks not even a little bit moved), even in that moment, I was not 100% sure it was a sexual kiss. It was certainly romantic, there was a lot of love, but I don’t know what this kiss is, and I don’t know if they did either. 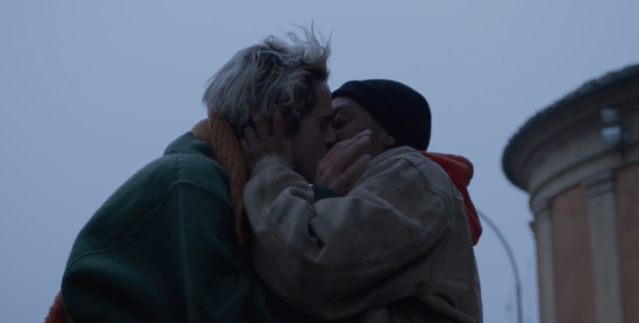 Honestly, I preferred not to wonder whether Fraser and Harper were or weren’t getting together. Instead I got to watch them grow ever closer and surer of themselves, showing vulnerability to each other, balancing their opposite personalities. This portrait of deep friendship is one of the most honest and thrilling I’ve seen in a while. Fraser starts dressing Harper in his clothes. He helps him put on a good-looking mustache and shave his head, to get his masc self together, before Harper goes to meet the girl whose number he’d gotten at the cafe. As someone whose precise expression of gender and sexuality was honed through close friendships with people who shared unexpected pieces of my own, I appreciated this picture of two people blossoming when they’re finally seen as the people they hope to become. Fraser gets someone with whom to share his obsessions and Harper gets someone who helps him express himself. We see the care they have for each other, whether it’s named really doesn’t matter to me.

Those are the best parts. Before I call this show worthy of our precious queer, quarantine time, I must point out that it has an array of problems. I am the pretentious, art snob this show was made for, but I can’t tell you what it’s attempting to say. I have a million complaints about the number of truly scintillating topics the show opens up and then just leaves there, untouched, uncared for, essentially wasted.

I once had a housemate who went to the very expensive grocery story by our apartment, left the groceries on the counter and came downstairs the next morning to tell me I probably should put my food away because it was going bad. That’s the kind of care given to some ideas that are prominent and provocative enough to demand my attention, but never came into the story. Just a few examples include: the violent and intimate relationship between Fraser and his mom, Sarah; the racial tension between the Fraser and Harper’s families; the multiple kinds of Black experiences within Harper’s family and the shades of violence there; the culture of gayness within this highly regulated military culture; the exploration of gender and sexuality within a Black identity. And those are just a few, there are many more! It doesn’t even get into the questions I have about why the people who made this show felt comfortable telling it, or my issue with the several gratuitous Blood Orange worshipping scenes — and I am a Dev Hines fan!

So, I will leave you to tell me whether you’re in or out. I don’t like when characters I’m attached to (like Jonathan, Jenny, Maggie and Danny) don’t get poetic endings. I consider it irresponsible when people make otherwise thoughtful art that uses identity and power dynamics as a setting, instead of folding them into the narrative. But I love the stories about friendship and intimacy. I’m seduced by the softness and warmth of the production. I enjoy the way I’m asked not just to listen or judge, but to observe. And I revel in deep ambiguity. So I guess it’s fine it doesn’t make a lot of sense, it’s 2020, I’ll take it.