In February, I found myself sitting in a folding chair in a country club just outside of Pittsburgh, directly across from Kristen Stewart and Mackenzie Davis. They were dressed for Christmas. The country club was dressed for Christmas. I was wearing headphones plugged into a little microphone pack that allowed me to hear everything Clea DuVall and the actors said when the cameras started rolling. Two days earlier, the Happiest Season PR team had emailed me out of the blue and asked if I’d like to visit the set of the upcoming queer holiday romantic comedy before they wrapped. I thought, “Finally, someone has seen my artistic masterpieces promoting this film!” (They had not.)

And so I put my two nicest shirts in a suitcase and hopped on a plane and next thing I knew, Clea DuVall herself was shaking my hand and thanking me for dropping by. Her handshake was just the right amount of firm, and her hands were slightly calloused, like a carpenter’s. I made a note to tell you that specifically. “Like a carpenter’s.”

I actually made a lot of notes, but it turns out I don’t need them: The thing about being sandwiched in a corner with Kristen Stewart is you don’t really forget it. 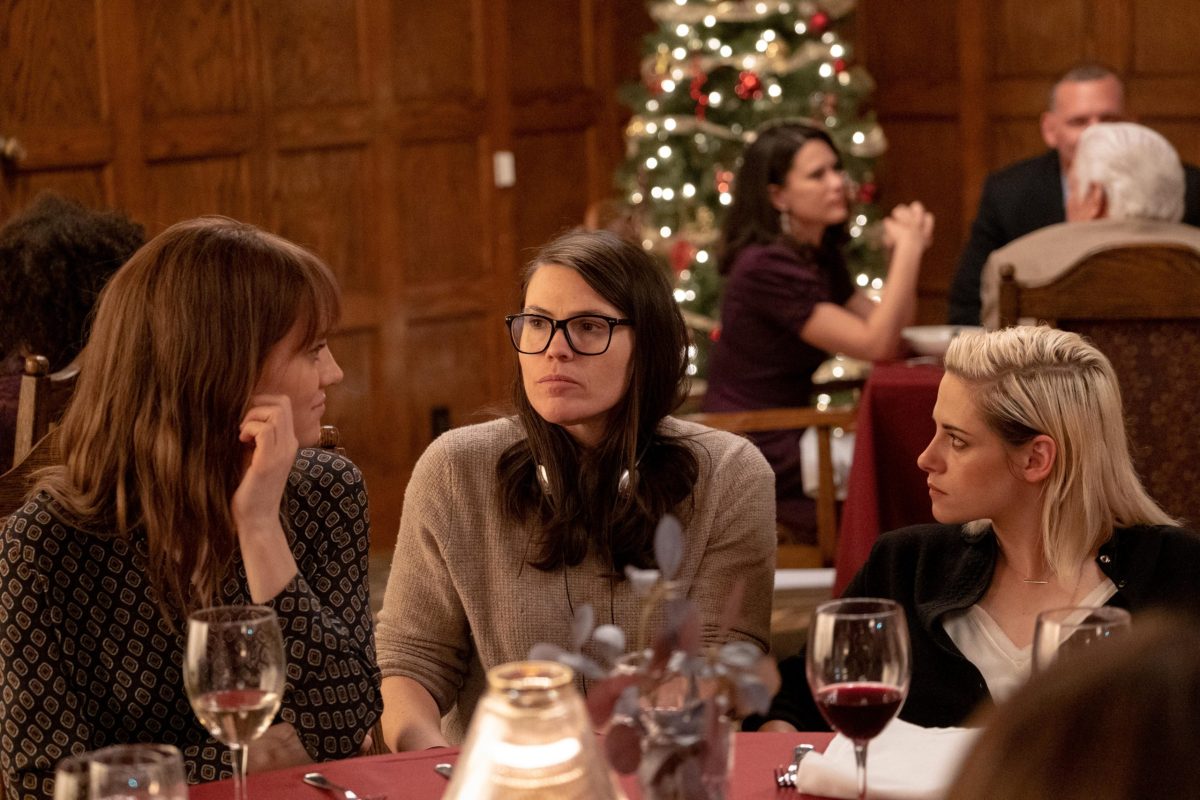 The story of Happiest Season is the story of Clea DuVall: Harper, played by Mackenzie Davis, is in a loving, committed, healthy, happy longterm relationship with her girlfriend, Abby, played by Kristen Stewart — but Harper hasn’t yet come out to her parents, which Abby doesn’t know. Harper doesn’t reveal this small snafoozle to Abby until they’re in the car on the way to spend Christmas with Harper’s family. Clea wanted to write the movie because she’d lived it, and she wanted it to be a Christmas rom-com because where are the queer Christmas rom-coms, and also because she wanted it to be timeless in the way only holiday films ever really are. So she called up comedic writer and actress Mary Holland, who plays Harper’s sister Jane in the film, and they wrote it and pitched it to Marty Bowen and Isaac Klausner, who’d produced the gay rom-com Love, Simon to great acclaim, and they snapped it right up.

Kristen Stewart signed on because Clea’s story, Harper’s story, is her story too. A young gay woman perfectly content with who she is, in a loving relationship, just not yet ready to talk about it to other people who might not be as supportive as she needs them to be. Only in the case of Kristen Stewart, I suppose, Harper’s loving parents, played by Mary Steenburgen and Victor Garber, were the seventy gazillion readers of the gossip blogs that hire the paparazzi that dog her every step. Kristen Stewart said she didn’t just want to play Abby, but that she’d have been jealous if anyone else got to play her. She said, with genuine excitement, “A movie like this has never existed!”

These are the other things I don’t need notes to recall: Kristen Stewart listened with her whole face, to whoever was talking, and talked with her whole body, and the experience was like being ensconced in some kind of supernatural energy-exchange. I had to shake my head like a cartoon character with bumblebees in my ears to clear my brain when the handler came to take her and Mackenzie Davis back to filming. She was generous with her laughter, and her eyes brightened expectantly when it was clear you were going to make a joke, like she wanted you to say something funny for her and for you too. She was relaxed, on that set where Clea DuVall was in charge and the script was queer and she was playing a lesbian and Mackenzie Davis smiled like twinkle lights and Aubrey Plaza was so effortlessly hilarious. And she was happy. Really happy. That’s what she told the little clump of reporters gathered around her, but she didn’t even really need to say it. She was radiating it. 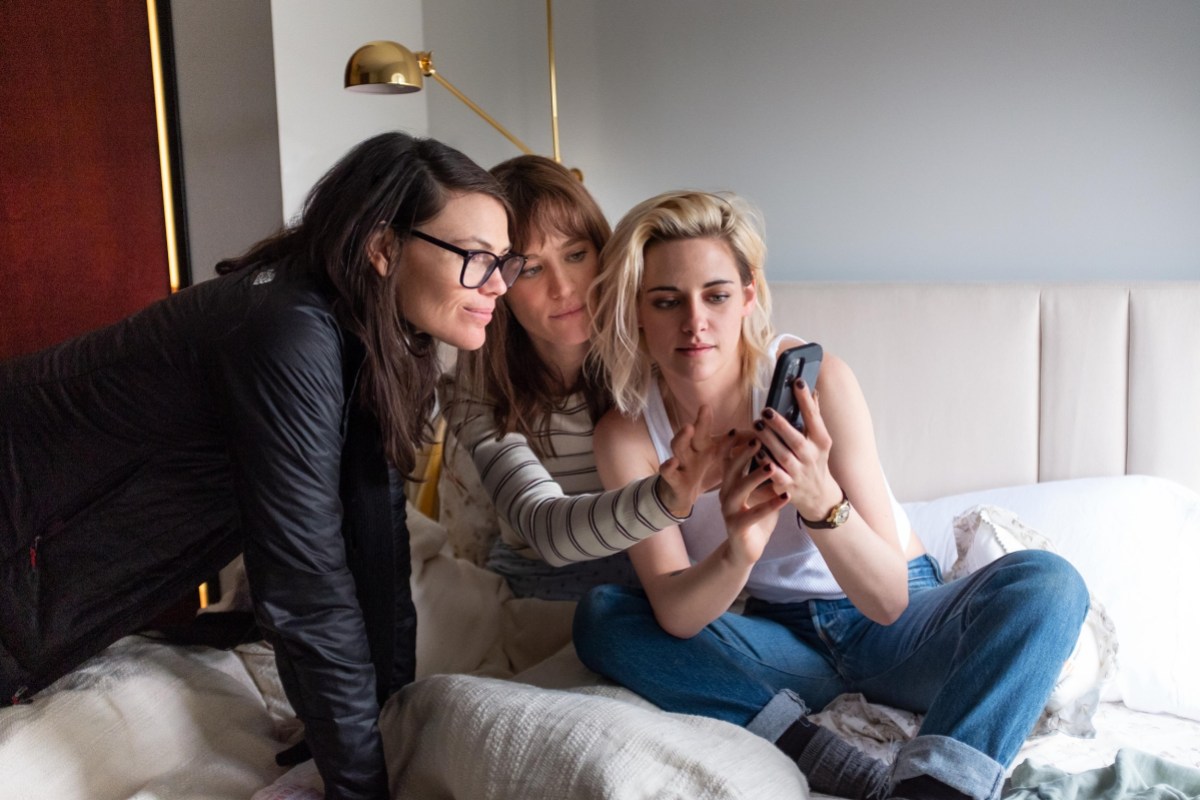 That was true of every single person I spoke with, actually. Victor Garber was delighted by how calm and generous and collaborative everything was on Clea DuVall’s set. Mary Steenburgen, who believes this film will be an all-time Christmas classic, was thrilled to realize that every gay person for the rest of forever will be watching her at least twice a year at the holidays, now — once with Elf and once with Happiest Season. (She was also delighted by Dan Levy, just in general, and said she was considering adopting him, since her own son keeps posting photos of Andie MacDowell on his social media and pretending he thinks it’s his mom.) Mary Holland said the set felt like actual Christmas. Costume designer Kathleen Felix-Hager side-eyed me when I asked her if it was hard to find enough distinct flannels to fit multiple lesbian characters in the same Christmas movie, but then relaxed and laughed when I told her I’m a lesbian and it was a joke (but also my wife and I do actually have this problem with both flannels and beanies, so it’s not really a joke).

When Kristen Stewart said that a movie like Happiest Season doesn’t exist yet, her eyes, which had been giving equal attention to everyone with a recorder out, landed on me and Sam Manzella, a writer for NewNowNext, and stayed there. We were certainly the gayest-looking people in that tiny gaggle of journalists, and we were the ones writing for gay publications. I smiled and I nodded that Kristen Stewart was correct, and Sam smiled and nodded too, and Kristen Stewart half-smiled back at us — you know the smile I’m talking about — and continued what she was saying, moving her steady gaze over our little group.

The funny thing about Kristen Stewart saying a movie like Happiest Season doesn’t yet exist is that of course a movie like Happiest Season doesn’t exist yet, because without Kristen Stewart it couldn’t exist. Her presence is the thing that makes it the thing it is. Kristen Stewart, the Charlie’s Angel. Kristen Stewart, the star of the 3.3 billion dollar Twilight series. Kristen Stewart, stated enemy of Donald Trump who went onto Saturday Night Live and said, “I’m like so gay, dude” to the President of the United States. Kristen Stewart, who has her own Awards and Nominations page on Wikipedia, who is the muse of countless directors and designers, who cannot take a single step in Los Angeles without being assailed by paparazzi, who has been profiled repeatedly by every newspaper and magazine, and whose every public word becomes an SEO clickbait headline (yes, even here). She has one of the most — if not the most — famous gay millennial faces on the planet earth.

In the totality of the lesbian film canon, there are very few movies with actresses as famous or lauded as Kristen Stewart. And there are even fewer movies with out actresses as famous as Kristen Stewart that are also written and directed by queer women. And gay Christmas rom-coms, with warm and well-worn plots that feel like your favorite flannel pajamas? That’s never happened because most gay movies are made by straight people who cannot imagine our stories as anything other than miserable. (And actors who sign on for well-made tragedy for Oscar’s sake.) Toss in Tegan and Sara headlining the soundtrack, and you can drill down all the way and this thing is nothing but gay. 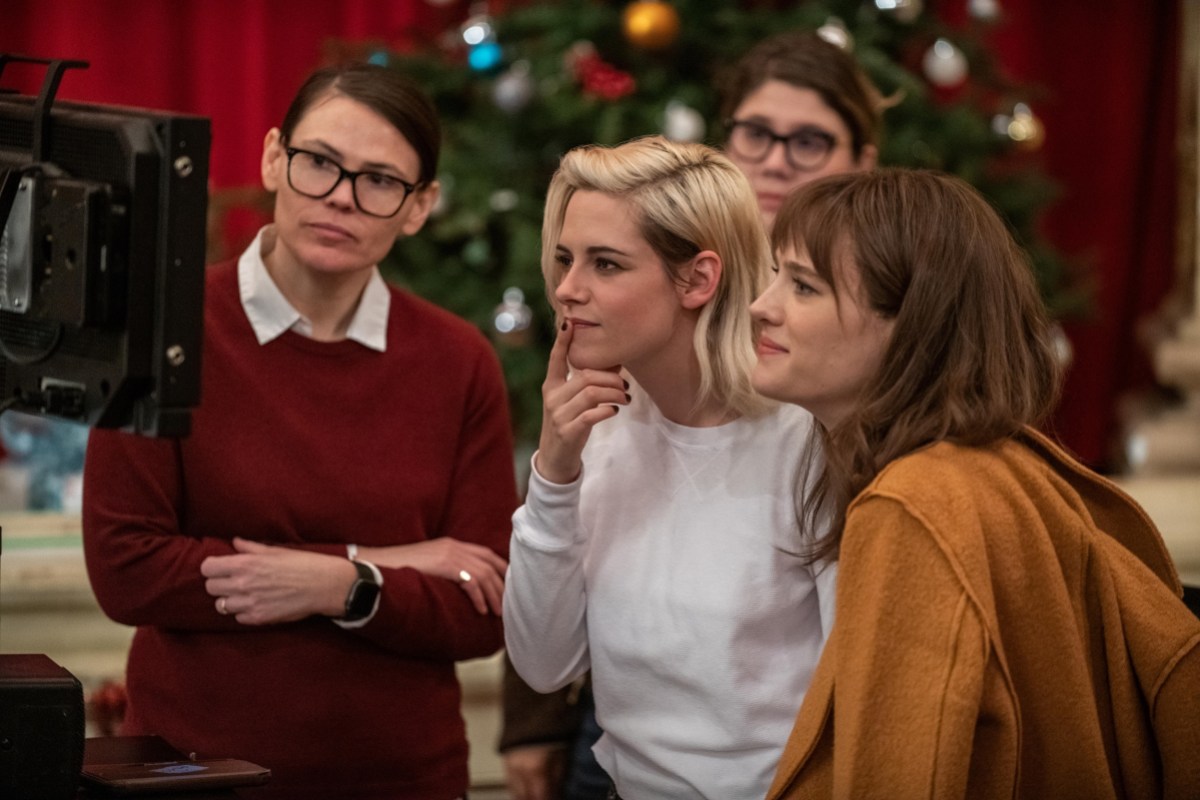 And while Clea DuVall was quick to point out — and Kristen Stewart was quick to echo — that this story is her story, and that she’s so proud that it’s breaking down one door, she knows there are still so many more queer movies that need to be made by other queer writers and directors and actors who haven’t yet seen themselves on-screen.

Five years ago, Happiest Season would have been the apex of queer cinema — and now it’s a celebratory pause along a continuum. It’s all I want this Christmas! But I also want Janelle Monáe’s gay rom-com following that classic enemies to lovers Pride and Prejudice plot. I want Janet Mock’s New York City gay career woman comedy. Give me Indya Moore as a Disney Princess. Give me Sara Ramirez as an action star. And where’s Alice Wu’s blockbuster money, and where’s the studios wooing Desiree Akhvahn, and who’s adapting N.K. Jemisin’s three-time Hugo-winning fantasy series for the big screen?

Clea DuVall really seemed to understand that her new film both stands alone, and is also part of a much larger and essential cultural conversation.

I laughed a lot on the set of Happiest Season, because that kind of joy is contagious, because the script is very funny, because Kristen Stewart knocked a painting off a wall between scenes at one point and tried to play it cool but of course there’s a person on set whose entire job is to make sure nothing in-frame changes between takes so he had to come fix it. I also laughed because when I started watching lesbian movies, I did it in hiding, and they were all terrible and tragic. And because when I started writing about gay TV and film, I couldn’t get a single actress who played a gay character to talk to me because they didn’t want to do interviews with a gay publication and get pigeonholed or typecast (and they definitely didn’t want anyone to think they were gay). And here I was on the set of Clea Duval’s latest film, surrounded by wreaths and fir trees and golden fairy lights, and Kristen Stewart was holding my gaze, and she was saying, “I fucking belong in this movie.”

For all the hand-wringing that journalists who profile Kristen Stewart do about whether or not she even wants to be talking to them, and what it means that she ordered this to eat or drink, and was wearing that, and glanced at her phone, or stared out the window pensively for more than five seconds, or the way she tilted her head, or the tenor of her voice, or whatever perpetual judgment that she’s not walking around smiling every second of her life like a circus clown, the vibe I got from her on that rainy, foggy, bitingly cold day in Pittsburgh was that there was nowhere else she’d rather be.