When news of Ammoninite washed ashore on the great sea of the internet, I was elated. Two of the things I love most in life are lesbians and dinosaurs, and Ammonite promised both of those things! That the lesbians were to be played by Oscar/Emmy/Grammy-winner Kate Winslet and Saoirse Lady Bird Ronan was fine and good. I especially loved Ronan as lesbian icon Jo March in Little Women. But mostly, I must confess, I was in it for those giant and fantastic reptilian critters of yore. Well, and then the reviews came in, and they were Not Good. Our own Drew Gregory, who loves to love things and does not love to not love things, said Ammonite was drab! And dull! And dour! But I could not pass up the chance to watch a movie about lesbian dinosaurs, so I said to the Amazon Echo, my own personal pre-extinction device, “Alexa, please play the lesbian dinosaurs movie!” 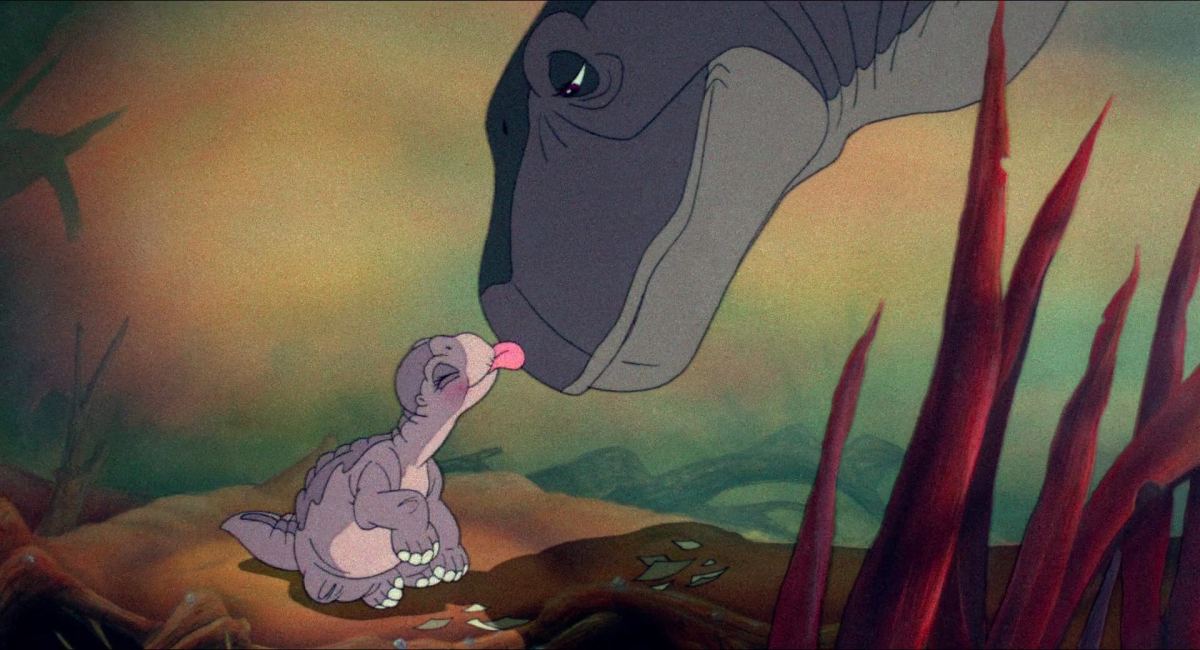 The reason you know the lesbian dinosaur movie is a lesbian movie is because it starts out with a tragedy! Innocent Littlefoot, who is a Longneck dinosaur, becomes friends with chatty Cera, a Three-Horn dinosaur, even though their parents discourage it because they’re different species. Then one night when they’re out playing, a Sharptooth attacks them! And Littlefoot’s mom, who is voiced by Helen Shaver, who plays Vivian in the iconic lesbian movie Desert Hearts, gets eaten by the Sharptooth! But this is a lesbian movie and so that’s just the beginning of the misery. Next thing you know, there’s an earthquake and Littlefoot and Cera get separated from their whole entire families and the planet is changing temperatures and there’s hardly any food left and their only hope is to get to the Great Valley, a land flowing with tree stars.

Littlefoot and Cera set off on a journey to the Great Valley, and soon encounter a Bigmouth dinosaur named Ducky and a Flyer dinosaur named Petrie and a Spiketail dinosaur named Spike who join up with them. Everyone is very happy to have friends because they are hungry and cold, but Cera can’t shake the prejudices of her family, so she decides she’s going to find “her own kind” — but gives up on that real quick when it gets dark and scary and frigid at night. 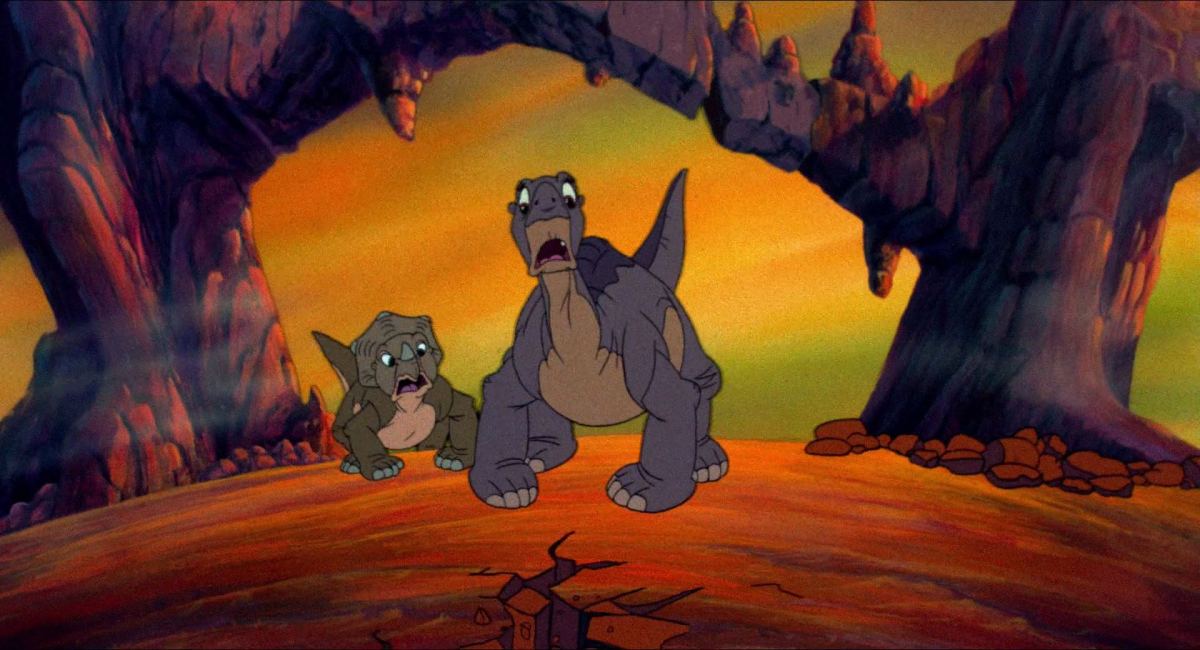 But that’s only the beginning of the tension between Littlefoot and Cera. See, Littlefoot, in true queer fashion, has a lot of mommy issues. (This, of course, is a common theme in other popular lesbian movies such as Carol and Frozen 2.) First of all, he hears his mom’s voice guiding him toward rock formations and fire mountains and also sees her in the clouds. Like physically, he sees her body in the form of a cloud leading him places. And second of all, he is in constant turmoil because his mom was kind of a bigot but also any time anyone says anything slightly rude about her, he tries to murder them! Which is how the gang ends up following Cera instead of him.

It’s hard to know who is the lesbian-est of these lesbian dinosaurs. I have mentioned Littlefoot’s mommy issues and Cera’s entire Scorpio deal — “I can get my OWN green food! You see, I can take care of myself; all by myself. I’m not afraid to be alone, I know my way to go, AND… I’m not afraid of the Sharptooth, AND… I hope that he doesn’t eat any of you!” — but there’s some other lesbian traits amongst them. Ducky has serious people-pleaser boundary stuff, just “Yep! Yep! Yep!” to everything. Petrie has imposter syndrome and spends the whole movie feeling insecure about not flying yet. And, to be honest, they’re all going through a big time existential crisis and even the simplest conversations are framed against the backdrop of their own mortality and the ephemeral nature of existence. 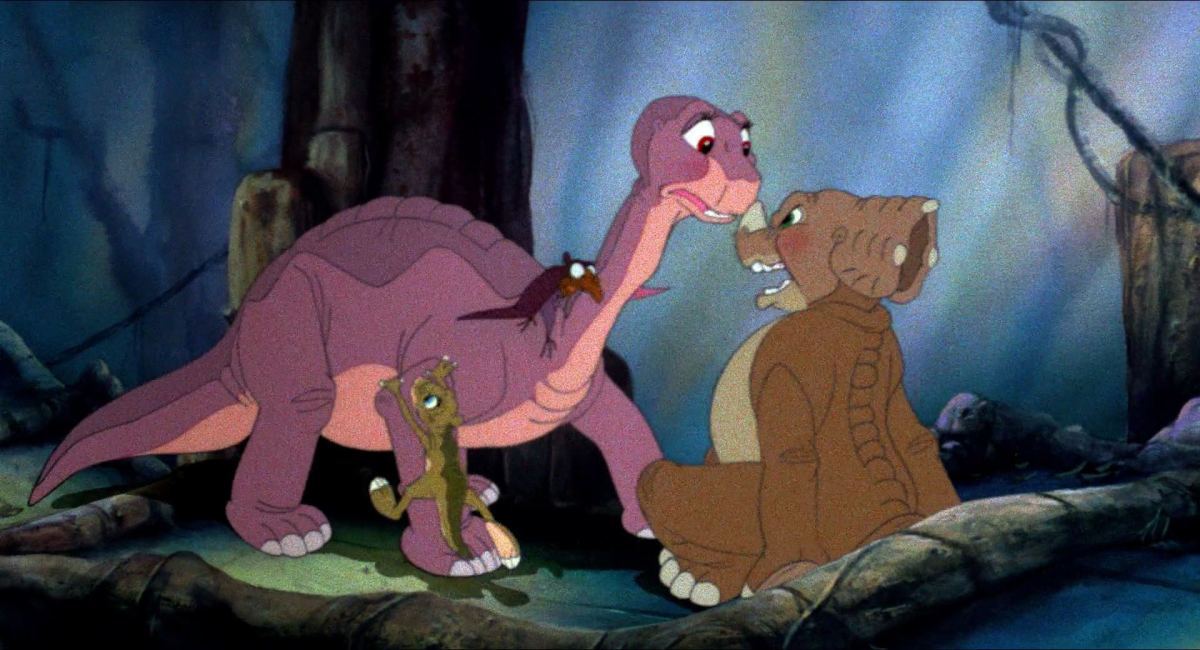 In the end, though, this little found family comes together and discovers their own powers because of each other and also because of adversity. Cera does a superheroic headbutt! Petrie learns to fly on the snuffy breath of a Sharptooth! Littlefoot uses his tenacity and ingenuity to save the day! And, together, they make it to the Great Valley!

It was when they made it to the Great Valley and neither Kate Winslet nor Saoirse Lady Bird Ronan had shown up that I realized Alexa had played the wrong lesbian dinosaur movie. But I’m glad I watched it anyway. It’s a lot of pain and also angst about the fact of impermanence of all living things, but also resilience and hard-won hope like that Mary Oliver poem “Don’t Hesitate”:

If you suddenly and unexpectedly feel joy, don’t hesitate. Give in to it. There are plenty of lives and whole towns destroyed or about to be. We are not wise, and not very often kind. And much can never be redeemed. Still, life has some possibility left. Perhaps this is its way of fighting back, that sometimes something happens better than all the riches or power in the world. It could be anything, but very likely you notice it in the instant when love begins. Anyway, that’s often the case. Anyway, whatever it is, don’t be afraid of its plenty. Joy is not made to be a crumb.

And by “crumb,” of course I mean “a single tree star.” 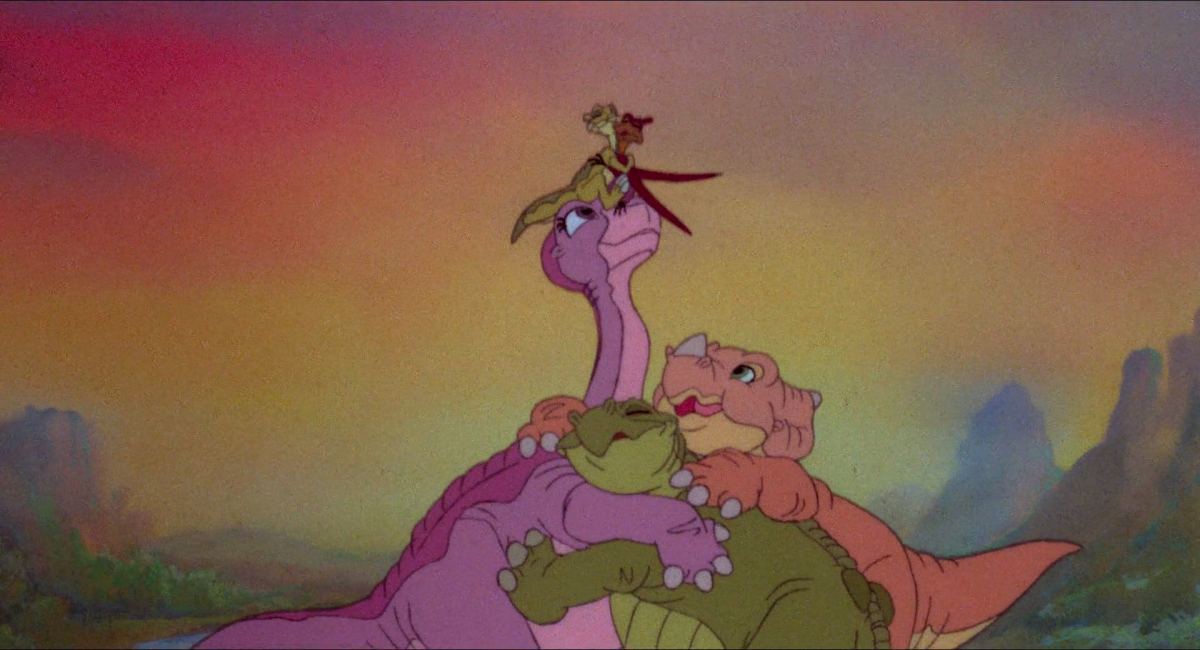 Heather has written 1493 articles for us.