Growing up, I had never watched a Star Trek episode all the way through. My family members weren’t huge sci-fi fans, and they’d flip the channel whenever Star Trek came on. Now I am embarking on an epic nerd rite of passage, chronicling my reactions to every episode of Star Trek: The Original Series (TOS). Watch along here and offer your own nerdy queermo insights! 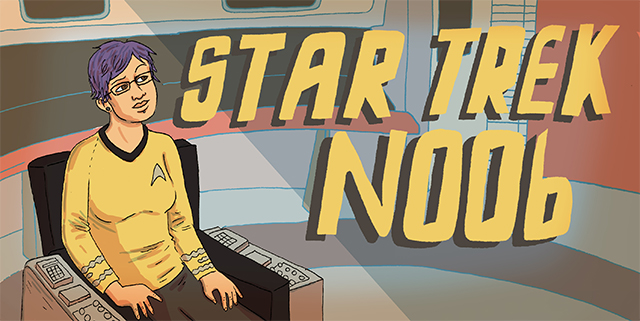 This is George Takei‘s first appearance as Sulu. In an episode called THE MAN TRAP. Oh myyyy. And that’s not even the tip of this queer iceberg. This episode features some gender- and species-bending love and desire. As of right now, I am on my way to becoming a full-fledged Trekkie (or, ahem, Trekker).

The *Other* Pilot Episode.

During the last recap, I covered the convoluted history of “The Cage,” the pilot NBC scrapped. Then a second pilot was filmed, which became episode 3. Phew! When the dust settled, “The Man Trap” officially became the first Star Trek episode to air to audiences on television.

Remember last episode’s characters? Hope you didn’t get too attached to them, because we’ve got an all-new crew, with the exception of Spock! This episode is set twelve years into the future, and Captain James Kirk is now the head of the starship Enterprise. 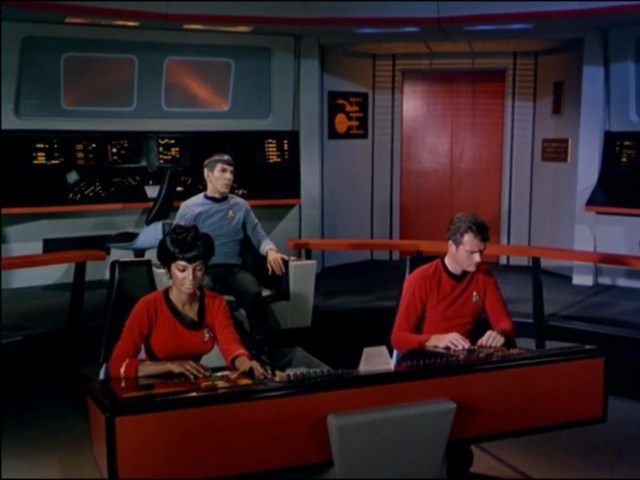 Wait, who are these people?

William Shatner makes his first televised appearance as Captain Kirk! He joins Dr. McCoy and a crew member named Darnell on the Planet M-113, for a routine check on archaeologists Nancy and Robert Crater.

Kirk narrates for his captain’s log, and we learn that Nancy is “that one woman in McCoy’s past.” Seeing an ex-girlfriend after she’s spent 12 years alone on a planet with her husband? Oooooh, drama!

Right after we meet Nancy, we realized that something freaky is going on. Check out the many different faces of Nancy: 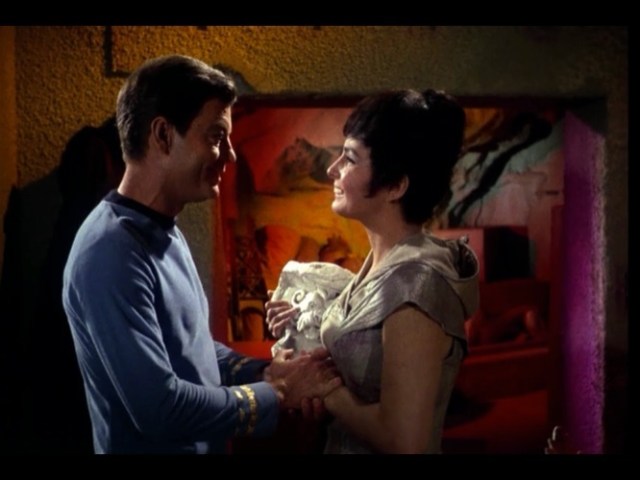 Dr. McCoy: Why honey, you haven’t aged a day! 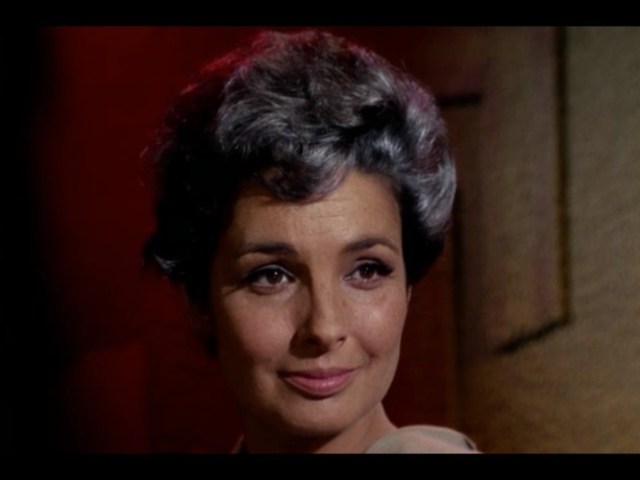 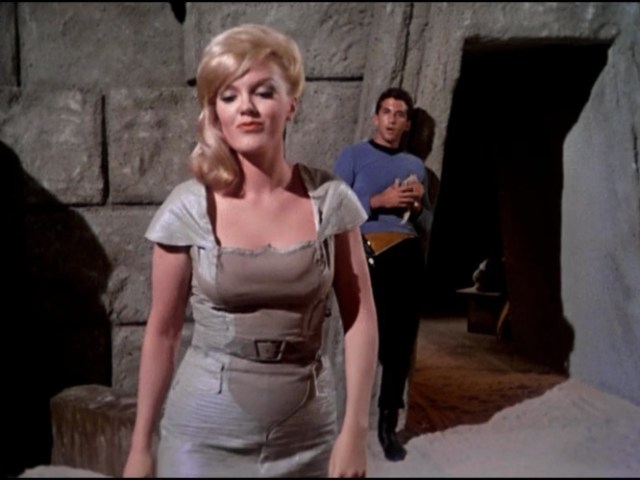 Poor Darnell. He sees Nancy as a bodacious blonde.

Blonde Nancy eyes Darnell, commenting, “It’s quite warm here, isn’t it?” He doesn’t miss a beat, and he runs after her. This is the second episode in a row when a lady uses her feminine wiles to lure a crew member away. Something sinister must be afoot!

Turn Your Head and Cough

After the credits roll, Dr. McCoy has to conduct a checkup on his ex’s husband, Dr. Robert Crater. Talk about awkward! Crater’s not too thrilled about the physical, and he demands that the Enterprise crew replenish their salt supply. So many gay jokes could be made here. 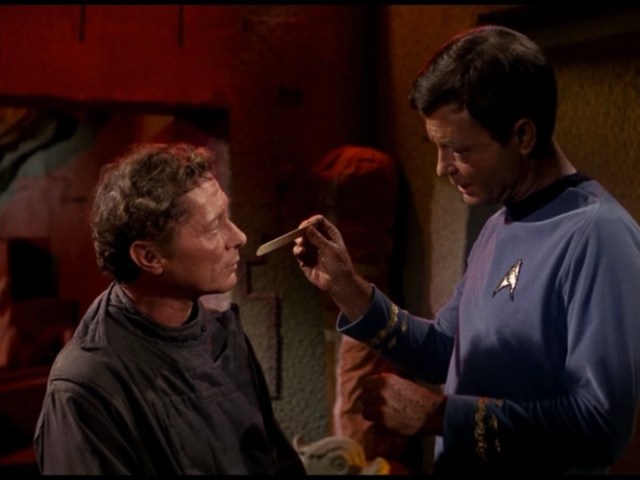 Nice to know they still use tongue depressors in the future.

However, this tense alpha-male moment is quickly interrupted by Nancy’s piercing scream. McCoy and Kirk rush out and find Darnell dead. Nancy claims that the crew member ate a toxic Borja plant before she could stop him. Darnell’s face is mottled with red splotches, which aren’t a symptom of Borja poisoning. Nancy, you sketchy! 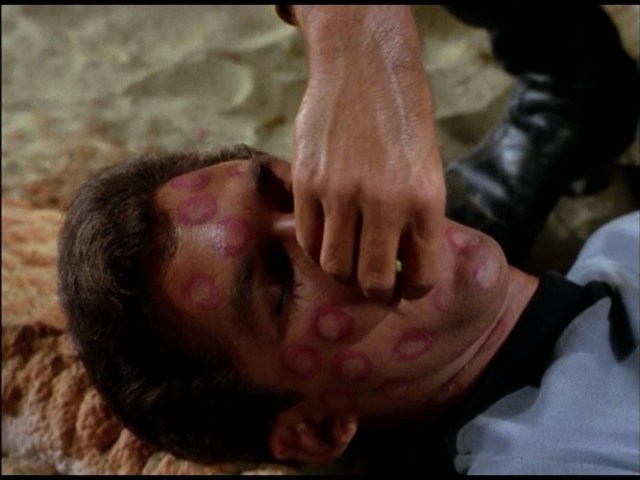 While Kirk and McCoy prepare to beam up with Darnell’s body, we get to meet Lieutenant Nyota Uhura working on the bridge with Spock. I had actually been keeping an eye out for Uhura, since both my parents had mentioned that her inclusion on the Enterprise had been groundbreaking in the 1960s. It’s easy to not bat an eye right now, but after reading about her character creation, it’s apparent that the writers hope to convey specific ideals about future minority representation. According to actress Nichelle Nichols, her name comes from the Swahili word for “freedom.” African-American astronauts, such as Mae Jemison, cite Lt. Uhura as a major source of inspiration, helping them to achieve their dreams for space exploration. 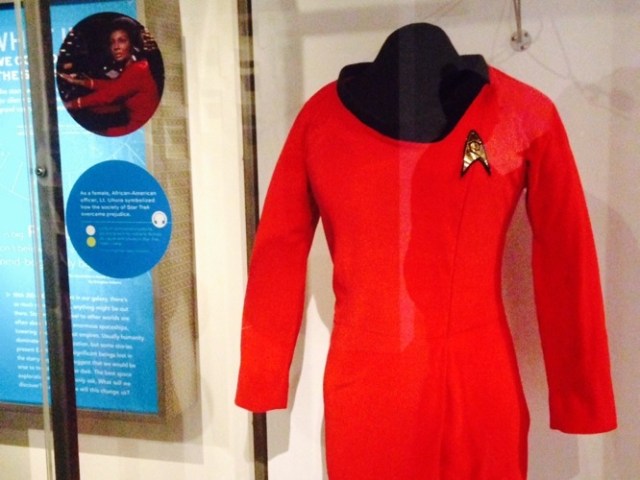 I was so excited to find Lt. Uhura’s uniform on display at the EMP Museum in Seattle a week after watching The Man Trap.

Uhuru’s first scene sets the stage for some of the major differences between humans and Vulcans and the tough conversations that come with interspecies teamwork. She tries to crack a few jokes, and her humor is totally lost on the solemn and clueless Spock. Uhura tries to conjure up some romantic imagery, asking Spock what the full moon looks like on a lazy evening on Vulcan. He stares at her with a stony expression and says, “Vulcan has no moon.” C’mon Spock! You just have to roll your eyes. Uhura replies with a catty, “I’m not surprised.”

This episode really drives home Spock’s character and some of the differences between Vulcans and humans. Uhura scolds Spock for his lack of emotion when they learn that Darnell is dead. Spock explains in a matter-of-fact way, “My demonstration of concern will not change what has happened.” 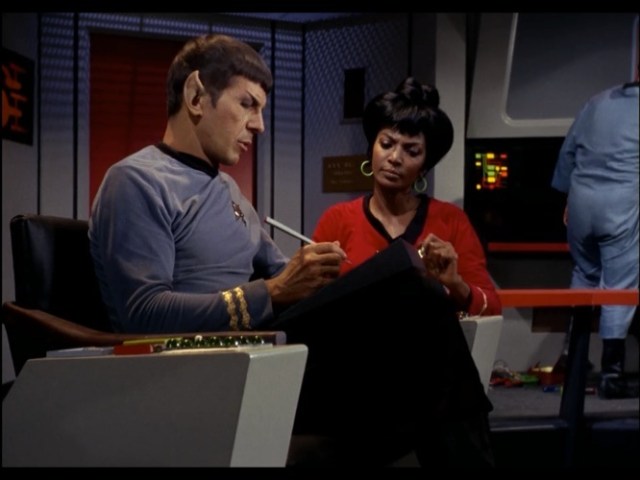 The landing party beams up, and they quickly discover that Darnell is missing all of the salt in his body. That’s weird, didn’t the Craters mention their need for salt? Kirk and Spock highly doubt that an Enterprise crew member would just eat random vegetation on a new planet. So they beam back down to the planet to interrogate Mr. and Mrs. Crater.

Nancy strikes again! While Kirk and Spock search the ruins of M-113, Sturgeon and Green fall victim to the same mysterious death. Dr. Crater hides within the ruins, trying to lure Nancy out with salt tablets, like Elmer Fudd with a carrot. 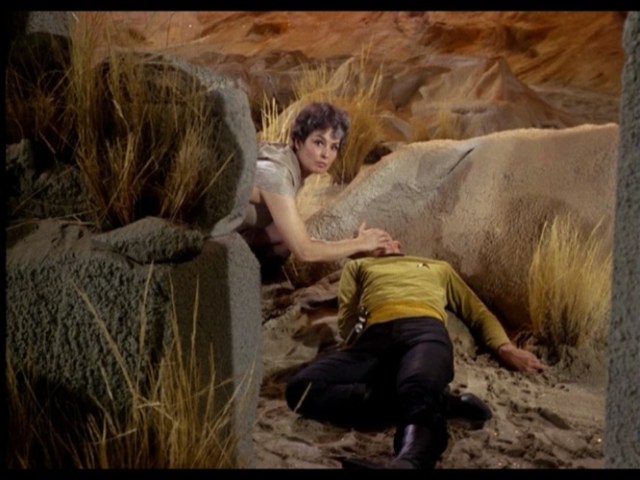 Nancy stares into the camera and whooaaaa, shape shifts into Green, one of her victims. What a kick ass ability! 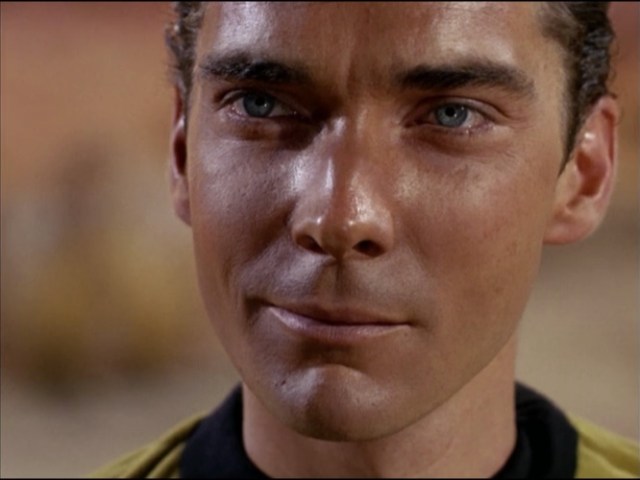 Meanwhile, Kirk and McCoy tromp through the dust, searching unsuccessfully for the Craters. The Doc just can’t get over how young Nancy seemed. Kirk urges him, “You could learn something from Mister Spock! Stop thinking with your glands!” Oooh, burn! The things actors will say to get around censors!

Kirk and McCoy discover Sturgeon’s body, and the Imposter Green joins them. Fearing for their safety, Kirk decides to beam the party back to the Enterprise. I yelled, “Eeee!” at this point, because the idea of being trapped on a space ship with a monster is hella creepy. (Maybe I’ve played too much Mass Effect.) Kirk plans to use their life form sensor to discover the location of Robert and Nancy Crater.

Once Imposter Green gets on board, he starts following crew members with a hungry look in his eye. He stalks Yeoman Janice Rand, watching the salt shaker on a tray of food she’s carrying. Some bro-ish crew members eye her in the hallway, commenting “How’d you like to have her as your own personal Yeoman?” Sigh. It seems that sexism is still alive, even in the year 2266. 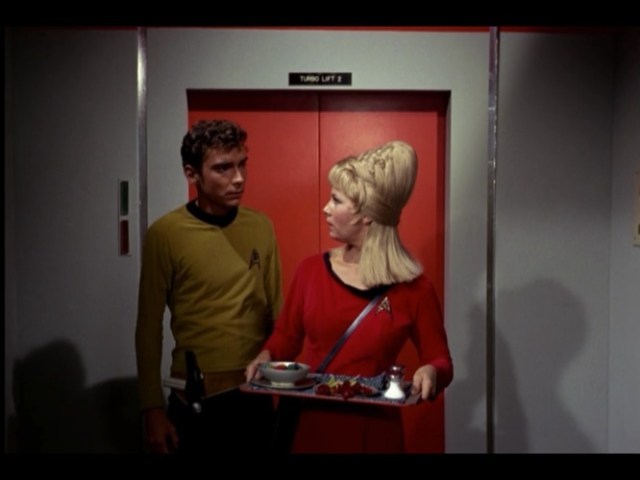 “Why don’t you go chase an asteroid?”

Okay, I had a fangirl moment once George Takei appeared on screen. Turns out that Sulu works in the life science department Botany Section, researching exotic flowers. He’s got some equally fabulous first lines. When Rand drops off his food, Sulu exclaims, “You’re the Great Bird of the galaxy. Bless your planet!” 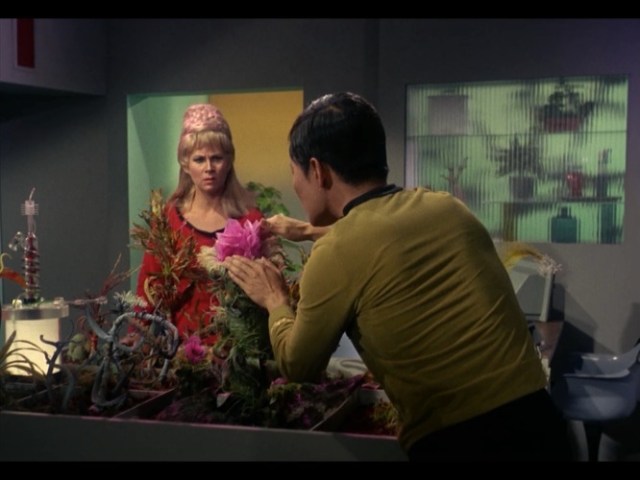 WTF is The Great Bird of the Galaxy?

Sulu and Rand begin to discuss gender assumptions. They debate the gender of a plant, and Sulu insists that her name is “Gertrude.” He wonders why people assign feminine names to objects, asking “Why do people have to call inanimate objects ‘she’?” Great question, Sulu. Why is it that our culture associates femininity with objects and ownership?

I deeply wish that this commentary had continued, but Imposter Green interrupts them. He stands there, acting strange, with the funny look in his eye. The imposter flees. Sulu and Rand find dead crew members with red, blotchy faces and alert Captain Kirk.

The Hunt for Doctor Crater

Kirk and Spock realize that their crew is being picked off on the Enterprise, and they are determined to get information from Dr. Crater. They locate him with the life form scanner and return to the surface of M-113. After an incredibly awkward shootout, they capture Crater and beam him to the Enterprise. 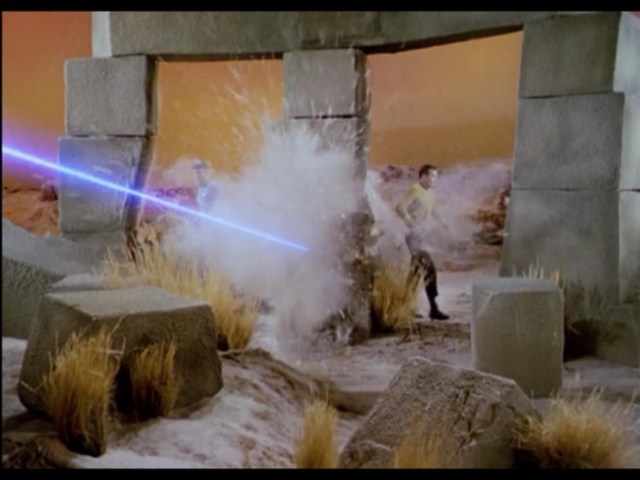 Imposter Green realizes that the net is closing around him once Sulu sounds the intruder alert. He morphs back into Nancy and talks Dr. McCoy into taking some powerful sedatives. (Which pronouns should I use for a shape shifting species?!) The shape-shifter then turns into Imposter Dr. McCoy and joins the crew on the bridge. Dun dun duuuuunnnn. 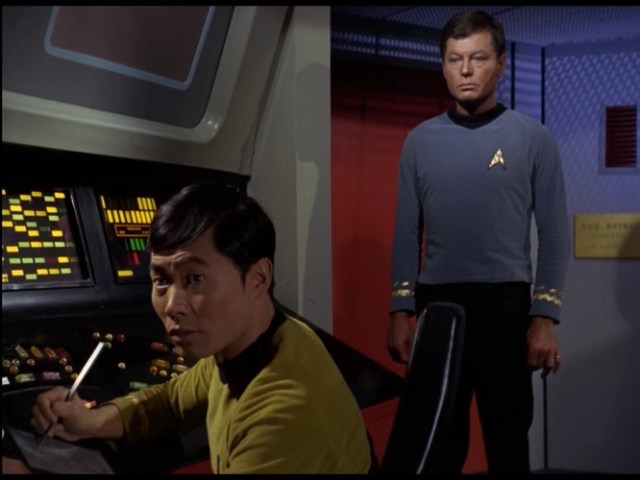 Eeeee, he’s right behind you!

Queer, Cross-Species Love on the Enterprise

Okay, now this is where things get surprisingly queer. Kirk, Spock, Dr. Crater, and Imposter McCoy assemble around a table. Dr. Crater describes how Nancy actually died years ago, after they discovered a shape-shifting monster living within the ruins. It needed vast quantities of salt to survive. It is the last of its kind.

Despite Nancy’s death, Crater began to care deeply for the shape-shifter. “The creature was trying to survive. It has that right.” Crater then goes on to confess his love for the creature while staring at Imposter McCoy who is sitting right there! This gave me the weirdest “Awwww!” moment. It’s a strange, yet very touching moment of queer, cross-species affection. Dr. Crater explains that the creature needs love just as much as it needs salt. 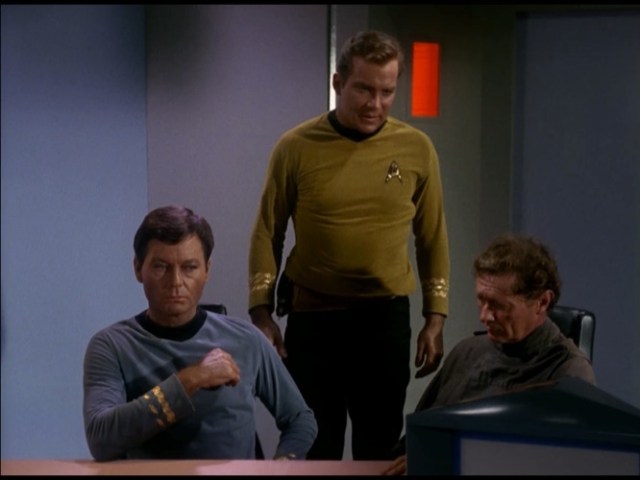 Unfortunately, the shape-shifter’s need for salt and survival trumps love. It kills Dr. Crater, sucking the salt from him. At the beginning of this episode, I really couldn’t stand Crater, but now I feel pretty bad for him! The creature attempts to kill Spock, but since his cells are composed differently, the shape-shifter is unable to kill him.

It morphs into Nancy and moves to attack Captain Kirk. Doctor McCoy wakes up and is forced to shoot Nancy to save the Captain. This is a super mindfuck, because the creature looks like his ex.

Once the creature is shot, the illusion is dropped. We get to see the shape-shifter in its true form as it dies. McCoy is understandably shell-shocked, and in a moment of affection, Kirk tries to comfort him, referring to McCoy by his nickname aboard the Enterprise. “I’m sorry, Bones.” 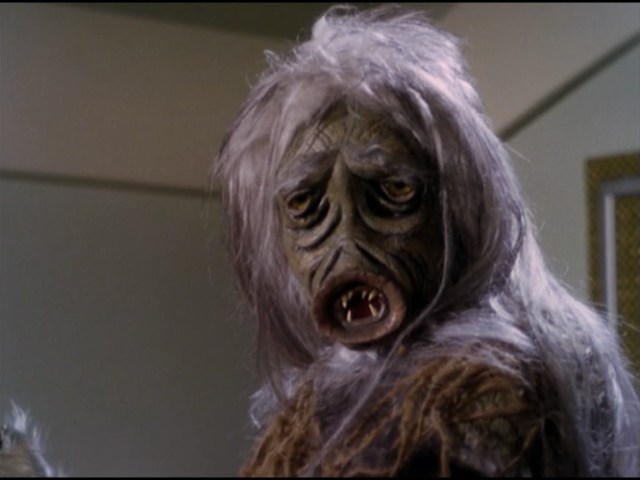 “Unmasking” the illusions in episodes one and two are starting to remind me of Scooby Doo.