As a reminder, last week’s Riverdale ended with Jughead and Archie’s home fully on fire. Between that and the random other fires popping up at the high school and elsewhere in town, there is an arsonist on the loose!!!! And Hiram gutted the fire department as part of his ongoing attempts to wipe out the (newly unincorporated) town of Riverdale so that he can build SoDale. So Archie kicks this episode off with what is instantly one of my favorite pieces of television dialogue in recent memory: 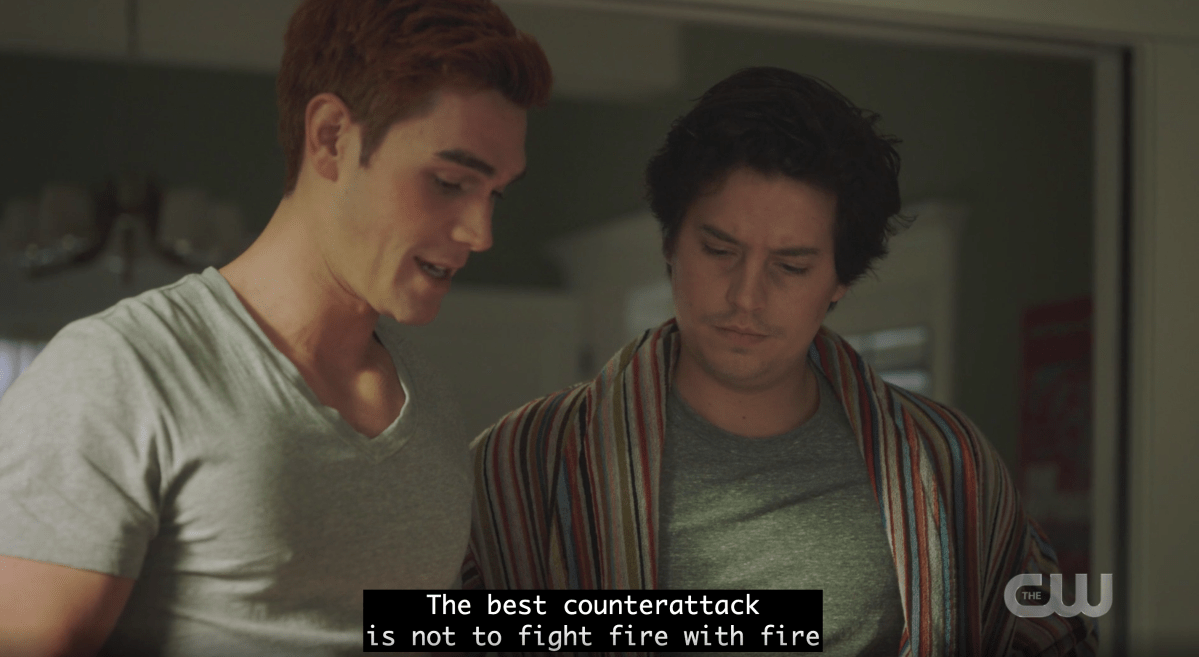 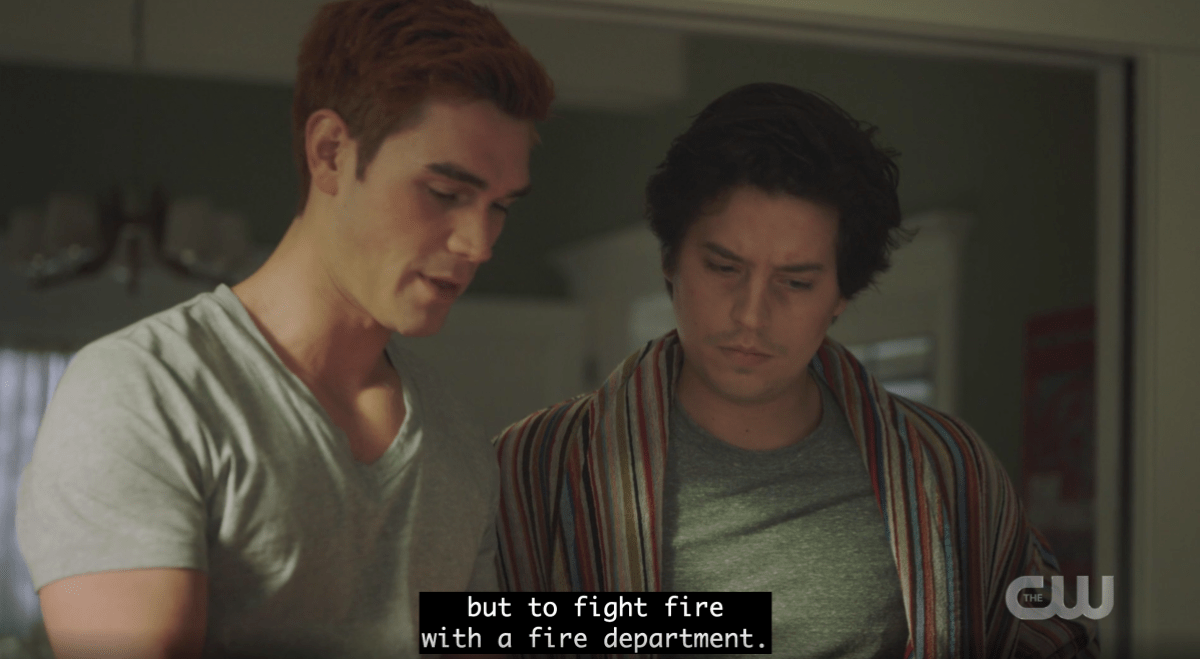 Indeed, Archie spends much of this episode singlehandedly attempting to build a volunteer fire department. His army pal Jackson, who has been struggling to reintegrate to civilian life, shows up to help out. And Fangs and Kevin initially turn down Archie’s request, citing the fact that they do not know anything about fighting fires and therefore should probably not be fighting fires, which checks out. Archie’s solution? TEENS. The students from his RROTC class all eagerly volunteer to fight these rampant fires, and I just gotta say, I actually find it hilarious that our core four are so eager to use their students to serve their own interests. Like Archie is just like yeah okay so long as you get a permission slip, you kids can come help me do the very dangerous work of fighting fires for zero payment. And meanwhile, Veronica is out here teaching teens that money is fake and capitalism is a scam (at least, that’s my takeaway from her lesson) by enlisting them to help build her jewelry store instead of taking a midterm. This is honestly EXACTLY what I expect from Veronica, Archie, Betty, and Jughead deciding to become teachers with zero training.

Veronica’s econ lesson also involves her printing fake money called Riverdale Dollars with her face on it (designed by local reclusive lesbian artist Cheryl Blossom) in order to simulate stimulating the economy. So the kids are (kinda?) paid for their labor with these fake dollars which can then be used at local businesses around town and then eventually converted into real value via the $50,000 investment Veronica makes for this little experiment. I don’t know, it all seems like a lot of work just to basically say THE ECONOMY IS RIGGED. And Veronica is a little too smug about her “valuable teaching moment” when she basically tells her students that by overprinting the fake dollars they are now IN-DEBTED to her. But she is the She-Wolf of Wall Street so I suppose this is to be expected. Anyway, the teens are cleaning up the town now.

Veronica also helps Archie out in his fire department endeavors by flying in her buddy Bernardo Brigsby (from the short-lived Katy Keene) to teach the teens about fires. He is basically like “never run into a burning building alone” so then Archie Andrews naturally seizes his first opportunity to run into a burning building alone. He does it to try to save Earl, a former vet and resident of Sketch Alley who ultimately does not survive. Jackson reacts by grabbing his rifle and attempting to serve some justice to Hiram Lodge, but Archie stops him with a monologue. In the end, Archie does get his fire department. Fangs and Kevin come around to the idea, and the former fire chief is newly inspired to fight back against Hiram’s attempts to pummel the town. We will see how long this pet project of Archie’s lasts. How many clubs/organizations/businesses/hobbies has he started since the beginning of the series? Veronica’s other “economic contribution” to the town is a brand new firetruck, which she says will be paid for with the profits from a Firefighters of Riverdale calendar. Sure!

Jughead is out here spending his Riverdale Dollars on double shots of whiskey, because he is not merely a tortured artist now but a tortured artist who’s also investigating an alien conspiracy theory. Jug and Tabitha sit down with Pop, who tells them about a time fifty years ago when something weird went down at the diner. We flashback to that evening, and WHAT in the Stranger Things?! I was legitimately spooked and delighted by this whole flashback, during which the lights flicker at Pop’s before going out completely and then the jukebox just turns itself on and the gumball machine empties itself and a bright light appears! Pop says, casually, that some people thought it was aliens but that other people thought it could be military testing from a nearby base.

Either way, it’s creepy shit, and he points them toward Nana Rose who was also there that night which leads to even creepier shit. Nana Rose has not historically been a reliable source of information, but Jug and Tabitha interview her anyway, and she tells them, also casually, that she has an unidentified BODY sitting in a maple syrup barrel that she suggests is a mothman/extraterrestrial lifeform. She then ships them said barrel, and Jughead and Tabitha plan to tap a scientist who specializes in the weird to come check it out, but those plans are somewhat thwarted when the barrel goes missing during what is possibly an alien abduction of Jughead OR just a dream. Who can say.

Now, I have some questions about preserving bodies, and if you’re a mortician or a scientist, please weigh in. CAN a body be “preserved” in a barrel of syrup?! My guess is…no. But somehow this episode has forced me to contemplate the logistics of preserving bodies TWICE, because Alice and Betty Cooper also get called into Dr. Curdle’s office where he tells them that the body of a girl found at Swedlow Swamp is from three years ago, so it can’t be Polly. But he also says that the swamp preserved the body, and I have to ask what is in this swamp! Do swamps have preservation qualities?

The swamp, by the way, is Daddy’s Swamp, by which I mean it is Hiram’s swamp. And he doesn’t want anyone nosing around on it because it might interfere with his plans to make the turnpike an essential part of the SoDale development, so he literally kicks the Cooper women off of the grounds even though they are searching for a missing person. They only end up finding Polly’s phone, but Betty learns of another missing girl, whose body also shows up. Three missing girls is a pattern, according to serial killer catcher Betty Cooper, and when she utters those words, her face lights up with what I can only describe as her Serial Killer Catcher Face. It’s a strange and unnerving mix of terror and intrigue.

Betty’s OWN serial killer the Trash Bag Killer aka TBK is back in business according to her FBI boss (who she was also sleeping with), and there have already been two victims. Betty is simply not ready to face down that personal trauma though, so she tells her boss-boyfriend that she’s sticking in Riverdale to handle things with her missing sister and a possible serial killer. The second body found belongs to Margaret, a young girl who Toni had been helping out before she went missing a few years ago. Together, Toni, Alice, and Betty uncover that at least 21 girls have gone missing from Riverdale, which clearly indicates a very big and real problem! I have a feeling that Jughead and Tabitha’s mothmen investigation is eventually going to collide with the Cooper’s serial killer investigation, but at the moment, Jug and Betty are not sharing notes.

I’ve saved the best for last. After years of waiting, I finally have been given a very special gift: ANOTHER RIVERDALE DANCE-OFF. I…can’t tell you how many times I watched the original Cheryl vs. Veronica dance-off from back in the day, but the number is certainly greater than the amount of years I’ve been alive on this planet. In the latest dance-off, Cheryl storms into the gym to seize back her Vixens. Toni very clearly used the Vixens as a way to coax Cheryl out of hiding, and it has worked. Cheryl challenges Toni to a dance-off, but Toni opts to use a proxy (personally, I’m sad we didn’t get to see a pregnant Toni dance because I’m sure it would have been amazing). Just a grown-ass adult having a dance-off with a high school student—very normal stuff here. But the dance-off is truly a Riverdale Moment for the books. It ends in a tie, so Cheryl and Toni plan to share the Vixens, which does not go over very well because Cheryl in general has trouble with sharing, especially when it comes to the Vixens. She plans an extra practice behind Toni’s back, yielding this absolutely perfect line which might beat out the firefighter one from before: 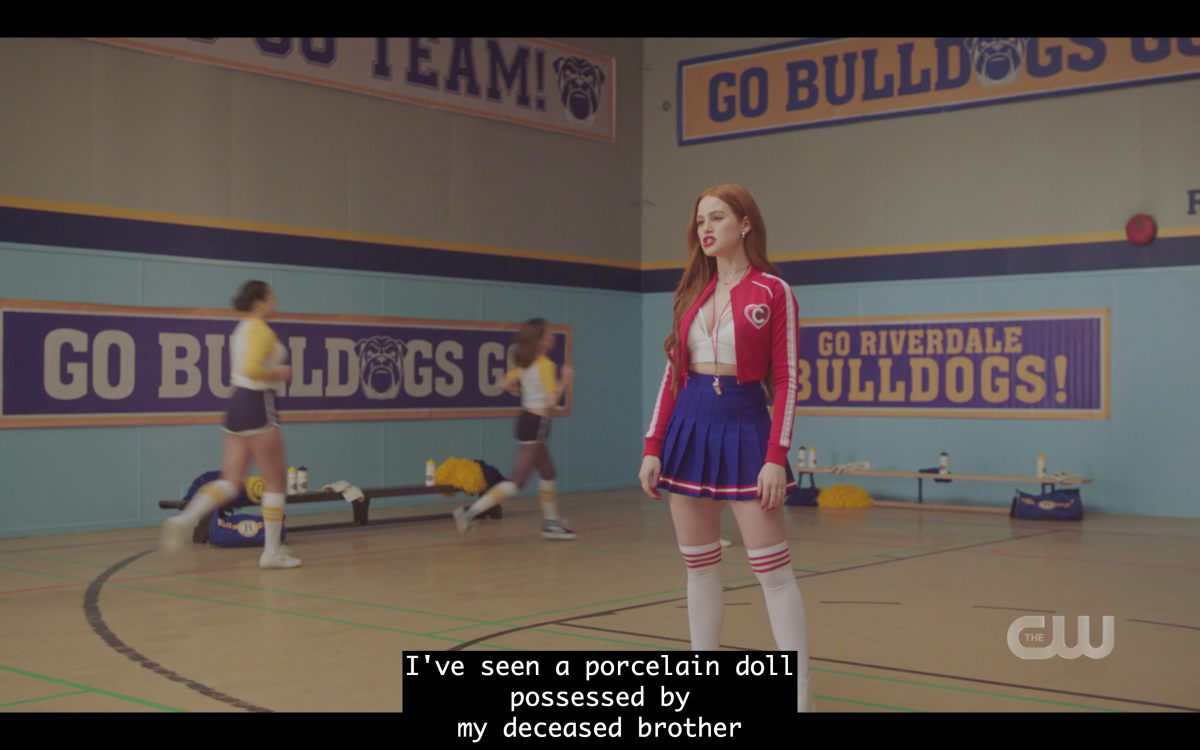 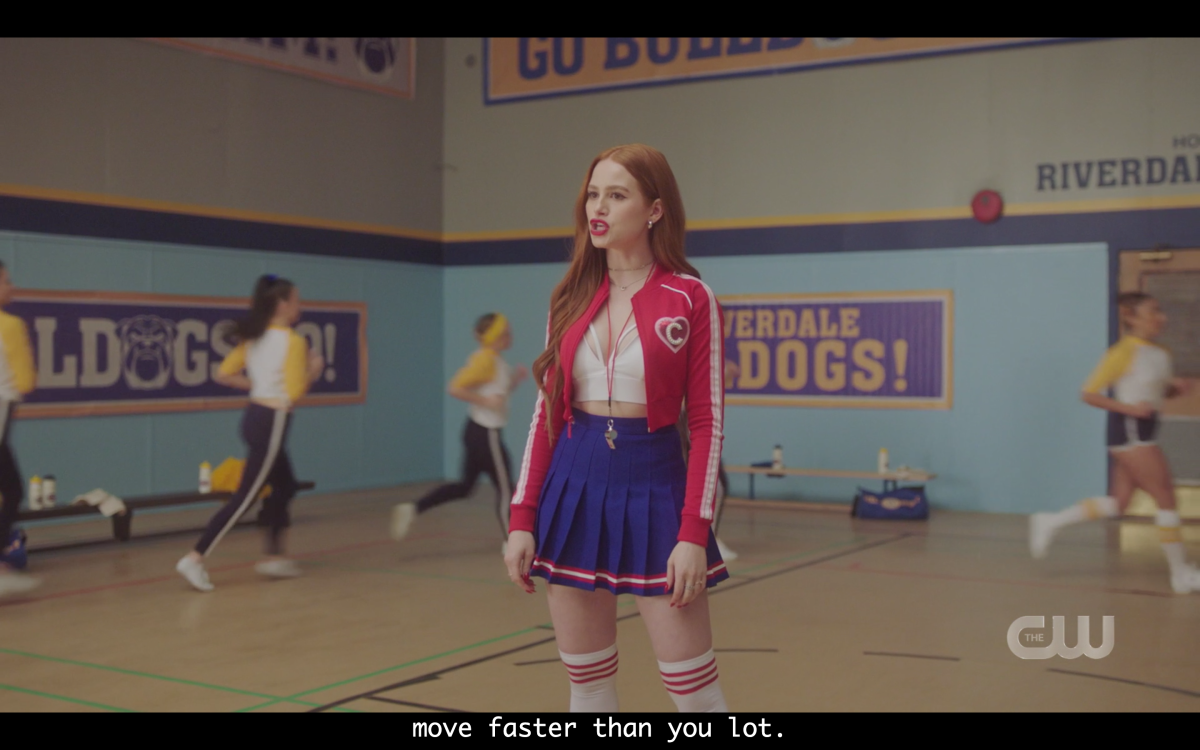 So Toni is successful in luring Cheryl out of her haunted manor, but her plan also kind of backfires, because after all her talk of wanting to undo her family’s villainry in this town, Cheryl’s back to acting like a crimson despot. She’s on a total power trip. Toni confronts her and says that she needs to stop being selfish and needs to start being invested in the town beyond just her thirst for power. I’m kind of loving Cheryl and Toni’s vibe in the post-time jump episodes. There’s more chemistry to their dynamic here, which is not full-on rivalry but still brims with tension, than there was in the later stages of their romantic relationship. Toni sees Cheryl better than anyone else can. She knows that she has suffered greatly, but she also knows that she tends to overcompensate for her own suffering by making others miserable. This is the most fun Cheryl has been in a while. She’s back to speaking like a Shakespearean villain, as seen below. But she also has some more emotional moments. Toni is right to call her out. But Cheryl’s pain is also palpable. Maybe these two simply work better as frenemies-slash-competitive-exes. 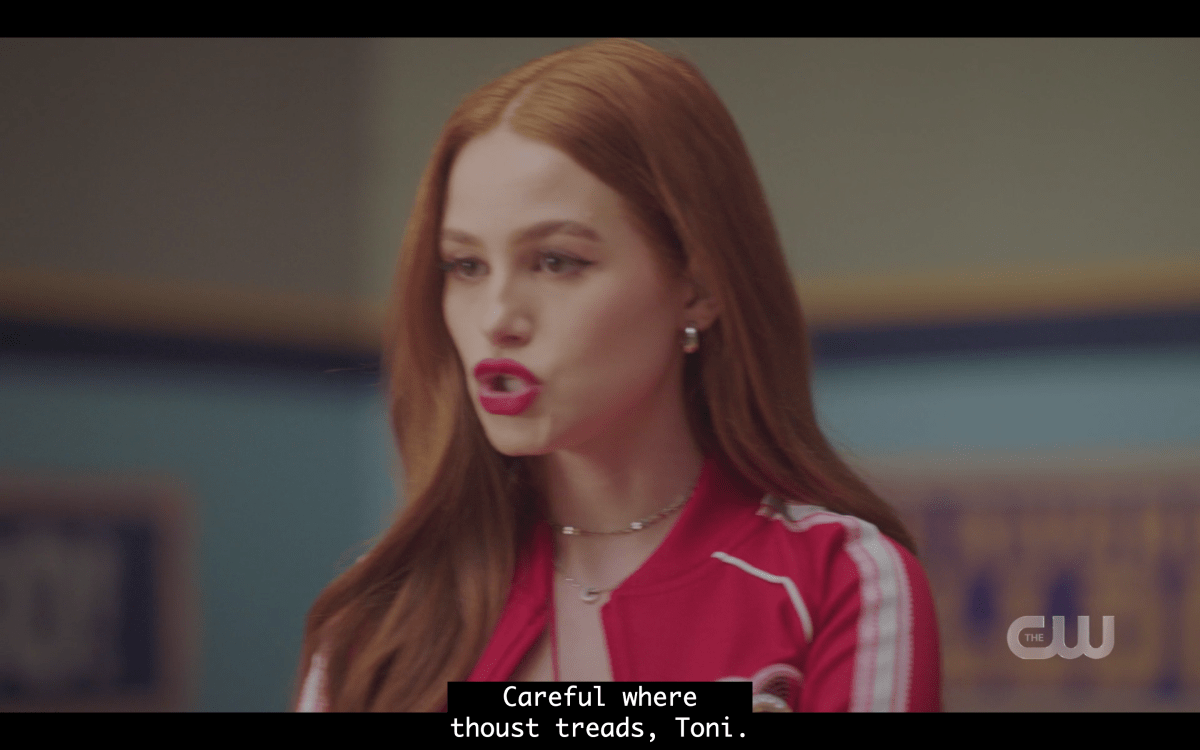 Frightening at times and hilarious at others, it’s another chaotic but great episode of Riverdale that absolutely justifies the time-jump this season.