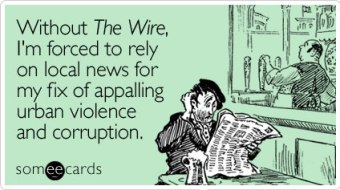 Bill Moyers, who hosted a bunch of videos I recall watching in school, is writing a book called “Bill Moyers Journal: The Conversation Continues, which features extended interviews with 47 “independent thinkers” Bill interviewed on his show between 2007 and 2010.

At Guernica Magazine, they’ve published an excerpt from that book which is a conversation between Bill Moyers and David Simon, who invented The Wire, one of the best shows ever on television.

David Simon has a lot of really smart things to say about America and the ‘war on drugs’ and crime and also about journalism (similar to some of the points discussed while talking about w/r/t The New York Times paywall) (“The Internet, while it’s great for commentary and froth, doesn’t do very much first-generation reporting at all. The economic model can’t sustain that kind of reporting.”) When asked if he “has the answer” after “all these years,” David Simon says:

I would decriminalize drugs in a heartbeat. I would put all the interdiction money, all the incarceration money, all the enforcement money, all of the pretrial, all the prep, all of that cash, I would hurl it as fast as I could into drug treatment and job training and jobs programs. I would rather turn these neighborhoods inward with jobs programs. Even if it was the urban equivalent of FDR’sCCC—the Civilian Conservation Corps—if it was New Deal–type logic, it would be doing less damage than creating a war syndrome. The drug war is war on the underclass now. That’s all it is. It has no other meaning.