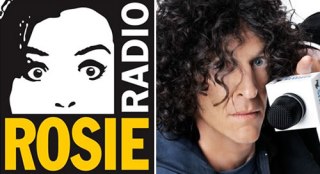 Howard Stern dropped in for a surprise appearance on Rosie Radio and seamlessly turned the tables, grilling Rosie on her own SiriusXM show.  As you are probably aware, Rosie will make her grand return to daytime TV on the Oprah Winfrey Network (OWN) this September after her two year stint on radio ends June 1st. Due to the time crunch, she will initially tape the show at Oprah’s Harpo studios in Chicago, not New York City as previously reported. When Howard asked where she will be living during weeks of filming she admitted the network is hilariously moving her into the Penthouse suite at Trump Chicago which will certainly be interesting after years of ridiculous public feuding with Donald Trump.

Although she split with girlfriend Tracy a few months back, Rosie confirms they are indeed back together and the lesbian Brady Bunch keeps on rockin’ on. Of the break-up she says, “We didn’t really break up. She just has six kids… and I have four. It’s insanity.” Well, yes. Assuring Howard that things are great – including the sex – he demands to meet Tracy and hear all the details.  Although she has no connection to Chicago whatsoever, Howard suggests she is excited about living there part-time because she really needs a break from living with ten kids to which she admits “the concept of having five nights [a week] kid-less is exciting.”

Howard predicts the show will be a lot of pressure for Rosie even though it’s really a “win-win.” Meaning, IF  the show fails, no one is watching OWN anyway… BUT!, if she actually gets something going at the network she will be considered “a God.” She discloses the Oprah deal is worth about $10 million a year, though she claims she didn’t take the job just for the cash (despite having to support a small army and losing a fortune trying to produce Taboo on Broadway). Finally, she tells Howard about the numerous offers she received from major networks to return to daytime TV for the first time since The View. Looks like she was about to finalize a deal with NBC when Oprah wooed her to OWN at the last minute. She tells the story of Oprah’s visit to her home which she readily admits was probably a “crazy check” to see just how nuts she is (or isn’t).