Welcome to the forty-seventh installment of  Queer Your Tech with Fun, Autostraddle’s nerdy new tech column. Not everything we cover will be queer per se, but it will be about customizing this awesome technology you’ve got. Having it our way, expressing our appy selves just like we do with our identities. Here we can talk about anything from app recommendations to choosing a wireless printer to web sites you have to favorite to any other fun shit we can do with technology.

This one night I was jaywalking across a usually deserted street near my place when a car came far too close too fast and I know, I know – I was stupid but so too was this dude clearly mistaking both the speed limit and lane markings for optional guidelines and really at the end of the day all we need to remember is that stupid things happen all the time to stupid and not-stupid people and then sometimes you die.

I don’t think a lot about dying – and even less about what lies beyond that – but when this happened the first thing I thought was, “If I die now, my partner will never get to read the Behemoth.” (Yeah, it got a name of its own in my head.)

So I got home and I told her in an e-mail that when I’m gone, I want her to have all my words: from the HTML archives of my earliest, angstiest LiveJournal posts to the Autostraddle works-in-progress that I now draft on Google Drive. There isn’t much in there that is of what you’d call “value,” but it’s what I value nonetheless, and it’s what I’d want her to have of me if I were no longer around to send her caffeine and/or feelings-fuelled e-mails in the middle of the night. 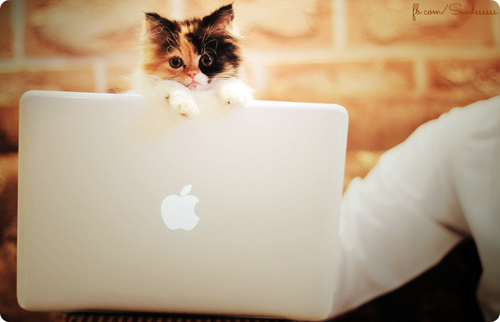 More of our lives are lived digitally by the day, and it’s time to start thinking about what happens to all this when we die: do we want it to go to someone else, to be erased, or to remain indefinitely in the ether(net)? Since e-mails sent hastily after near-death experiences probably don’t stand a chance as my last will and testament in court (I checked), let’s look at the ways that you and I could make this work.

Let the Corporate Giants Take Care of You

Let’s be real: most of the stuff you have out there that’s worth either burying in a digital graveyard forever or left to linger on a loved one’s hard drive is probably concentrated in the hands of a very, very small group of companies because yay, tech oligopolies! Whatever your feelings about the data trade or capitalist hegemonies, it’s worth looking into what these companies can do for you (or to you) when you die.

Google launched its Inactive Account Manager (or less euphemistically, “Google Death”) earlier this year, a tool which allows you to decide what to do with your data on some or all of their services – Gmail, YouTube, Drive, Blogger, Picasa Web Albums, etc. – after a user-specified period of inactivity (from 3 to 18 months). One month before that deadline, Google will send you either an e-mail or a text message; if they still don’t hear back from you, your data will be sent to up to 10 trusted contacts or deleted entirely. 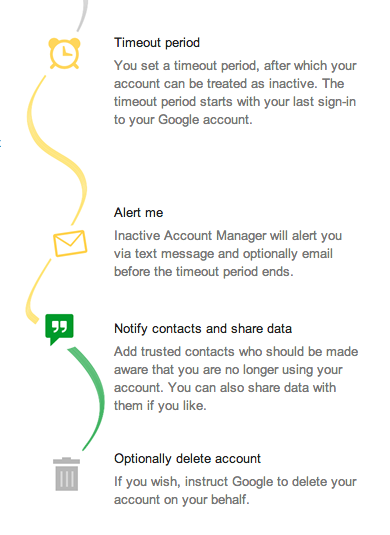 Other services have less comprehensive tools in place, most requiring action only after a person is deceased. Here’s a summary of some company policies:

Each company requires different levels of verification or legal documentation. Facebook and LiveJournal both require a court order before they will release anyone’s data, and make no guarantees that they will. WordPress.org does not have a deceased policy as it provides users with content management software and does not directly deal with content ownership or hosting. Tumblr does not have a deceased policy on its site, but when asked, said they “would need to hear directly from the family” before deciding what to do.

Companies that deal with money or digital property are trickier. PayPal will issue any remaining funds via a check in the account holder’s name once the estate executor faxes in legal documentation. Content you “own” on Amazon or Apple‘s App Store and iTunes (music, ebooks, etc.) are technically non-transferable and can be deleted if anyone other than you accesses them – online copyright and ownership laws are infamously restrictive but also constantly evolving, hopefully in favour of consumers.

Looking for a solution that puts all your data in one place? The NSA could probably help you with that. Rumour has it they’re not the friendliest people, though, so if that fails there are third-party services you could use to pass on your digital information and data upon death.

Legacy Locker accounts store your usernames and passwords for any website to be assigned to your beneficiaries. The site requires you to designate at least two trusted people as “verifiers” who should have access to your official legal documentation, such as your death certificate, so that they can confirm that your assets should be released. It also provides a “Legacy Letters” service which delivers notes electronically to friends, loved ones or colleagues, as well as document backup and video upload services for a fee.

A basic account (with up to three assets and one beneficiary) is free, while an unlimited account costs either an annual fee of $29.99 or a one-off fee of $299.99. 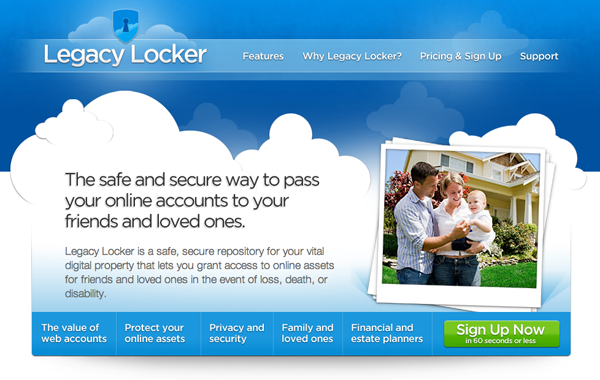 Want to pass on more than your passwords? DeadSocial lets you create scheduled messages to go out on Facebook or Twitter after you die, to “make sure that you are able to say “goodbye” in your own unique way.” LIVESON, which is still in alpha testing, updates your Twitter account after you’re gone by analysing your likes, tastes and syntax on your original feed – so that “when your heart stops beating, you’ll keep tweeting.” I think I’ll be taking my Likes to my grave (and they’ll probably do me as much good there as they do now), but y’know, you do you. 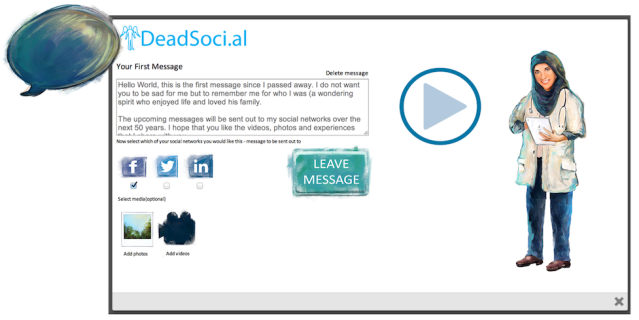 Bequeathing digital assets via a physical will is still a thing! Who woulda thought. I’ll admit that I haven’t done the first thing to come up with my own, but you smart fancy queers – and in particular, my smart fancy queer lawyer-friend Carmen, who helped me with this bit – probably have your shit together better than me.

DON’T keep your passwords in your will. It would be way faster than having the executor go the official legal route with each company, but in order to have a will upheld, it likely has to be filed in court, and then it becomes a public document. You could keep a record of all your passwords (or other information that would allow someone access to your accounts, e.g. answers to security questions) elsewhere and leave directions in your will about how to get to that, or sign up for a password app to keep it all in one place and give someone access to that. Keep in mind, however, that someone else accessing your account is often a violation of companies’ Terms of Service and gives them grounds to terminate your account entirely.

Now if we’re going really old school, put everything you have on a hard drive. Will that hard drive to someone. Google, Facebook and Twitter have all recently released tools to allow you to download all your data, and most blogging platforms have long had offline archiving tools. Pros? Really hard to mess up, even for the least tech-savvy of executors. Cons? It’ll need constant updating (though you should be backing up your ish, anyway), it’s not always easy to make sense of downloaded data (you’d need the person with the hard drive to know what to do with it), and it’s probably gonna be ridiculously stressful making sure no one gets to that stuff – essentially a digital diary – while you’re still alive.

The law’s a tricky, tricky old thing though, and that’s why we send these people who like suits and talking away for years in schools and then release them into the Real World to take all our money to make sense of it all for us. To find a digital-assets-in-physical-will situation that works for you, especially if you’ve got particularly valuable data, get professional legal advice. 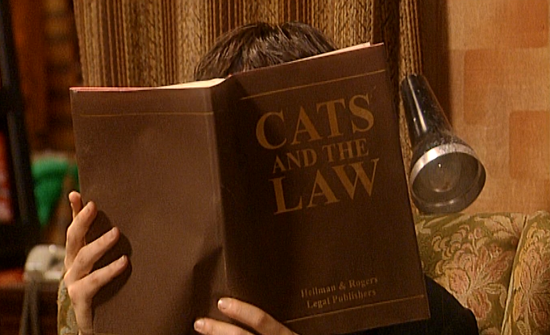 This picture is relevant because the internet is cats. (Real talk: you should probably think about what’s gonna happen to your cats too. I’m sorry. But this is important.)
via Black Books Wikia

I know that all of this is probably more than a bit overwhelming, not least because most of us haven’t started thinking about what happens after we die, much less about the value of our brilliantly captioned cat photos. Start small: maybe set up Google’s Inactive Account Manager today, write a rough list of other online things that are important to you next week, and so on. You know what’d work best for you!