Welcome to the sixth installment of Queer Your Tech with Fun, Autostraddle’s nerdy new tech column. Not everything I cover will be queer per se, but it will be about customizing this awesome technology you’ve got. Having it our way, expressing our appy selves just like we do with our identities. Here we can talk about anything from app recommendations to choosing a wireless printer to web sites you have to favorite to any other fun shit we can do with technology.

One of the most common questions I get is about backing up. It’s both of one the most nebulous things for most consumers and, at the same time, one of the most important. To add complication to the situation, much like life, there are about a billion and a half different ways to do it. Plus it’s not just computers that need backing up anymore – in the era of smart phones and tablets, we’ve got a whole new category of device that needs a copy. This post is part one of backing up: discussing what it is, why we need to do it, what the different kinds of back ups are, etc. If you’re a more advanced user, the subsequent posts in this mini-series are going to be more for you – different off-site back up services, setting up a wireless hard drive in your house, etc. We’re also going to go over backing up smart phones of different ilks in subsequent posts as well. But don’t worry – I won’t subject you to six Saturdays of nothing but backing up. I’ll break it up with fun stuff too.

What Is Backing Up and Why Do I Need It?

Backing up is basically creating a second copy of your data and sticking it somewhere else. Data can include things like your term paper, the past decade’s worth of pictures, phone numbers and emails addresses. Basically, if it’s saved on your computer it can be included in a back up. The easiest way to think about backups is this:

I tried to find some way to explain it with a semi-naked girl involved and I succeeded! The wind represents any number of things that can happen to your computer, smartphone or tablet. But whatever it is, it’s losing data. In this case, it’s Colin Firth losing the book he’s written. The back up would be the copies he should have made of his typewritten pages. In the computer world, just as in life, redundancy is safety. If you have a copy, you don’t have to go to heroics to save your data, because there’s another copy, so no big deal. And, unlike jumping into a lake, heroics in the computer world can be expensive. Saving data off a failing drive can cost up to $1,300 depending on how big the drive is and how much is wrong with it.

So why do you need to back up? Well, there are a ton of things that can happen to your technology. The first and most recognizable type of incident is physical damage. Ever seen someone run over a computer with a car? I have. Twice. And neither time were they expecting to or intending to do it. The second type of thing is failure – technological components have a limited life span and, like anything else, nothing stays new forever. Your hard drive could spontaneously drop dead tomorrow and it wouldn’t be through any fault of your own. The last type of thing is way harder to deal with, diagnose and treat: viruses and software corruption. Issues that have nothing whatsoever to do with the parts of your computer that you can touch. This is a unique beast because, depending on the type of back up you’re using, your backup may contain your virus or software corruption. But never fear. There are ways around that. 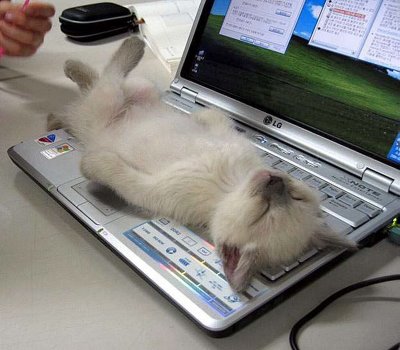 The cutest computer crash I ever did see. via cimba7200.blogspot.com

But how many backups should we have? I usually recommend two or three because I’m neurotic, but if you’ve got even one you’re already ahead of the curve. The truth is, you can never really have too many backups with the provision that you know where to find your information on them all. You have to know where they are, how to access them, and what’s on them for backing up to function correctly and efficiently for you, or restoring your information is just as stressful as losing it in the first place. Keep in mind that the right time to backup is right now, not when your drive is starting to fail. The more tenuous the drive is, the more likely trying to back up the drive will actually cause the drive to fail in a fragile state. Basically, what I’m saying is start when you don’t have a problem, like well-doctors visits and holistic medicine.

What Kinds of Backups Can I Have?

There are a few distinct categories of backups to have. Backup strategies can be more than one category or kind of in-between categories, and we’re going to go over solutions from every category for different types of devices and purposes.

Unstructured. This is what I like to call the old-school method. Remember your mom burning her brand new digital picture library onto CDs every so often? That’s an unstructured back up. Just a pile of media. It’s really hard to recover using this type of back up because you don’t really know what is where on which CD. Or maybe even where you put that pile of CDs.

Full Backup. This is a carbon copy of everything on the hard disk or about the operating system, warts and all. If you do a bunch of full backups on top of each other, it’s a huge waste of space, because there files that have never changed that are saved multiple times.

Incremental. This back up does a full-back up, total carbon copy of everything, to act as a base-layer, then backs up changes on top of that base layer to save space. It backs up all the changes that have been made since the last back up of any kind. Think of it as layer cake – nothing would be possible without that layer on the bottom, but we don’t have to put a new base layer down every time we want to frost it and put something else on top. To restore files from this back up, you first have to restore the full-back up, then the subsequent changes, which makes the restore process a bit of a pain in the ass.

Differential. This is quite similar to an incremental back up in that a full-back up, a total carbon copy of everything, goes down first. But then it saves data that’s different since the last full back up. It’s easier to restore than the incremental backup.

Reverse Delta. This is a pimped out version of the incremental and differential backup types in that stores a mirror of the current device plus different iterations of the device in previous states. A good example of this is Time Machine for Mac – the software that backs up a copy of your computer once totally and then just puts the changes right on top of it. This is a good way to back up because then you could go back to last Tuesday or last month, depending on what you need to do. And you can pull-individual files out of this type of back up, making it wonderful if you’re combatting software corruption.

Where Can I Store My Backup?

On a variety of things! We’re going to talk about external hard drives, wireless hard drives, off-site services (that would be Cloud storage like iCloud or CrashPlan!), flash drives and Dropbox. My usual advice is to have one offsite service and one on-site backup. It may seem a little redundant, but remember! Redundancy = safety! What happens if your house burns down? Your computer and your external hard drive were in it! Oh shit! That’s why you’ve got a back up some place else, too!

That’s it for Part 1. Have I convinced you that you need a backup yet? In Part 2, we’re gong to be discussing how to select an external hard drive that’s right for backing up your computer. In the mean time, just try not to run over your computer with your car and drag the really important things into Dropbox.