I’d always heard that women were crazy, and that we’re super difficult to deal with, let alone figure out. We’re like ticking time bombs of inexplicable and confusing insanity! Everyone else (men) are chill and reasonable, and we’re all fucking nuts — and if we’re not crazy, it’s only a matter of time before we’ll be crazy. I didn’t know much at 10 or 11 years old, but that stereotype had definitely been ingrained. Perhaps you can relate? So when I started feeling Every Available Feeling a few years later, I just chalked it up to being a crazy girlperson — someone’s future crazy ex-girlfriend, or future complicated mess in some way or another. And I was ok with that, actually, because being complicated and tiptoed around (lest I DETONATE!) was pretty satisfying at the time, even if I didn’t feel interesting enough to be complicated.

For those times when I was really seizing my Womanly Psychosis (“feelings”), I would find sisterhood and solidarity in the female musicians of our time (“the ’90s”). I’m realizing now that, taken out of context, some of these lyrics are terrifying. Many of them give me the warm feeling of “thank goodness I’m not dating the singer of this song,” followed by “wait, I’ve been a version of the singer of this song. Hm.” This is the soundtrack to a decade’s worth of processing and embracing emotional intensity.

To Be* An Emotionally Intense ’90s Woman

[*or to be in a relationship with / to break-up with] 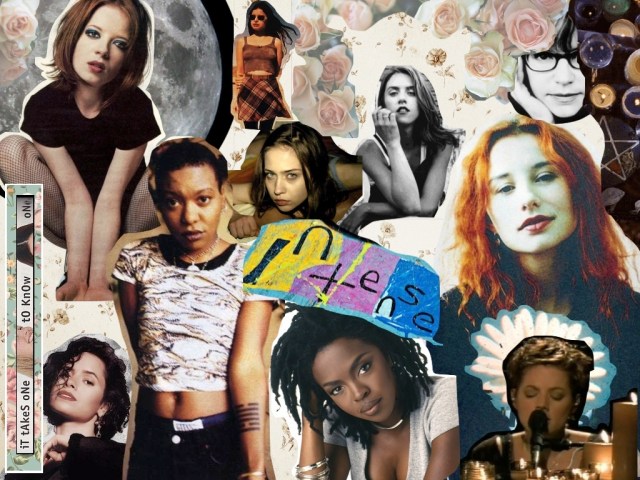 You Oughta Know – Alanis Morissette
Bitch – Meredith Brooks
Jealousy – Liz Phair
You Were Meant For Me – Jewel
Silent All These Years – Tori Amos
I Want To Come Over – Melissa Etheridge
Do You Love Me Now? – The Breeders
Nothing Compares 2 U – Sinead O’Conner
Stay – Lisa Loeb
Don’t Speak – No Doubt
Untouchable Face – Ani Difranco
Take A Bow – Madonna
Fade Into You – Mazzy Star
Sleep To Dream – Fiona Apple
Only Happy When It Rains – Garbage
Rid Of Me – PJ Harvey
I’m The Only One – Melissa Etheridge
Jealousy – Natalie Merchant
Adia – Sarah McLachlan
I Will Always Love You – Whitney Houston
#1 Crush – Garbage
Violently Happy – Bjork
Who Is He And What Is He To You – Me’Shell Ndegeocello
Angry Johnny – Poe
Ex-Factor – Lauryn Hill

What did I leave out? Let’s light some candles and talk about it.