Jenna Wolfe, a correspondant for The Today Show, announced this morning on Today that she’s gotten preggers via artificial insemination from an anonymous donor and will be birthing a child into this fabulous world of ours circa August. Furthermore, she’ll be sharing this joy with her smokin’ hot partner, NBC News Correspondent Stephanie Gosk.

People Magazine, a publication that loves Coming Out almost as much as it loves Babies, has done a story on the couple (the full story will appear on newsstands Friday, for now we must settle for the online excerpt), in which Wolfe tells the magazine, “This is the most exciting thing that has ever happened to us. But I don’t want to bring my daughter into a world where I’m not comfortable telling everyone who I am and who her mother is.”

Stephanie Gosk, her dapper girlfriend, added: “The beauty is that we live in a time where there’s no need for secrecy. This is a spectacular time for us.”

Gosk and Wolfe have been together for three years and although they plan on getting married someday, right now their primary focus is on the little human in Wolfe’s belly. Says Gosk: “For a long time I had feared I would never have a child.” Wolfe testifies that “we’re constantly on the road. It’s a miracle we got it all together.”

Here’s the video from this morning’s Today Show:

If you’re anything like me, you’ve seen the Today Show maybe three or four times and didn’t know who Jenna Wolfe was until this morning. So, some background: Wolfe was born in Jamaica to a Puerto Rican Jewish father, Bennet Wolfeld, and a New Jerseyian Jewish mother, Sheila Greenfeld. The family moved from Jamaica to Haiti when Jenna was five and then to the United States in 1989. In a recent episode of Today, Jenna returned to Jamaica with Lester Holt, whose maternal grandparents are from Jamaica, to “explore their roots,” at which time Jenna revealed that Bob Marley was their next-door neighbor at some point.

A 1996 graduate of Binghamton University, Jenna speaks three languages (English, French & Creole) and got her start in broadcasting as WHPL-TV Philadelphia’s first female sportscaster. She also worked as a Today Show intern and spent two years (2002-2004) as reporter-anchor for MSG Sportsdeck, followed by three years (2004-2007) as a weekend anchor and morning sports anchor on WABC’s Eyewitness News in New York City. She hosted a sports-focused segment called “Jenna’s Beef,” and, according to the New York Daily News, added “a bit of fun, edge and a sense of humor to the mix.” 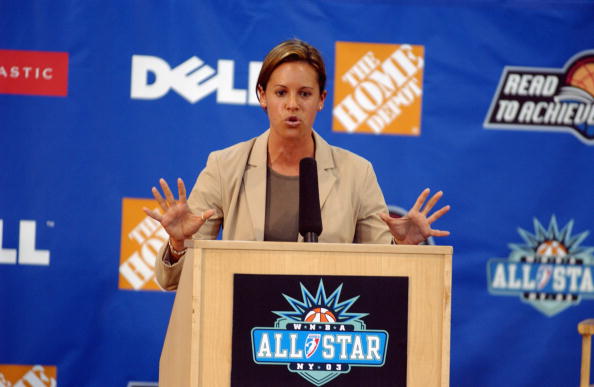 In 2007, Wolfe left ABC for NBC, where she co-anchored the Weekend Today show for five years. Last year she was moved from her co-hosting spot to the news anchor position and was replaced as co-host  by Erica Hill. According to The Daily Mail, which is usually full of shit, this move was seen as a demotion and Wolfe was unhappy about it, and furthermore apparently Lester Holt was “relieved” because “he felt that Jenna, who is a fitness buff, was constantly pushing to do on air exercise segments in which she essentially kicked his ass.” The Daily Mail also hastened to add that whereas Erica Hill was married with two sons, Jenna Wolfe was “single, no kids” and “rumored to be having an affair with Matt Lauer in 2010 but both parties vehemently denied this.” Fans, still burned by Ann Curry‘s dismissal, were upset about Jenna’s departure and what they saw as the show’s overzealous replacing-people habit. That all happened five months ago, by the way, and now she’s five months pregnant! 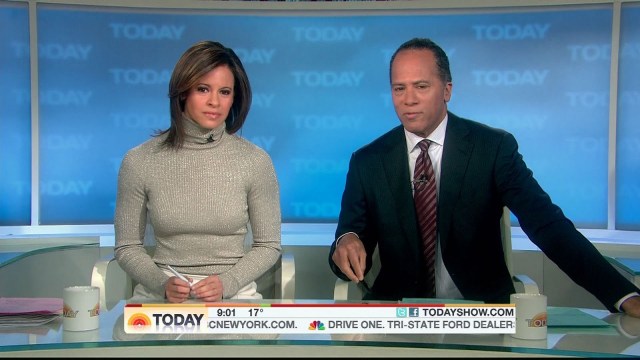 Stephanie Gosk, a Georgetown graduate, spent time in the Domnican Republic as a Peace Corps volunteer and has recently covered on-location stories including Osama Bin Laden, Gaza, the 2012 London Summer Olympics and the Arab Spring. 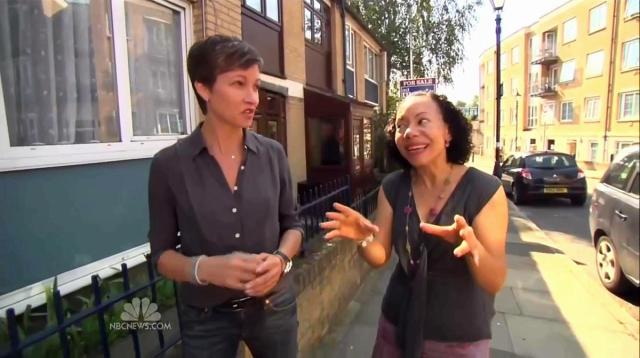 Wolfe will be blogging on The Today Show’s website about her pregnancy. In her first post, which went up today, she talks about leaving behind her life of swimming with sharks and jumping off cliffs in favor of being a Mom, and how this isn’t really the direction she anticipated for her life:

Just writing those words — “I’m pregnant” — is surreal to me. After all, I was never the kid that ran around playing house. I never had daydreams about being a mom and raising a family. I was the kid who jumped out of trees and skinned my knees and taunted bees. As a kid, I would have chosen raising my adrenaline over raising children any day of the week. But then a funny thing happened on my way to adulthood … I grew up. I ran smack into the old nursery rhyme: “First comes love. Then comes marriage. Then comes Jenna pushing a baby carriage.” Granted, things aren’t falling into that exact order. (And are they still called carriages? Aren’t they strollers? Clearly I have a lot to learn.)

She also talks about her relationship with her girlfriend and what prompted them to make babies now:

Stephanie, a foreign correspondent here at NBC, spent years in war-torn countries, risking life and limb in the most dangerous places on earth to tell amazing stories. Ever since I can remember, I’ve been a thrill-seeking, dare deviling, adventure-hopping, fearless chick who enjoys the rush of life. Between the two of us, we’ve seen and we’ve done more than most will in a lifetime. And yet both of us agree that THIS little girl will be the biggest and best adventure of our lives.

So why now? After all the reasons why I didn’t think I wanted a baby, why did we decide to do it now? You want the truth? Something just sort of told me it was time. Two years into a great relationship and we felt like we wanted to share our adventures with a wide-eyed, little person. The more we talked about it, the better the idea seemed. And so in December, we embarked on Operation Baby. And might I just add that despite the morning sickness, it’s been the best decision we’ve ever made. (But come back and talk to me when the kid is screaming her lungs out at all hours of the night.)

It says a lot about how much the climate has improved for LGBT people that the focus of Jenna’s announcement today was her pregnancy moreso than her same-sex relationship. It’s unclear, actually, if Jenna was ever really “in the closet” — it appears she attended a 2010 benefit for the National Gay & Lesbian Journalist Association, but that’s the extent of her homosexual paper trail.

Jenna now joins the growing ranks of homos currently visible on major news networks at any given time, such as Jane Velez-Mitchell, Rachel Maddow, Suze Orman, Thomas Roberts, Anderson Cooper, Don Lemon, [redacted] and Steve Kornacki. Before long we will probably take over the entire world.