When I was coming to terms with my gender identity in 2012, my initial understanding of the transgender experience was rudimentary at best. At issue were the run-of-the-mill things like obtaining hormones, finding clothing that worked with my rapidly changing body and figuring out which name would suit me perfectly.

The idea of how my life would operate in the broader society was an elusive concept. Figures like Janet Mock and Laverne Cox were well on their way to mainstream success, but the media landscape wasn’t teeming with transgender fascination like it is currently, and piecing together a map for my future seemed nearly impossible. Initial support came a peppering of online articles, anecdotes and transition how-to guides, but they overwhelmingly focused on trans women who were considerably older and white.

As a young black trans girl, I found that most of the information that contained even a sliver of nuance were statistics. And from there I realized that the narrative for girls like us is often deeper and darker. I learned that as a transgender person of color, I am six times more likely to experience physical violence from the police than my white, cisgender queer counterparts. I learned that while 72 percent of anti-LGBTQ homicides occur to trans women, 67 percent fall on the shoulders of trans women of color. And in nearly every study from HIV infection rates to socio-economic marginalization, in general, trans women of color are disproportionately affected.

When I was forced to stop looking at my identities as if they exist in a vacuum, I realized that being a black trans woman is a major risk and accepting myself would be just the first battle with a society obsessed with compartmentalization.

When Leelah Alcorn’s suicide went viral at the tail-end of December 2014, it seemed like there would be some major shift in the transgender narrative. I saw the world stop and consider a trans person’s death on a more meaningful level.

I thought the world would take the severity of our experiences more seriously even if it meant that some of the nuance of that severity might be lost. The nuance that explains that we also experience so much marginalization and that trans women of color, particularly black trans women bear the brunt of the violence and discrimination. 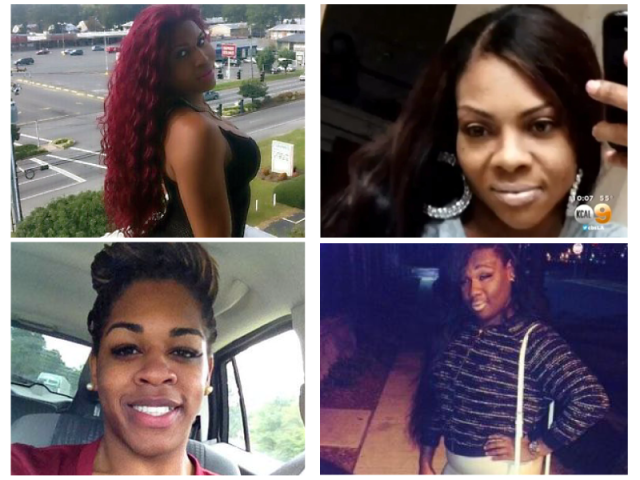 After a couple months into 2015, the media and society are back to their old means of understanding. We’ve already witnessed the murders of six trans women of color (including four black trans women) — Lamia Beard, Ty Underwood, Yazmin Vash Payne, Taja Gabrielle DeJesus, Penny Proud and Kristina Gomez Reinwald — and two more people who, based on reports, were gender non-conforming — L. Edwards and B. Golec. In Toronto, Somali-Canadian trans woman Sumaya Dalmara was found dead but police haven’t ruled her death a homicide. Their names have been discussed in articles and mentioned in newscasts, but largely mainstream media continues to reduce their deaths to numbers on a list.

This limited media presence revolves around paying tribute to lives that should’ve been respected long before they were lost through lackluster overtures about needing to respect and value trans lives. There continues to be no deeper consideration for the full lives of these slain individuals. They never fully delve into the “why” of their deaths.

There is much that can be said about the disparity between media coverage for young, white trans suicides and the brutal murders of the trans women of color. Are they not respectably queer enough to be hashtag worthy? Are their names not important enough in their respective racial communities to paint across banners? Perhaps they don’t fall in line with the perfect soundbite for your movement, but they should.

It is of the utmost importance to recognize the Leelah Alcorns and the Zander Mahaffeys and the Mike Browns and the Trayvon Martins, but we can’t shut down the conversation there and ignore the fact that there are numerous individuals like Islan Nettles and Nizah Morris being targeted as well.

Old Wounds in the Queer Community

If trans activists Marsha P. Johnson and Sylvia Rivera were to board a time machine and be transported to today, they would be proud of the strides we’ve made but balk at the idea that the queer community has fully embraced the trans unit of our acronym. Many of the same issues they faced before the Stonewall Riots have still not been rectified.

Both warned the influencers of the then Gay Liberation movement to be wary of bogarting the efforts from the trans and gender non-conforming individuals who led the initial resistance. Though Johnson and Rivera were adamant about liberation for all, we can’t ignore the roles their racial and class identities played in the immediate attempt to erase them from history.

When acknowledging that black trans women are routinely targeted for more strident discrimination, often the conversation is shut down in an #alllivesmatter attempt to push for solidarity. But true solidarity does not denounce diversity and individual voices. True solidarity actively engages them.

Yes, the LGBTQ community as a whole is fighting for many of the same goals, but structural racism, capitalism and respectability exist in every rank of the LGBTQ rights movement and cisnormativity continue to be upheld despite it plaguing us all. That means after 45 years of trying to catch up with the LGB movement, the trans community and black trans women are still catching their breath and wait for their reprieve.

Undoubtedly, we’ve made great strides in terms of visibility and awareness of trans issues. We’ve ushered in a trans renaissance in the media. More people are confronting our identity than ever before, but on the ground, life for the average transgender woman of color continues to be bleak.

Old Wounds in the Black Community

Similarly, the Black community has long ignored the issues of gender and sexuality. Many queer people of color have had their identities swept under the rug or been ousted from history books Bayard Rustin-style. Since the Civil Rights Movement, black women and black queer people have been pushed to the margins in an attempt to fight for what is deemed the greater mission: racial equality. But racial equality without nuance is centered on heterosexual black men. 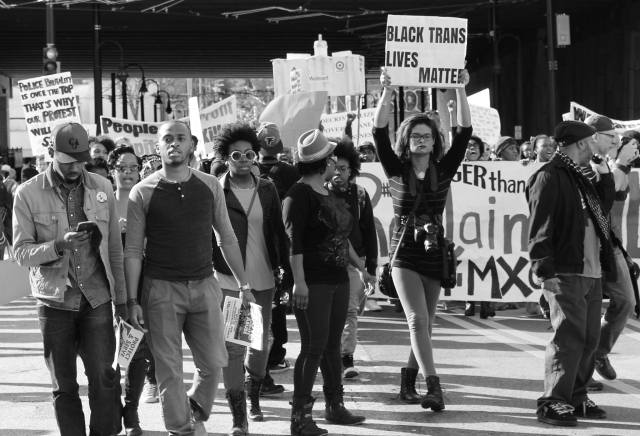 We see this in the #BlackLivesMatters movement which was started by three queer black women — Alicia Garza, Patrisse Cullors and Opal Tometi — not only in response to the murder of Trayvon Martin, but in response to the anti-blackness that affects all black lives. It has been stripped down of all contextual meaning.

The recent death of Ty Underwood attests to this mindset. The 24 year old was allegedly murdered by jilted love interest Carlton Ray Champion, Jr., a black man. In tried and true, transmisogynistic fashion, many in the black community on social media upheld that she must have been deceptive about her trans identity — as if that validates her death and despite the fact that there is text message evidence that proves otherwise.

Blaming trans women for having the audacity to desire love is a petty and disgusting act of self-righteousness. The atmosphere fostered through shaming trans individuals and those who love and affirm them makes it incredibly difficult to exist authentically. And, as we’ve seen with Underwood’s case, even when that status is worn on our sleeves, we are dismissed as not being authentic enough.

Living at the intersection of racial and gender minorities means that all of these identities are constantly working together. The queer and trans community can’t continue to strip us of our racial oppression, just like the black community can’t solely blame our deaths on our gender identities. We’re targeted for both. Identities aren’t like clothing; you can’t just put us in the trench coat you identify with, completely ignoring the even more complex underlying context.

My heart breaks any time I hear about a trans death, period. But when it’s another black trans sister dying, I cycle through feeling helpless, hopeless and numb. I see not just another death, but another voice lost. I think of these women and what they could’ve become if they were able to define their lives for themselves. If they weren’t eliminated in their prime and their humanity wasn’t permanently wiped away.

We have tangible proof that under the right conditions we can be New York Times bestselling authors, A-list actresses on major network television productions, tech guru entrepreneurs and more. But, let’s be clear, we shouldn’t have to be all of those things to be respected and valued. 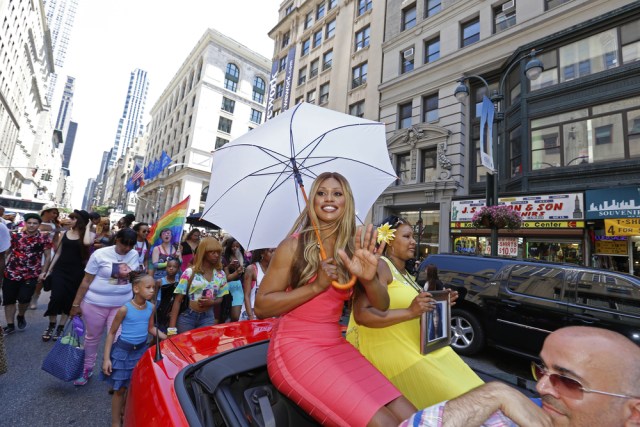 So often society at-large commandeers the message of Dr. Martin Luther King, Jr’s dream of racial and class equality or Harvey Milk’s view of a world where gay and lesbian individuals are less encumbered by the restrictions that society has placed on them, but we must dig deeper. We have to continue to shift our idea of what that end goal is. Now that the transgender community finally has a name and a face and stories that are burgeoning in literature and in cinema, we must critically consider what those narratives look like outside of fiction written by someone else.

In a truly evolved world, black trans women would be seen as more than the cisheteronormative scripts that society has grown accustomed to, we would no longer be targeted by transmisogynoir, proper healthcare and access to knowledgeable and affirming healthcare professionals would be a right, not a privilege, and the world at-large would be a safe space because restrooms and classrooms would no longer be political battlegrounds. We would also be able to keep our default institutions — origin families and churches — and they would work in tandem with our found institutions — drag families, GSAs and organizations. We would be able to choose our educational environments with more attention to our actual realities than presumptions on our upbringing and the configurations of our bodies. We wouldn’t have enough fingers on our hands to name off trans media figures and living beyond their 20s would be the norm, not an anomaly. Ultimately, our safety and livelihood would be centered and not relegated to the margins.

The road to that world requires more of our society and those around us. We deserve more than mentions on social media and impromptu vigils. We need help. We need allies. We need our queer family to bolster us on their shoulders. We need our black family to regard us and respect us. We need cisgender women to advocate for us.

We aren’t the vessels of flesh that you continuously try to define for us. We aren’t the insults, the wrong pronouns and the slurs you hurl towards us. We aren’t our forgotten and spit-on legacy and our minced and parsed humanities. We aren’t our “inevitable” deaths. We deserve our blackness, our queerness and our womanhood. We deserve respect, love and our lives. Every black trans woman deserves more than her obituary.

Raquel is 23-year-old queer, black, trans woman from Georgia. She went to college at the University of Georgia in Athens and now lives in Atlanta. She studied magazine journalism and women's studies (go figure!) in undergrad and has been writing, editing and tirelessly consuming media since college. She's out in every way imaginable and just wants to share the millions of things that are constantly on her mind. She loves music, art and activism.

Raquel has written 3 articles for us.