Snuffleupaguses! (I just learned that the plural of “Snuffleupagus” is “Snuffleupaguses,” thanks to Laneia.) Thank you for your patience these last few weeks as I’ve been running behind with my Pretty Little Liars recaps. I am juggling one hundred things I love, and this thing I love the most is just taking longer than usual. But, here is good news: You’re getting this recap today, and a whole other one tonight, so hang onto your Risen Mittens!

Previously on Pretty Little Liars, Hanna ended up in jail with Alison, which wasn’t Ali’s fault, but Hanna’s jail face said that she did think it was Ali’s fault and also that Ali was going to pay. Emily felt bad for herding Ali into the Rosewood Police Department paddy wagon like some sheep after she found out Ali didn’t kill Mona, so Emily ran hither and yon to try to clear Ali’s name. The main thing she found was that Varjak likes pizza. Spencer kissed a bunch of monsters on the mouth. And Aria went full Nancy Drew and even dumped Ezra. 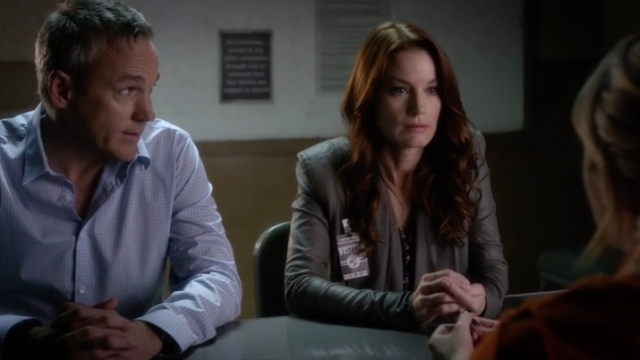 Veronica and I are still thinking of entering the Gayest Olympics. 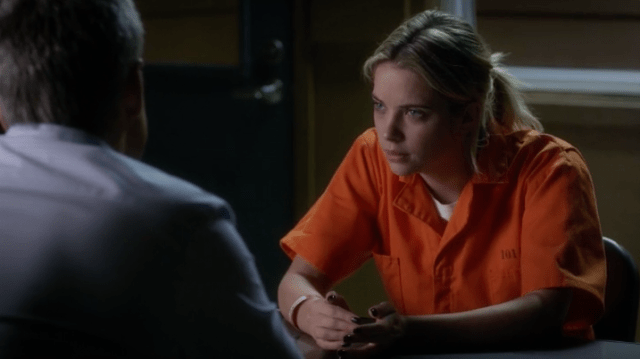 Mom, stop. I am getting out of here and Emily and I are going to win the gold medal.

Lawyer Julie meets with Ali and her Dad, who has finally arrived from Out of Town, to discuss Mona’s murder trial. Specifically, to look at a map of a courtroom in case Ali has never seen a TV show. Alison will be sitting right here and the prosecution will be sitting right there and the judge is over in that booth and the jury is in that box right there and Ali only has to convince one of them that she didn’t gut Mona and she’ll be free. If I’m Alison DiLaurentis and someone tells me I only have to persuade eight percent of people that a thing is true — seriously anything, if I’m Alison DiLaurentis — I’m betting seven hundred billion dollars on myself. Ali could set you on fire and sell you a box of matches while she was convincing you it was your fault you were in flames and also that it was the best thing to ever happen to you.

But for some reason, Ali isn’t happy with those odds.

In the next room over, Ashley and Ted (for some reason) are trying to get Hanna to narc on Alison for pretty much anything, even a not-true thing, if it keeps Hanna from staying in prison forever. Isn’t it kind of cool how the Liars’ parents keep trying to save them from jail by getting them to turn on each other, and the Liars are all like, “Only Liars decide when to turn on Liars!” It’s a friendship code. A weird one, but a true one, and I like it. 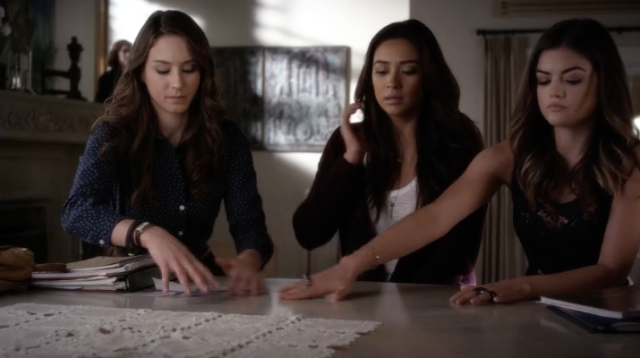 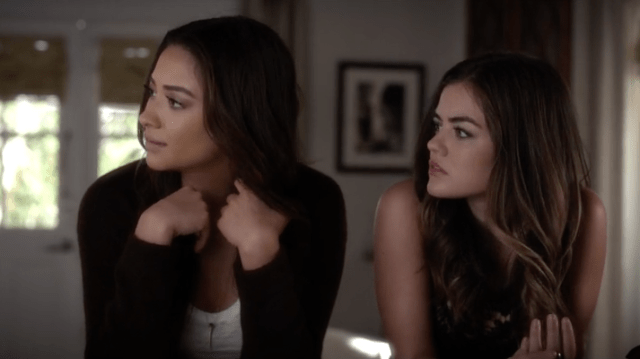 Did you kill Paige?

The Liars who are not in jail have gathered in Spencer’s kitchen to discuss the latest mysterious phone number that has made itself known to them. If you are like me, the first thing you thought was that they should call Tippi the Bird, Keeper of Digits and Dial Tones at Pennsylvania Database of Numerical Sorcery. And if you are like me, you will not be disappointed in 41 minutes. It turns out the phone number Varjak used for ordering pizza is the same number that was in the classified ads Ali was collecting and stashing in her room before Endless Labor Day. Veronica interrupts their investigative fun to tell Spencer she is absolutely banned from attending Alison’s trial, and she tells Emily and Aria that they should follow her advice also, since both of their parents are dead and no one is around to boss them or send them to England to keep them out of prison.

Emily makes a conciliatory face like, “I get where you’re coming from, but I’m going anyway.”

And Aria makes an I’m-so-sure face like, “I murdered a girl and tempt the rabies gods every day with my jewelry; I do what I want.” 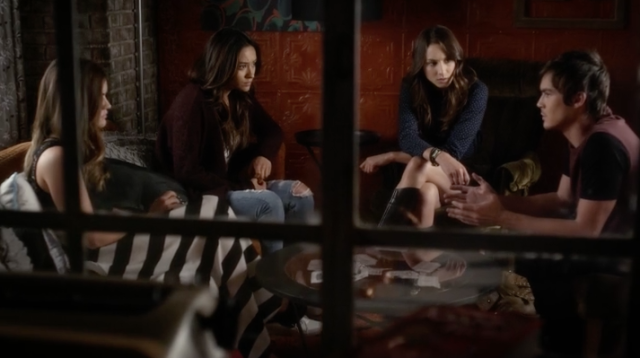 Spencer, this is an intervention. You are not the gayer than Emily. You need to stop.

The Liars take their investigation over to Fitzgerald Bookstore and Candy Shoppe so Veronica will leave them alone. Caleb is there and he has some news about the phone number: It is not traceable. So Spencer borrows one of his burner phones and sends a message from Holly Golightly talking about, “This is cat here, a no-name slob. Miss me? You know you wanna kiss me!” And then she runs outside to accost/apologize to Jason for convincing him that Alison murdered Mona and coaxing him to tell the police it was definitely Ali on that murder video from the air vents. Mr. DiLaurentis comes storming up out of nowhere and drags Jason to the car by his teen lifeguard heart throb hair and shoves him in the car.

Can you imagine how inadequate you would feel in life if Spencer Hastings was your one sister and Alison DiLaurentis was your other sister? You could be the kind of guy who could fall down an elevator shaft and survive and no one would even notice. 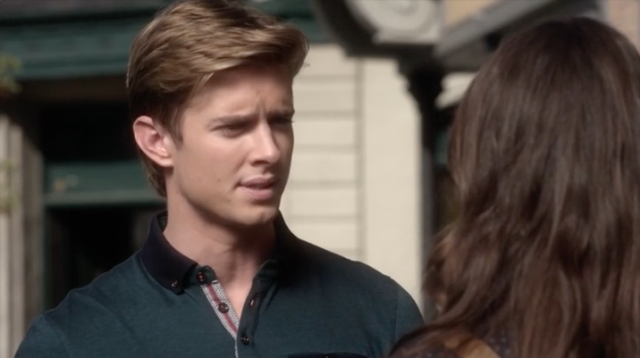 I got this new head so we’d have matching chins and this is how you repay me. 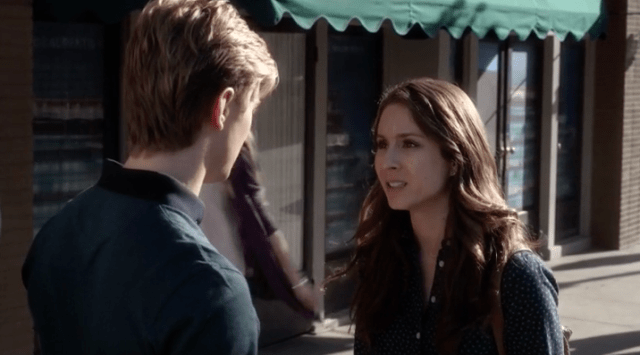 Oh god Toby’s chin matches mine too. Is HE Charles DiLaurentis? 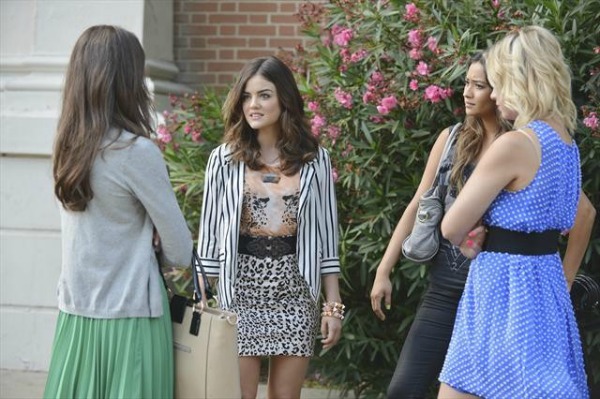 And what’s great is today’s theme is also cats! Aria is always the best when it’s cats, I guess! 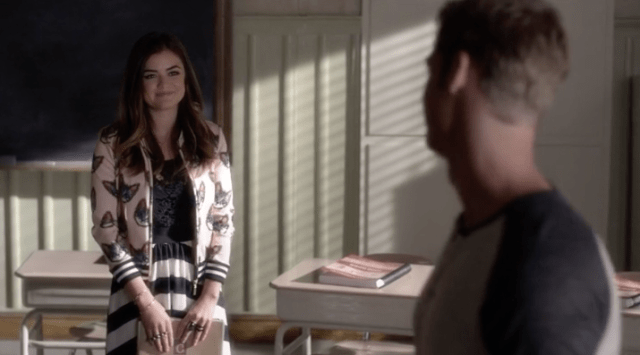 Okay, and get this shit right here from this little punk ass jerk.

Andrew: I’m super psyched for Mona’s murder trial today, babe. I love remembering that she’s dead.
Aria: Whaaaaat?
Andrew: Everybody acted like she was such a dang mental ninja just because she had natural adrenalized hyperreality and was never forced to overdose on Adderall to get straight A’s and exist in multiple dimensions at the same time.
Aria: That’s barely scratching the surface of what she was capable of doing, but okay.
Andrew: Oh, perfect. You think she should be sainted too.
Aria: I mean, she was the closest thing to a god we’ve ever had on this earth.
Andrew: Well, I hated her flawless guts. Want to make out?
Aria: Nope. 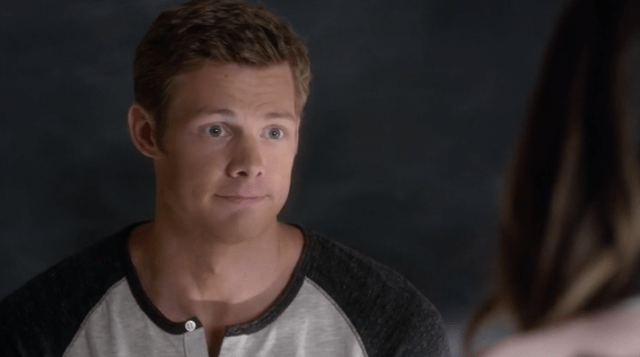 I didn’t not kill Mona, if that’s what you’re thinking. 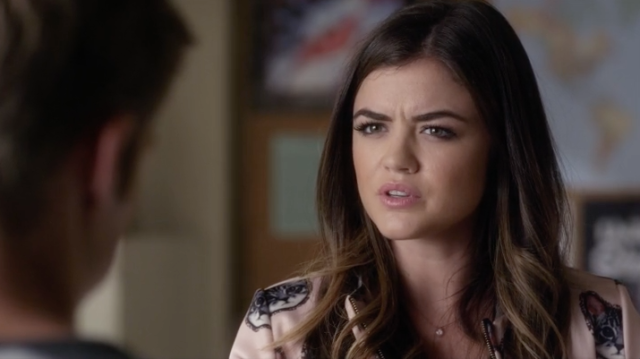 Are you actually a dummy, though?