Emily still hasn’t decided if she’s going to Ali’s trial or not when her phone rings and it is Ali calling from prison. Ali doesn’t play the sympathy card or the shame card or any of the cards in her deck of emotional manipulation. She just asks Emily to please come to her trial because she needs someone there who believes she’s not the worst person on the planet, and when Emily Fields is standing beside you radiating belief in your goodness, none of the horribleness of other people’s judgment can even touch you. Her light is a shield for your weary, broken soul! I mean, that’s the truth. I wonder if Ali will ever have the courage to actually say that to Emily. Right now she just asks for Emily to show up at the trial and Emily promises she will. 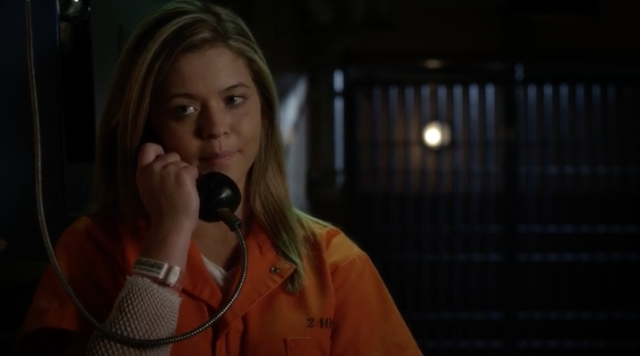 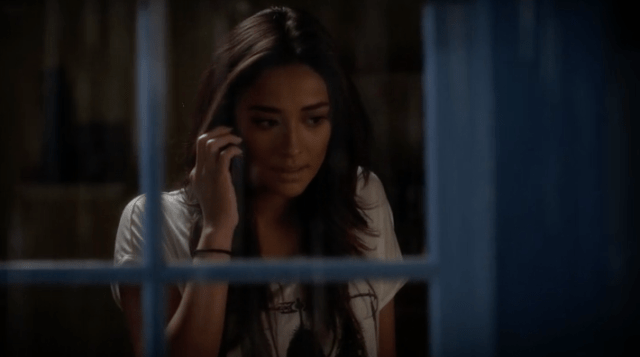 Yeah, but she can’t handle this.

The whole town shows up for Ali’s trial, even Mindy and Cindy, who are keeping it 100 with their Princess Diaries makeovers. After everyone is seated including all the jury and the judge and Alison is wearing her best freaked out kitten face, Aria and Emily make their entrance. These girls! Emily’s courtroom outfits are some of her very best outfits. Like even Bette Porter thinks Emily is wearing these suits. 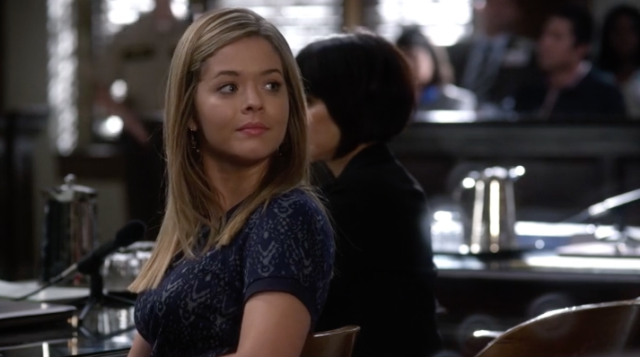 But, soft! what light through yonder window breaks? It is the east, and Emily is the sun! 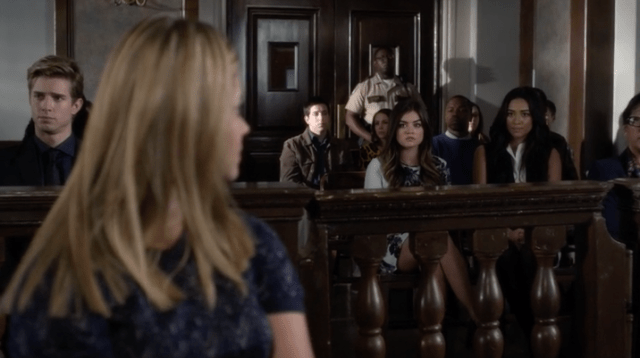 Can you believe it’s taken us this long to get inside a Rosewood court? How many people have been arrested for murder since this show started? Thirty, at least.

So the prosecutor weaves a yarn about how Alison DiLaurentis is a pathological liar who faked her own kidnapping and murdered Mona to keep her from diming Ali out, only half of which is true. He’s like, “Look at her. Look at Alison DiLaurentis. She’s pretty, oh yes. And little, too. But mostly she’s a Liar. A Pretty Little Liar.” The jury gasps. What a thing to say! Oh, and also the prosecutor points out Emily and Aria, which isn’t hard because they’re stumbling all over everyone trying to find a seat while he’s making his opening arguments. He says they’re her co-conspirators. 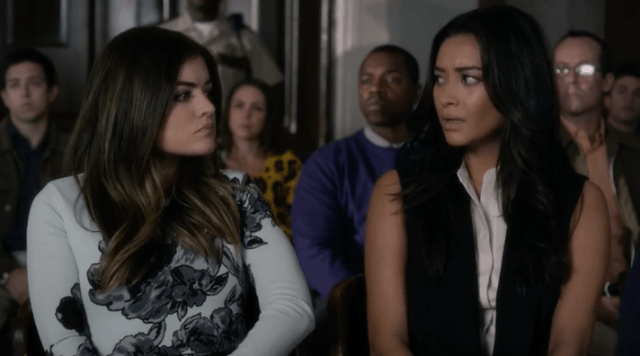 Do you think Julie is still dating Russ?

During halftime, Aria rushes outside and calls up bae to say that Cyrus spilled the kidnapping beans and now they’re all practically on trial, but Spencer can’t hear Aria over the sound of Mr. DiLaurentis having a fit in the background. He screams at Aria and Emily about how all this is their fault and he takes no responsibility whatsoever, right, and never mind that he was nowhere to be seen when: a) his son was perving on his sister with a video camera for years, or b) his son’s best friend was making homemade porn with Ali out at the kissing rock, or c) his wife was burying her daughter alive in their own backgoddamnyard, or d) Ali was getting strangled repeatedly in the living room, or e) all the days when Alison has been in jail for a murder she did not commit. And if that ain’t the most rich straight white guy thing you’ve ever seen, I don’t even know. “Everything that is wrong has nothing to do with me, the only person with power in this situation, and everything to do with these teenage hellbeasts with their tits and fannies!” 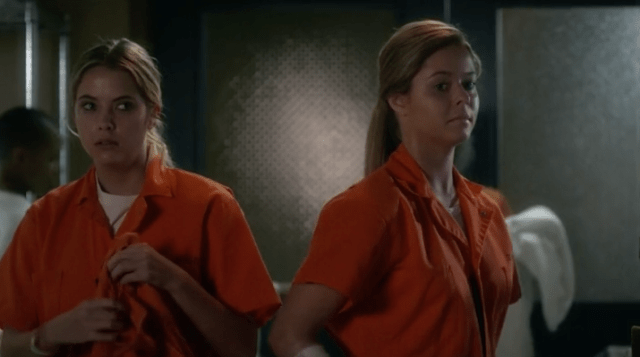 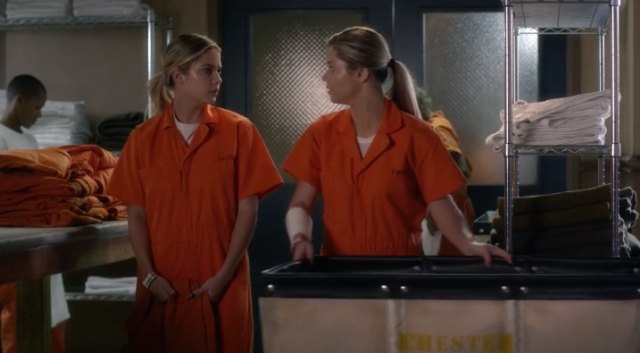 Excuse me, she’s waiting for me to get out of jail. 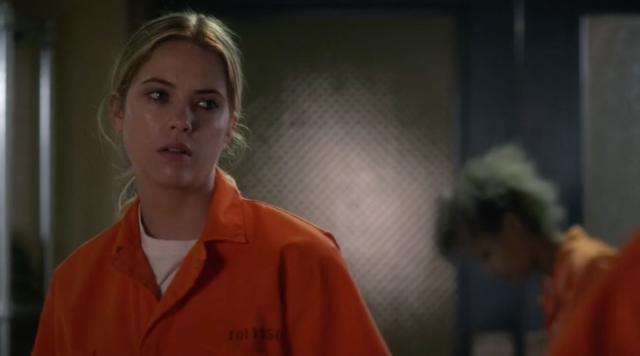 How many girls have bought you PinkDrinks? None? That’s what I thought.

Hanna: What about all those ads you cut out of the newspaper?
Ali: Someone was tormenting me by posting Goodnight Moon quotes.
Hanna: What?
Ali: It’s the book my mom used to read to me. Someone was trolling me about my dead mom.
Hanna: Ali, everyone’s parents read them Goodnight Moon.
Ali: Oh.
Hanna: Oh my Vanderjesus, Ali, have you been Beautiful Mind-ing us for like five years? Are you even operating in reality? I am now remembering two times that you were so sure you were being stalked that you set up elaborate scenarios where people would see you fake being stalked so they would believe you were being stalked. Did you make Mona like the Joker made Batman so you’d have an arch-nemesis? Am I going crazy now?
Ali: You’re just as sane as I am.
Hanna: God’s balls.