Paul Clement, the lawyer that the Republicans in the House of Representatives hired to continue defending DOMA even after one of its sections was declared unconstitutional by the Department of Justice, has never been particularly creative. The brief that he and John Boehner filed back in 2011 on the Edie Windsor case is a good example of what he’s brought to the DOMA issue so far. It contains arguments everyone has already heard: anti-gay discrimination isn’t important enough to warrant heightened judicial scrutiny; gays make bad parents; sexual orientation isn’t fixed  or inherent and is therefore invalid; homophobia just isn’t really that big a deal anymore because I mean, have you seen Will and Grace? In short, Clement hasn’t been able to bring anything new to the table as a lawyer representing the anti-gay side, and has mostly relied on the same old arguments that have failed to stand up to a judge or a test of basic logic. That is, until now.

This week, Clement stated that marriage needs to be legally limited to the union between one man and one woman because gays are in fact more responsible parents than straights, who can “produce unplanned and unintended offspring.” In fact, he went so far as to describe unmarried straight couples as a “very real threat” to American society. Charles Cooper, who you may remember fondly from the Prop 8 trials, added that “It is plainly reasonable for California to maintain a unique institution [referring to marriage] to address the unique challenges posed by the unique procreative potential of sexual relationships between men and women.” 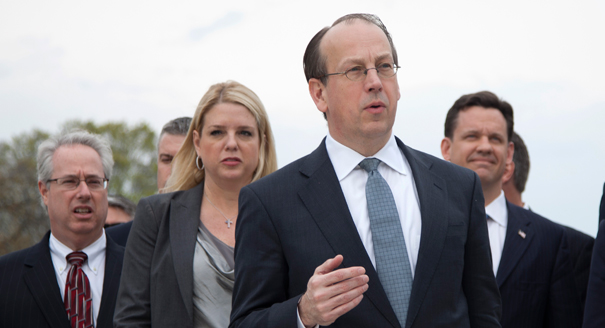 In a shocking turn of events, there’s nothing homophobic about the anti-equality side’s argument, if only because it’s an argument that doesn’t address or include gay people at all. While not homophobic, the argument is totally speculative; it doesn’t rely on any research or data that confirms its fears about unmarried straight couples are in fact harmful to anyone. This might be in part because Clement himself, in the same 2011 brief, once critiqued his opponent’s claim that gay parents are just as good as straight parents by writing “Plaintiff’s claim of a clear expert consensus is overstated. Indeed, the evidence relied upon by Plaintiff’s own expert demonstrates that studies comparing gay or lesbian parents to heterosexual parents have serious flaws.” So Clement’s bizarre critique of straight parents (and reminder that straight people could accidentally become parents at any moment!) can’t be based on actual studies, and has to instead be based on the unpredictable possibilities of heterosexual sex. In contrast, the fact that same-sex couples can’t have procreative sex is somehow no longer a mark that we’re marked unfit for families by God, but a marker of being prudent and responsible; we need “substantial advance planning” to have families.

There are plenty of flaws with this plan, most notably that while (within its own system of logic) Clement’s argument calls for straight marriage, it fails to explain why marriage needs to then be limited to straight people. Even if straight people do “need” marriage, it doesn’t follow that gay people who want marriage should then be denied it. It also relies upon the assumption that children are necessarily better off with married parents, so much so that people who could potentially have children should get married as a safeguard against it, as well as ignoring the children that are born of sexual contact that doesn’t occur within a relationship. Perhaps most obviously, it’s a dramatic reversal of everything conservative defenders of “traditional marriage” have believed for decades, although no new information is cited in the change of opinion. Essentially, it’s a pretty ludicrous argument to make.

But as ludicrous as it is, it has one important thing going for it — it’s totally new, and hasn’t been seen in the hallowed halls of anti-gay argumentation before. This doesn’t mean it will be effective, necessarily, but it does mean that Clement – and perhaps others – have realized that the old arguments will be totally ineffective. The conservatives have lost faith in their ability to win with spurious anti-gay claims; even the nuttiest of nutjobs can no longer convince themselves that telling a judge that gay moms are evil, or that gay people aren’t really gay, will work. Which is a pretty amazing victory, and which means that we have reason to hope for real victory on DOMA.