For weeks now, tabloids have been buzzing that some sort of relationship had begun brewing between rich daughter/model/something-or-other Paris Jackson, 19, and noted author/model/actress Cara Delevingne, 25. The pair met last May at the MTV Movie Awards and apparently struck up some kind of friendship. Tongues began wagging after the pair were spotted leaving an event holding hands this past December. In the world of celebrity tabloid journalism, this is as clear a signal as you can get; it’s a slippery slope from hand-holding to downright canoodling. These two lovable gal pals have not directly addressed rumors that they might be dating, but they were caught acting suspiciously like a very affectionate couple in a creepy paparazzi video we will not post here for ethical reasons. In lieu of that, here is an artist’s rendering of some key moments: 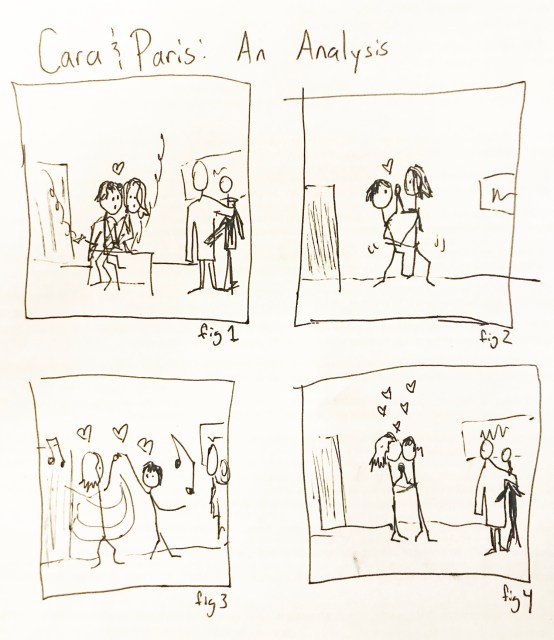 In the video, as the pair wait outside for a table at an Argentinian restaurant they are about to peruse with Paris’ godfather Macaulay Culkin and his girlfriend Brenda Song. Cara sits in Paris’ lap as they smoke cigarettes and appear very happy. Later, they awkwardly/adorably slow dance and twirl each other; Cara even kneels on the ground so Paris can dance around her. At one point, Paris gives her an affectionate kiss on the mouth. They appear to grin at each other with the unmistakably giddy, glassy-eyed stare of early-stage infatuation.. or friendship? “They have a flirty friendship but aren’t dating or in a relationship,” a reliable source told People. “Paris is 19 years old and living her life. She has no plans to settle down any time soon.” Not for nothing, reliable source, but I don’t kiss my friends this way, not with that goofy smile (and if I do, it usually necessitates a discussion). According to celebrated body language expert Stef Schwartz, “These two are TOTALLY DOIN’ IT.”

Please just let me have this one thing.

Last week, Delevingne and Jackson shocked the world by posting a series of Instagram stories detailing an evening spent eating strawberries and watching Carol together in bed, which is honestly the gayest thing I can imagine two people doing.

One of the most fascinating aspects of any speculative celebrity relationship is the urgency tabloid publications feel to create drama surrounding them, based largely on anonymous sources with an insider’s view. Radar in particular have posted often about how upset Paris’ grandparents Katherine and Joe Jackson are said to be about her (hypothetical) affair with Cara, but this week they insist that Paris has been soliciting her dear aunts Janet and LaToya to advocate on her behalf. “Paris Jackson Begs Janet To Convince Grandparents To Accept Lover Cara Delevingne,” the headline screams. I feel like this family has seen worse, but what do I know? I hope all the Jacksons are on board for this definitely-maybe-happening romance.

Delevingne was previously linked to ethereal wood nymph Annie Clark, and Jackson previously dated a guy who thought a Confederate flag tattoo was a cool idea. We here at Vapid Fluff HQ think this pairing is a much more sensible match.