Rumours have been flying for weeks now, but our reliable tabloid friends The Daily Mail UK and The Metro report that famous attractive person Cara Delevingne was spotted playing a spirited round of tonsil hockey with our favourite Grammy award-winning fantasy girlfriend, Annie Clark (née St. Vincent). The kiss that launched a thousand ships took place at a Universal Music afterparty for the Brit awards, where Delevingne had been a presenter and Clark lost some sort of “best international female” award to Taylor Swift, International Female. 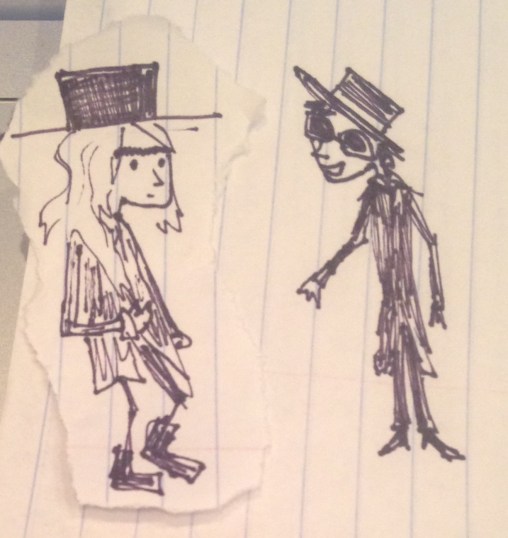 Instead of paparazzi shots, please enjoy this artist’s rendering of what these two goodlooking humans look like next to each other.

According to eyewitnesses, the pair “made no effort” to hide their passionate embrace, as though this was a thing that they should have made an effort to hide? Being a celebrity sounds so weird. Anyway, tabloids claim that these two lil’ heartbreakers have been kissing each other for about four months now, and that anthropomorphic pair of eyebrows Cara has met Annie’s parents. The Metro even reports that Cara has gotten a little tattoo of the initials “AC,” which could stand for AC Slater or Atlantic City but could also stand for Annie Clark. On Monday afternoon, the pair were spotted walking around lower Manhattan, probably looking for the Whole Foods that Ellen Page and her mystery blonde shop at.

For those of you updating your Alice Pieszecki-style charts at home, this is the same Cara Delehooha who delighted fans everywhere by attending a basketball game with a very drunk and rowdy Michelle Rodriguez. Following their breakup, Rodriguez went on to have a very romantic love affair with Zac Efron. As far as we know, Annie used to stand awfully close to Carrie Brownstein in a lot of pictures. These days, Brownstein is standing next to Orange Is The New Black‘s Taylor Schilling in photos.

This (adorable) pairing raises many questions for Gothip Girl:

As always, we will keep you posted as this story continues to unfold.