Remember when retired tennis player Margaret Court was like tennis is full of lesbians? I, for one, remember hearing that quote and thinking about all the secret lesbian drama that infiltrated my tennis team in high school. That drama — plot twist! — barely even involved me because I was so deeply closeted at the time. Still, I can verify that tennis is most certainly a gay sport. But you know what sport doesn’t get nearly enough recognition as a gay sport? CURLING.

Despite many attempts to play sports in my youth, I usually ended up quitting once I realized I would never be even close to as good as my sister at them. This included swimming, basketball, and one disastrous season of field hockey. But thanks to her devotion to every other sport in the world, my sister never really honed her tennis skills (we both started playing very young, and our parents actually met because of tennis). So I stayed superior, and I was perfectly content being a one-sport gal, playing varsity tennis all through high school and existing just on the periphery of all the lesbian tennis drama swirling around me.

Then, the 2010 Winter Olympics happened, and I fell in love with a new sport: curling.

Prior to then, I had never heard of curling. I lived in Virginia, where winter sports were scarce. Most of my friends preferred the summer Olympics, but I grew up living down the street from my Norwegian grandmother who has a tendency to get very Norwegian during the winter games, so I loved to watch the skiing, speed skating, figure skating, and other events that we only got to enjoy on TV seemingly once every four years. I even developed an obsession with Tara Lipinski when I was very young and owned the Tara Lipinski Barbie, which I would make dance with other Barbies rather than Ken. I’m still waiting for the day same-sex couples can figure skate together!!!!!

But the 2010 Winter Olympics stood out from all the rest, because it brought me to curling. Curling started as merely an exhibition sport at the Olympics in 1924 and didn’t achieve official medal status until 2006. But it didn’t catch my attention when it debuted as an official Olympic sport in 2006… mainly because my parents hadn’t yet bought a TiVo, the magical piece of technology that made it possible for my sister and I to catch way more Olympic events than ever before.

Someone accidentally taped a curling match, and the rest was history. I was beguiled by this strange sport of stones and brooms that somehow seemed ancient and futuristic — like something played aboard the U.S.S. Enterprise — all at once. No one around me seemed to understand curling, and that made me love it more. I suddenly became committed to learning the rules, to understanding the game that so many disparaged as “not a real sport.” Curling, like myself, was soOoOo misunderstood.

Plus, that was the year the Norwegian men’s curling team sported these incredible argyle pants: 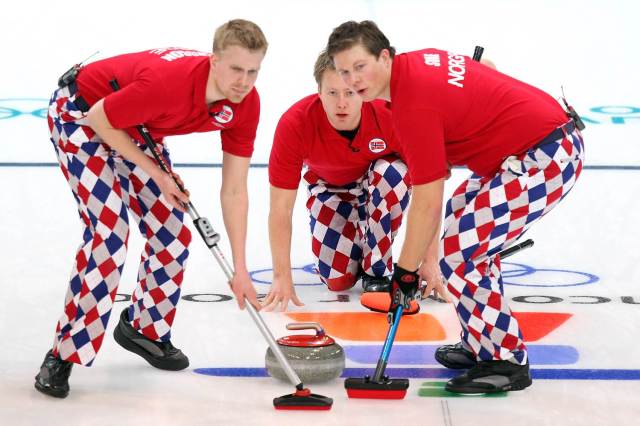 A sport that utilized fashion much more appealing to me than the frilly costumes of figure skating? Yes, please!

In high school, I tried on new interests and obsessions in wild succession, hoping the things I liked would help me define who I was. Curling was the latest obsession, and I loved that it was mine, all mine! No one else at my small performing arts high school in southern Virginia was talking about curling! But now they were, because I was pretty much forcing them to. I ordered a t-shirt online that said “rock on!” with a picture of a curling stone. I started telling people I had dreams of being a professional curler one day. There were, of course, few opportunities to act on that dream in Virginia. The closest ice rink that offered curling lessons was two hours to the north, just outside of D.C. I vowed to visit.

Instead, something better happened. Shortly after the Olympics ended, my uncle in Vermont heard about an amateur curling competition happening for charity in his town. By this point, everyone in my family was clued into my peculiar obsession with the sport. Not long after, I was flying to Vermont for my first curling competition without ever having touched a curling stone in my entire life.

Our team was named Broom Broom Pow, suggested by me because, yes, it was 2010 and “Boom Boom Pow” by The Black Eyed Peas was still on the radio. I made hideous iron-on team shirts for me, my uncle, his friend who he had roped into this adventure, and one of my close childhood friends, a University of Vermont student at the time who I called up and said “hey, you’re joining my curling team.” 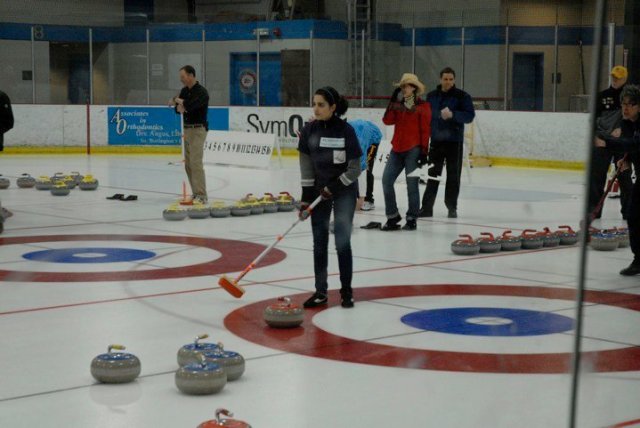 Experience supposedly wasn’t required for the event, and we signed up for the optional practice session the night before our first game so we could see what exactly we had gotten ourselves into. I already knew all the rules, so I gave my teammates the pointers I’d picked up from watching. Only, I wasn’t just passively watching anymore. This was real. I was curling!

Everyone who has ever said that curling isn’t a real sport should be required to try curling. Those stones weigh over 40 pounds and are tricky to maneuver across the delicate ice. Lunging across the ice requires significant balance and core strength. THE SWEEPING IS INTENSE, Y’ALL. Our coach went over the ABCs of curling: alignment, balance, and curl. My friend’s years of playing strategy games came in handy, so we made him our skip, essentially the team captain who calls all the shots in curling. 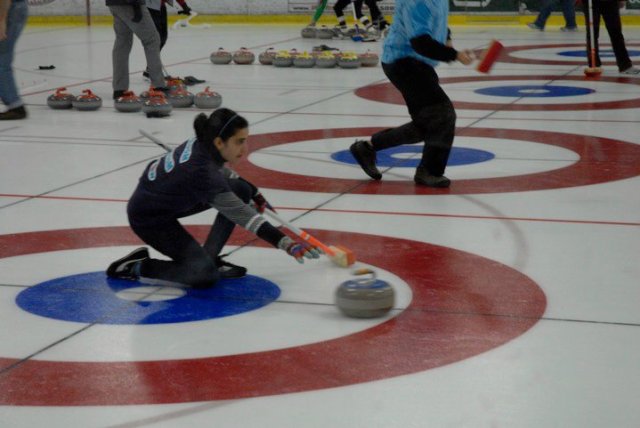 Somehow, we won our first three games. That placed us in the finals, where we faced off against the Chocolate Sliders… a team of chocolatiers from a local chocolate factory!!!! Who had a lot of experience with curling!!!!!! The stakes were suddenly incredibly high. We were the dark horse, a team of curling newbies who were secretly really fucking good at curling? As an extremely competitive person, I was very pleased.

We didn’t end up beating the Chocolate Sliders, but how could we have? They were curling chocolatiers! They were destined to win! And we were destined to take home our silver medals, which were presented to us in a formal curling awards ceremony — bagpipes and all. My requests for “Boom Boom Pow” to be played on said bagpipes were denied.

Then Broom Broom Pow went our separate ways. I went off to college. My weekend of curling became little more than a fun anecdote, my silver medal gathering dust somewhere in my parents’ home next to a massive pile of all the medals my sister won for various sports through the years. The 2014 Winter Olympics came and went. I watched the curling and told my friends I’d done that once, talking about it with a distant reverence as if I had truly missed my shot at going pro and it wasn’t merely a weekend of accidental glory.

Broom Broom Pow remained dormant for eight long years. Until now. Halfway through the 2018 Winter Olympics, my uncle called me up. “Should we get the team back together again?” It was time for a curling reunion.

Many things were different this time around. We all had iPhones now. The Black Eyed Peas hadn’t been on the radio in a very long time. The U.S. Olympic curling team was suddenly really good. I had a girlfriend, and my family actually knew about it. In fact, she stepped in and joined the team since my childhood friend was no longer in Vermont. Suddenly, Broom Broom Pow got a whole lot gayer. 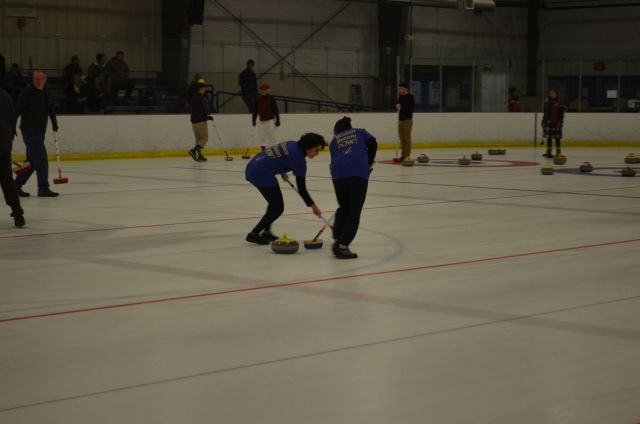 Something else was different this time around: In 2010, we came to curl. In 2018, we came to win. We were so certain that we could recreate our former glory and maybe even redeem ourselves by winning gold. Naturally, we bombed. We couldn’t get a good read on the ice (that’s a thing!), and we kept delivering stones with either too much or too little power. Nothing was working. In the course of three games, we scored exactly one point, and you don’t have to know too much about curling to know that’s bad. In fact, out of over 30 teams, we came in last place.

About halfway through our final game of the tournament, when it was already more than clear that we would not be advancing, time froze for a moment as Will.I.Am’s heavily affected voice crept onto the speakers. My mother, one of the many family members who had turned out to root for us, had requested “Boom Boom Pow.” Our spirits were suddenly lifted, which is not the vibe that terrible song should ever inspire, and YET! 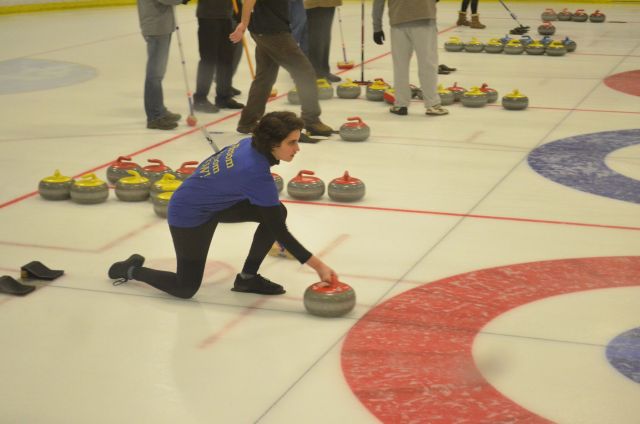 8 years later, my concentration face has not changed

Minutes before, I had accidentally snapped at my girlfriend when she told me to relax and have fun. Sure, this was all fun and games, but I still wanted to win! But for all the yelling at stones that goes on, curling is, at its core, a convivial game. You’re supposed to say “good curling” to each opponent at the top of a game, and even though the tension can build on the ice during the game, in the end, you say “good curling,” too. A game where you have to be nice to your sworn ice enemies? Honey, that’s queer culture. So is participating in something elaborate that most people don’t understand. Curling is an incredibly kind sport. No matter what, it’s always “good curling.” But it’s also one where people passionately shout commands at rocks.

A week after the competition, we all received an email congratulating Broom Broom Pow. At first, I thought it was a cruel error. But nope, we were being congratulated because even though we lost every game we played, we had won best team spirit thanks to our very boisterous, sign-wielding fans in the stands. Hey, best team spirit is the gayest accolade there is in sports, so I’ll take it! 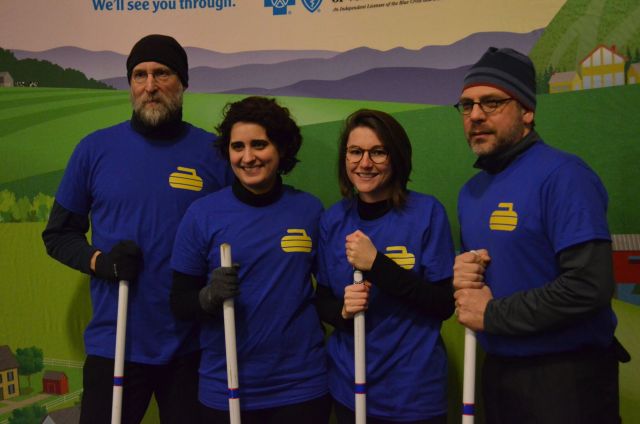 Broom Broom Pow 2.0, the team with the least points but the most spirit

For now, I am once again retired from the sport of curling. But I’m not ruling out the possibility of a second reunion in the distant future. I can only resist the pull of the stone for so long! Now, please spread the word: Curling is queer.