With Ode to My Pantry, learn to navigate a grocery store and a new cuisine without having a meltdown in the “ethnic” food aisle. Give a man a fish and feed him for a day, teach a queer to cook with Katrina and stave off malnutrition for another semester. 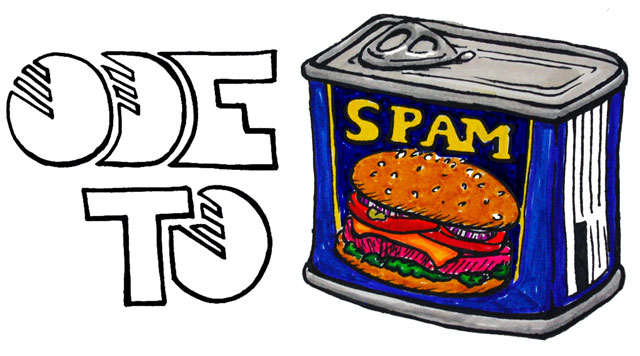 Spam: it’s good. Well, also, it’s bad. Or, actually, it’s complicated, especially if you think about it a lot like I do. Like technology, superpowers, and human nature, Spam is neither inherently good nor bad, but it comes with a lot of connotations. Prompted by a modest debate a few weeks ago on Slate, I spent some time obsessively researching the history of the canned meat, which played a pretty substantial role in the food pyramid of my childhood. It turns out that I’m not alone in my fixation and enthusiasm, which made me feel that you might be interested too. This is kind of like when I get drunk and lecture about Filipino history, except that I’m sober right now, and maybe you are too. The following is what I found, starting with some facts and followed by some speculations, feelings, and finally, recipes. 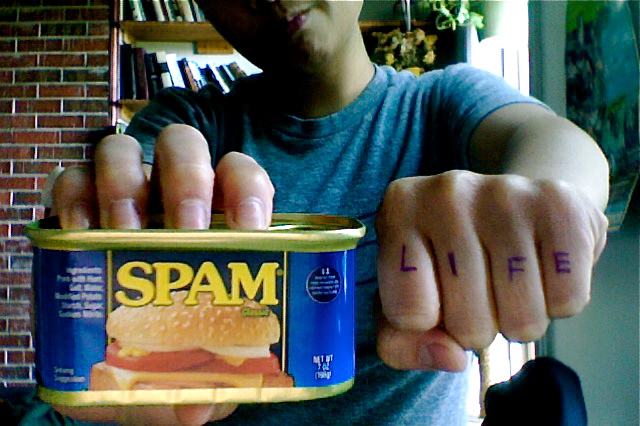 i am totally fucking serious about this

Spam has enjoyed a long legacy in America and abroad, even if that legacy hasn’t necessarily enjoyed Spam back. It was introduced into supermarkets in 1937, toward the end of that whole big Great Depression thing. It was a fitting time, as no one had any money but still needed to eat, and if possible, they wanted to eat something that they could trust. Spam was originally intended to be that thing they could trust, presented to American consumers as a less questionable canned meat alternative; while most of its competitors were using lips, snouts, and various unnamed cartilaginous bits, Spam utilized the most food-like parts of the pig: the leg (ham) and the shoulder. In fact, it’s even been rumored that Spam derived its name from said ingredients, (S)houlder (P)ork and h(AM). Could they have done a better job with naming this? Maybe. But Vienna sausages were invented by a guy from Frankfurt, and hot dogs are just not made of dogs, so who are we to judge, right?

Our canned friend increased in circulation during World War II, when it was distributed to American GIs stationed in the Pacific Islands. Spam was the obvious choice for this mission. In addition to being highly transportable and easily preserved, Spam is also pre-cooked and extremely filling.

Objectively, Spam is pretty bad straight out of the can, though I suppose that is an option, if you must. But somewhere down the line, someone learned how to cook it, like actually  cook it ( and let’s be real, they were probably someone’s military wife). In countries like South Korea, whose economy had been destroyed by warfare and whose land was being occupied by American soldiers, Spam was like, the shit. While some rejected Spam for its mysterious pink nature, others recognized its flavors (mostly salt) and its culinary potential (endless), pairing it with local ingredients that actually complimented the mass-produced meat product. These traditions have continued in many of these regions, most notably with a Spam Jam competition in Hawaii, a Spam Jam restaurant chain in the Philippines, and Spam-centric menus in Hawaiian McDonalds.

The Bad
Ok, so there are some things we cannot deny. Spam was born out of the worst economic conditions that the United States has ever faced and gained mass popularity by being distributed to American soldiers stationed in Asian and Pacific islands, locations that would feel the devastating effects of this war for over half a century to come. Not a great track record. 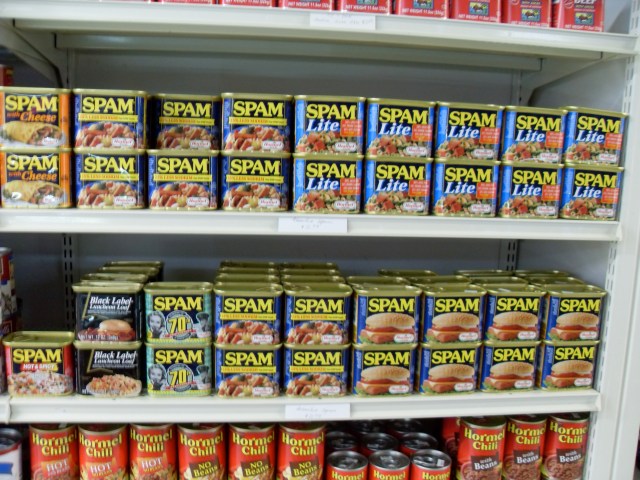 Hormel also doesn’t have the best reputation when it comes to treatment of animals, but this is big meat in America. Everything is fucked up if you have even the least bit of a critical lens or moral consciousness. It’s in what you eat, it’s in what you consume. If you shop at WalMart, Urban Outfitters, and Target, if you have it your way at Burger King, if you’re a quinoa junkie or you assuage your meat-guilt with soy, let’s be real, something, somebody, somewhere is being abused, exploited, destroyed, or made into a hamburger. There may be legitimate reasons to dismiss Spam, to dismiss it upon its moral value as if it was singular in this aspect is just sort of narrow.

What about its aesthetic value? Those who quickly deem it “gross” often ignore the fact that food taboos come from a highly subjective and often contentious place. Is Spam gross because poor people eat it? Is it gross because people who don’t look like you eat it? Is it gross because you’ve never tasted it? These foods were shipped out from America into the Pacific, where they were received and interpreted in ways that couldn’t have been imagined on the mainland, and eventually they became parts of culture. If you must shame some aspect of Spam, don’t shame the meat itself or the thousands (millions?) who love it, be critical of the culture that produced it. That culture may just be your own.

Spam may be “gross” because it has no significant nutritional value. And that’s fine, but there’s a time and a place for every food, and chances are that even if you like Spam a whole lot, you’re probably not eating it every day. It’s not a gateway drug like that.

Sometimes you can’t help but love the things you grew up with. For me, Spam feels like Sunday mornings, the only breakfast of the week that I actually sat down for. It reminds me of coffee before I even liked coffee (pouring a cup for aesthetic value) and learning how to appreciate fried eggs (cooked over-easy with the yolk leaked out over white rice). Coming from a culinary culture that puts chopped-up hot dogs in sweet spaghetti, fried canned corned beef hash into rice, and has a ubiquitous presence of Vienna sausages, Spam seems like a shortcut back to the Philippines, the place where I’m from-from, right in my Brooklyn kitchen, feeding me on the cheap every once in a while. 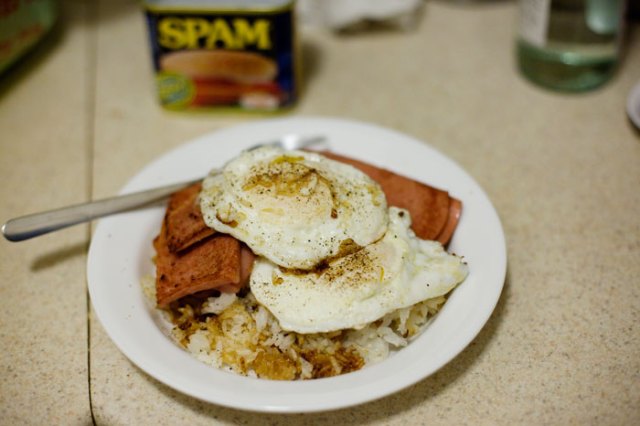 If you can’t get down with a big pink mass, you can’t hate on innovation and versatility. It’s quick, it’s cheap, and Spam doesn’t discriminate – it tastes good with the sweet, the savory, and the bland alike. It’s good to go for any meal. As my friend Charlotte, a California-born Vietnamese-American says, it’s “the maize of our people.”

And! If you’re looking for an opinion from someone who wasn’t indoctrinated at a young age, my girlfriend – who ate sauteed pig cartilage with me on our first date and was extremely receptive to bone marrow when out to lunch with my parents – initially refused to try Spam. When I cooked for this article and had her try a piece, she deemed it “not horrible.” So there we go. You gotta start somewhere, you know?

So on that note, let’s start somewhere. Here are two few quick, easy introductory recipes to Spam, as well as some suggestions for further exploration. 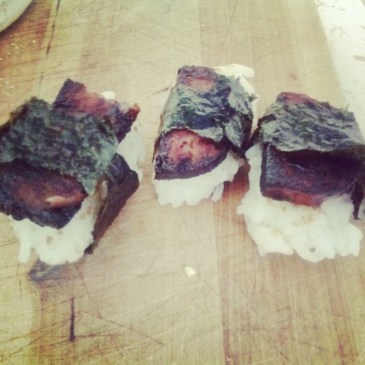 O-musubi is a Japanese food that’s made by surrounding a salty or sour ingredient (salmon, dried tuna, roe) with white rice and wrapping it in nori seaweed. Predictably, Spam musubi, which originated in Hawaii, takes this concept and replaces the traditional filling with – you guessed it – marinated Spam. I made them mini for no other reason than the fact I think it’s cute.

This was adapated from a few different recipes and works with Spam’s versatility. Spam has a reputation for playing well with others, including sweet and spicy tastes. It’s a sandwich, so this is really simple. 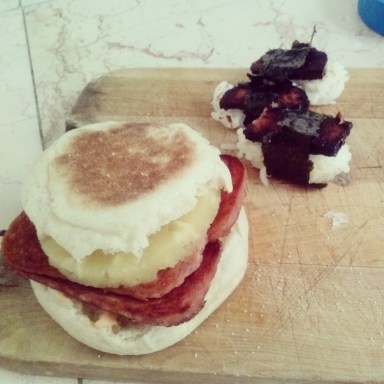 Pineapple slice (if canned, the juice can be used for the musubi marinade)

Sriracha (or any Thai chili sauce)

Other really amazing Spam dishes include Spam with garlic fried rice and egg, Spam fried rice with veggies, and pretty much anything that you would eat with bacon. The possibilities are basically endless. Are you convinced? If so, how do you Spam?