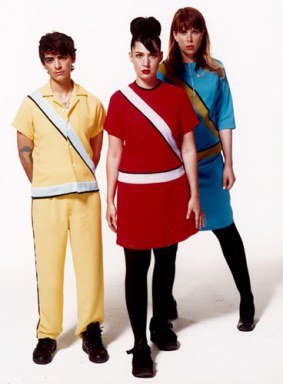 If you love music, Kathleen Hanna should be your hero. There is no compromise on this; she just IS.

In the new documentary “Who Took The Bomp?: Le Tigre On Tour,” the band’s 2004 tour supporting This Island is presented partially through fantastically edited live footage, but also through insightful interviews and hilarious backstage antics. I had the honor of attending a recent screening of the film at NYC’s MoMA and left feeling the same blinding musical enthusiasm I felt for bands I’d loved as a teenager.

The women in Le Tigre are all inspiring in different ways (obvs JD = Left Eye, Johanna = Chilli, Kathleen = T-Boz), but I was especially touched during interview segments where JD compares her difficulty accepting her body during adolescence to her sudden emergence as a sex symbol rockstar. You guys, I knew I loved MEN and Le Tigre but I seriously had no idea JD was so funny and precious. The band also discuss their difficulty in being an all-girl band, a feminist band, a queer band, and their struggle to be seen simply as musicians in a misogynistic, bro-metal-dominated music scene. Their obvious love for each other and their music is real and palpable throughout the film, and I was reminded of what it means to truly love a band with your entire heart. Le Tigre broke the mold and led the way for not only a new wave of electro-pop musicians, but also for 21st century feminists.

After the film ended, Kathleen Hanna and Johanna Fateman answered a brief Q&A, wherein they talked a bit about their current projects. Johanna is busy parenting, writing and operating a salon in New York called Seagull, and Kathleen has been working on the Riot Grrrl Archives (now available at the NYU Fales Library) and writing and recording with her new band the Julie Ruin. JD sadly wasn’t present, as she’s currently on tour with MEN.

Nothing I’ve seen since “The Runaways” has made me want to run home and pick up a guitar more, and this feeling was cemented when my friend and I got up to leave and ran smack into Joan Jett, who was apparently just hangin’ out in the audience the whole time. Oh hey.

“Who Took The Bomp?: Le Tigre On Tour” comes out on DVD June 7 on Adam Yauch’s Oscilloscope Laboratories. You should watch this clip of the band performing “Deceptacon.”