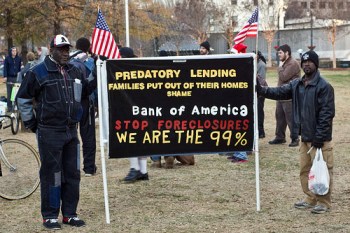 There are plenty of people who will criticize the Occupy movement for not enacting real or measurable change. But they might be interested to know that this week, Occupy Atlanta successfully helped a lesbian couple, one of whom is an Iraq War veteran, keep their home.

Earlier this month, Brigitte Walker learned that her home was facing foreclosure by her mortgage holder, JPMorgan Chase, and asked Occupy Atlanta for help. Occupy Atlanta began occupying Walker’s home on December 6th, with tents on her lawn as well as a sign on the front of the house reading “This house is occupied.”

Within the first week of occupation, JPMorgan began discussing modifying the terms of the loan with Walker and with activists. The changes became official on Thursday and will result “in hundreds per month in savings,” as Walker told the Huffington Post. She also said, “I strongly believe Occupy Atlanta accelerated the process and helped save my home. If it had not been for them standing up, I probably wouldn’t be having this happy ending.”

Before Occupy Atlanta camped out on her lawn, Walker had an eviction date of January 3. Now not only will she be able to keep her house, but Occupy Atlanta has made a huge difference for her entire neighborhood:

Within the past two weeks, activists repeatedly canvased the neighborhood’s more than 240 homes, helped identify 15 abandoned properties, conducted graffiti removal, and helped spur a neighborhood watch program. In one instance, the activists said they recovered stolen goods stored in one abandoned home. “We knew where to look,” Franzen says. “It was one of the homes we had cleaned up already.” They started an Occupy Riverdale and began holding general assembly meetings in Walker’s garage.

Walker, who lives with her partner, Ajai Craig, and their two children, purchased her house in 2004, when she was still on active duty and her salary covered the mortgage. Her tour in Iraq ended in May of that year, when shock from mortar rounds crushed her spine, damaging her nerves. She currently has a limited range of motion and post-traumatic stress disorder. In 2007, she expected to return to active duty, but was medically retired from the army against her wishes. She has been trying to negotiate the terms of her loan with JPMorgan since.

In an interview with Occupy Atlanta, Walker says,

“What caught my attention [with Occupy Atlanta] was when the gentleman said that Chase telling us that they’re not going to [foreclose] the home is not enough; we’re going to follow through right to the end, until the ink is dried on the paper. […] If you had told me three years ago that I’d be in this situation, I wouldn’t have believed you. I never thought my military career would be cut short like that. I was planning on doing 30 years. […] Everybody faces hardships, and I think people should not be judgmental of my situation, because we’re all one hardship away from being in my situation.”

Occupy Atlanta held two press conferences on Walker’s lawn, a national call-in day, and direct action on Chase Bank. It was only then that JPMorgan actually began to negotiate. Since being removed from Woodruff Park in late October, Occupy Atlanta has been assisting people who have homes facing foreclosure. Encouraging negotiations rather than foreclosures have also become one of the primary goals of the Occupy Our Homes movement, which demands that banks negotiate with homeowners instead of foreclosing on them.

On December 6, as part of a day of action protesting home foreclosures, Occupy Our Homes took over a foreclosed house in Brooklyn to help a family of four who had been kicked out. Occupy Atlanta also tried to save the home of a county police officer, which, though unsuccessful, raised awareness of other families in need. In Salon, Max Berger, an Occupy Our Homes organizer and a member of Occupy Wall Street’s movement-building working group, said, “This is a shift from protesting Wall Street fraud to taking action on behalf of people who were harmed by it. It brings the movement into the neighborhoods and gives people a sense of what’s really at stake.”

Since 2007, about 6 million homes have been foreclosed on, and another 4 million are currently estimated to be in the process of foreclosure. One of the main points of protest of the original Occupy Wall Street movement was predatory lending and the fact that when banks ran out of money, they were given more, whereas individuals weren’t given the same generosity — even when, like Brigitte Walker, they’ve already given a great deal to our country, in military service or other contributions. After the dispersal of most of the original occupation sites, like Wall Street, LA, and Oakland, there’s been some debate about where the members of the Occupy movement might go next in order to make the biggest impact. Occupy Atlanta seems to have come up with an answer for themselves, at least: they’re occupying their own community, and making sure that the people who live there are able to keep occupying their own homes. Seeing the Occupy movement shift to address a concretely defined issue with actions that can have tangible results is more than refreshing — it’s to be applauded.