It’s hot. Really hot. So maybe you would like to look at pictures of girls in water:

Or maybe you would like to get wet yourself: 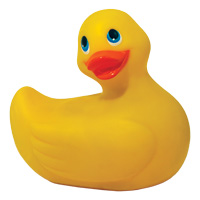 Babeland, Good Vibrations, and Come as You Are have a selection of water-proof sex toys. For vibrators, try the Jopen vanity Vr. 9 Vibe (read our review), the Splash, or the I Rub My Duckie, which looks like a rubber duck. There are also water-proof harnesses, including the Aslan Black Cat Harness and the Aslan Rubber Jock Style Harness.

Another bonus of water-proof sex toys:

Is that they are easy to clean. Make sure that sucker is tightly closed (if there are batteries) and wash it with hot soap and water for at least 15 seconds (dishwashing soap works well). If you’re sharing a toy, clean it after each person uses it (better yet: cover it with a condom, and change that too). Obviously this is impractical if you are sharing a harness or something, because it may or may not resemble a dying balloon animal afterwards. Find out what to do with toys made of specific materials over at Good Vibrations.

Depending on where you live, having sex in a public pool / lake / hot tub / ocean / other related body of water may be illegal, so keep it in your own backyard / bathtub / shower / sprinkler system. Other things to keep in mind include a higher risk of disease transmission, the irony of not being wet enough when you’re surrounded by water, and the possibility of starring in the most awkward reality television sex scene ever. It also puts you at risk for being yelled at by homophobic people, even when you’re just kissing.

The following collections of lesbian erotica. I don’t actually know whether they have anything to do with water, but they all have the word “wet” somewhere in the title, and the world needs a little bit more of that:

+ Wet: True Lesbian Sex Stories, edited by Nicole Foster, is “intense and vibrantly real lesbian erotica in the spirit of Skin Deep, these quick and dirty true stories revel in hot lesbian sex. As they peek into the diary of a very busy (and very bad) girl, readers will be panting hungrily as women from around the world reveal their most intimate lesbian encounters.”

+ Aqua Erotica, edited by Mary Anne Mohanraj, actually has everything to do with water, so much so that it’s actually water-proof. 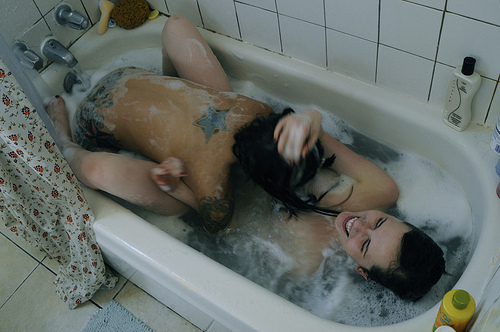 This has nothing to do with water but seeing your brain when you’re having sex is fun:

The wonder of “what a woman’s brain looks like during sex” is no more: because I have it compiled into an image for you.

60 years ago, scientists first discovered how the brain processed stimulation to specific areas on the body. But they discovered it for men, and it took all of the 60 years since to get equal and figure out what’s going on in women’s minds when we’re getting off.

The discovery is definitely late, but hey, it’s official now:

Using functional MRI, scientists created images of sensory responses in the brain while women stimulated their clitorises, vaginas, cervixes, and nipples. Oh, and just for fun, their thumbs and big toes.

They discovered that substantially different parts of the brain are activated when, for example, clitori were stimulated as opposed to the frontal vaginal wall. Lead researcher Barry R. Komisaruk told New Scientist that for an unspecified number of women, nipple stimulation led to genital activation. “When I tell my male neuroscientist colleagues about this, they say: ‘Wow, that’s an exception to the classical homunculus. But when I tell the women they say: ‘Well, yeah?'”

Here’s the map we’ve all been waiting for: