Happy Friday everyone! It’s been three days since we were freaking out and celebrating through the election and by now you’re no doubt aware of all the amazing things that happened for our various communities. Perhaps most notably, gay marriage is now legal in Maryland, Maine, and Washington, and not banned in Minnesota!

There are no bad things that can be said about these results. We’re getting closer to the rainbow light at the end of the tunnel! The Abominable Anti-Gay Marriage Juggernaut is being vanquished! Progress is being made! Everybody knows that, right? Well maybe not everybody. Take NOM President Brian Brown for example:

Obviously we are very disappointed in losing four tough election battles by narrow margins. We knew long ago that we faced a difficult political landscape with the four marriage battles occurring in four of the deepest-blue states in America. As our opponents built a huge financial advantage, the odds became even steeper. We ran strong campaigns and nearly prevailed in a very difficult environment, significantly out-performing the GOP ticket in every state.

Despite the fact that NOM was able to contribute a record amount to the campaigns (over $5.5 million), we were still heavily outspent, by a margin of at least four-to-one. We were fighting the entirety of the political establishment in most of the states, including sitting governors in three of the states who campaigned heavily for gay marriage. Our opponents and some in the media will attempt to portray the election results as a changing point in how Americans view gay marriage, but that is not the case. Americans remain strongly in favor of marriage as the union of one man and one woman. The election results reflect the political and funding advantages our opponents enjoyed in these very liberal states.

Though we are disappointed over these losses, we remain faithful to our mission and committed to the cause of preserving marriage as God designed it. Marriage is a true and just cause, and we will never abandon the field of battle just because we experienced a setback. There is much work to do, and we begin that process now.

Wait. Let’s pause for a moment and let his word sink in. Was he watching the same election I was? Brown made similarly ludicrous statements to other news agencies, my favourite being, “At the end of the day, we’re still at 32 victories. Just because two extreme blue states vote for gay marriage doesn’t mean the Supreme Court will create a constitutional right for it out of thin air.” I know Brown must be a bit out of touch with reality to lead NOM to begin with, but let’s approach his statements in post-election hangover mode and fact-check that shit.

First up, those 32 victories look a lot less significant now. NOM has made itself a household name as it threw money, attack ads and poorly made video and radio spots to any state that dared to think about same-sex couples as human beings. Massachusetts? Here’s a billboard comparing your legislator to Benedict Arnold for choosing to switch sides on marriage and denounce discrimination. California? Have $1.8 million in funding to repeal gay marriage! Iowa, New Hampshire, New York, New Jersey, Maine and Rhode Island? Ever wonder what a gaythering storm looks like? New York? Let’s give you another video. Rhode Island? Let’s make a radio spot attacking the governor for wasting his time on same sex rights. Minnesota, Maine, Maryland and Washington? Have a video on the definition of bigotry and this handy dandy chart! 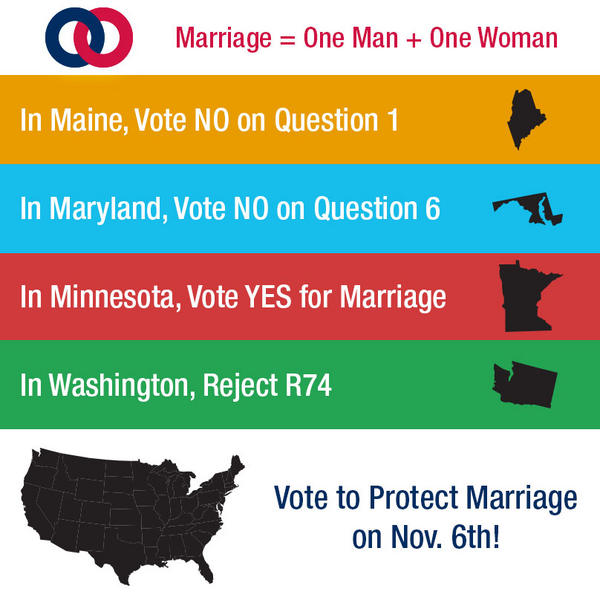 Did any of it work? Hardly. Massachusetts never passed. Prop 8 was ruled unconstitutional, so California’s almost back on our side. New York got all sorts of gay married. Rhode Island won civil unions as a consolation prize. Gay marriage rights were initially banned in Maine, but have triumphantly returned in a clean sweep with the other three ballot measures. NOM, you’re really making a difference.

I’m not sure where NOM believes all of these man-lady-marriage-supporting Americans live. (Probably the red states?) For all of these successful ballot measures, the majority of voters supported same-sex rights! Maybe Brown needs to look up how voting works, because while anti-gay supporters are out there, they’re no longer the majority. For the past few years, acceptance of same-sex couples has been on the up and up. This summer, a CNN/ORC International survey showed that same-sex marriage approval has steadily risen from 44% to 54% since 2008. We’re on your TV, we’re in your senate and we’re c0-existing with you and your fellow heterosexual citizens because hey, we’re people too.

Oh and this not being a watershed moment? Chances are he’s wrong there too: these four rulings aren’t happening in a vacuum. In a few weeks the Supreme Court will reanalyze DOMA and Prop 8 and those judges may use these votes as a barometer of America’s feelings towards same sex marriage. Legislators aren’t as worried to take a stand and neither is the president. Voters reappointed a man that decided he’d rather make his social values known than take the easy way out by staying silent. He took a stand for LGBT Americans, and no one is faulting him for it. That Mr. Brown is huge. 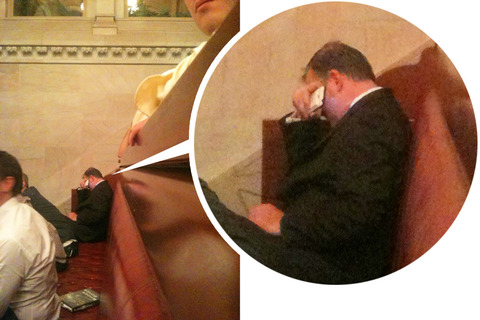 Get ready Mr. Brown. This is going to happen a lot. via Towleroad

One interesting thing that’s come from all of this is that NOM’s trying to distance themselves from the GOP. In interviews NOM has emphasized that anti-gay marriage laws lost by a narrower margin than Romney. In the beginning NOM wanted to partner up with the GOP and pretend they were the goose that could lay the golden egg for all of presidential hopefuls, so Rick Perry, Mitt Romney, Rick Santorum, Michele Bachmann, Newt Gingritch and Tim Pawlenty all made pacts. One by one they were thrown into obscurity and since the GOP are out of the white house for at least another four years, NOM is looking around to see who’s left. 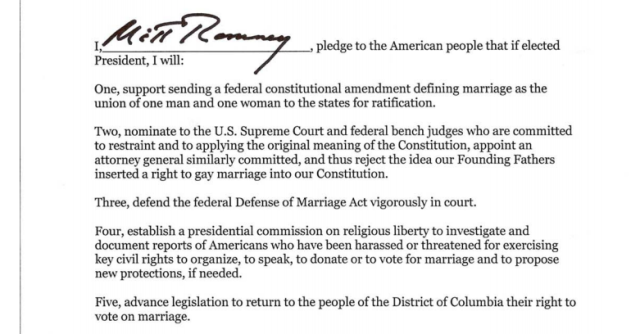 It seems like the only thing they can do is side with the religious zealots. In the beginning they pretended that they were just normal citizens doing their due diligence to protect traditional marriage, but now they have to admit that they’re religious nut jobs so they can seek out more of the same. Last year, Focus on the Family—another religious group—admitted they were losing the fight and were relatively silent during this election season, helping set a precedent that even bigoted, religious organizations can’t prevent change but can recognize the change around them. If Rhode Island, Illinois, Hawaii or Minnesota decide to push for gay marriage, we’ll find out if NOM runs television ads with bibles and crosses instead of manipulated children and disgruntled teachers.

The signs are clear that Brown and NOM are standing on the wrong side of progress, but instead of conceding defeat they’re shoving their fingers in their ears and pretending they can’t hear what’s actually being said. NOM should look to their founder Maggie Gallagher to see what the election battle truly was.

The Obama electorate defeated marriage. I’m guessing we lose at least three of tonight’s four races, and maybe four of the four. We were outspent eight-to-one — and no one was willing to speak for marriage, while the whole Democratic establishment and Hollywood campaigned for marriage. Last night really is a big loss, no way to spin it.

Take a cue from your predecessor and another from your former golden boy Mittsy and realize you’ve lost. Make sure to pick up your bible and your contracts on your way out. If you need some more time to edit your press release into a concession speech (or possibly add a storm motif or some confused children), we’ll give you and your video editors a few more hours.