“It is with great pride that I am introducing the Marriage Equality Act. Since the Assembly last passed the bill in 2009, there has been an overwhelming groundswell of support for marriage equality across our state.”

Obviously the National Organization for Marriage is in a hot panic about this threat to national security, our nation’s water supply and the war on drugs, and has therefore sunk $500,000 into a New York Ad Campaign (we don’t usually link to NOM because they are evil, but this seems like a big deal). Take a gander:

Furthermore, the National Organization for Marriage is openly offering to pay Republicans for their anti-equality votes! “Nation’s Leading Pro-Marriage Group says it will Spend $1 million to Primary any Republican who Votes to Redefine Marriage and Defend Democrats who Vote to Protect Marriage.” Is that allowed? I thought we were all supposed to pretend that lobbying was about sitting someone down and convincing them to see your side, not openly paying them to vote a certain way.

“It’s become quite clear in recent days in New York that Governor Cuomo and same-sex marriage advocates are targeting a select number of Democrat state Senators, as well as some Republicans in their desperate attempt to coerce legislators to support their agenda,” said Brian Brown, President of NOM.  “We want to be sure those courageous Democrats and Republicans who cast their vote of conscience in favor of traditional marriage will have a strong supporter if the radical gay activists come after them in their next election.”

[NOM  president Brian] Brown stated, “Tim Gill and other pro-gay marriage millionaires are funneling money into New York to sell a false bill of goods.  They failed in the last election to flip the legislature, and now they’re trying to convince legislators that they somehow have something to fear if they do the right thing and vote to protect marriage. NOM has defeated every pro-gay marriage Republican we’ve ever targeted, and we’re quite confident we will do so in New York, should that become necessary.” 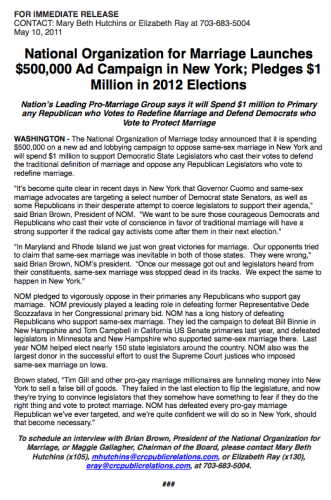 It’s a change from a group which traditionally spends the bulk of its lobbying money AGAINST candidates they dislike, rather than towards candidates they do like. In 2010, they spent $172,189 campaigning against California Democratic Candidate Barbara Boxer, who went ahead and won anyhow.

How do we feel about this new ad? Does it carry the same cinematic weight as their initial masterpiece, The Gathering Storm? (the parodies were funny though)