As a U.S. citizen, an Ohioan by birth and full-time gay, I’ve been riding a political high (some have dubbed it a “gloatwave”) since Tuesday. We won so many things! Did you see Riese’s election-inspired TIRTIL and Laura and Vanessa’s interview with Sally Kohn? Ali’s epic Election OPEN THREAD was a thing of patriotic beauty. And remember how the best-dressed Obama party attendee was our starlet, Brandy? Aren’t you excited about how much the GOP mucked it all up?

In non-political happenings, The Miseducation of Cameron Post author Emily Danforth spent loads of time answering your questions about the book and we love her very much for it. We also continued our Oh Gay Cupid! series with posts about feeling weird because you met your girl online and turning not-so-great dates into life wins. Then it snowed on the east coast which gave us a good reason to stay indoors and cook or maybe watch Unicorn Plan-It. All this excitement made for some spectacular commenting this week so let’s get to it!

On 25 Things Mitt Romney Has Time To Do Now:

The Vertical Integration Award to flamboyant cuttlefish: “26 – Join forces with Bic to create highly unsuccessful “Binders for Women” product line. I would love to read the Amazon reviews.“

The Keep Your Tray Tables In The Upright Position Award to Emma “#27 Design an airplane with windows that can open.”

On Five Of The Most Recently Reported Reasons Why Romney and Ryan Suck:

The Sweetest Thing Award to Heath and Heathbarre: 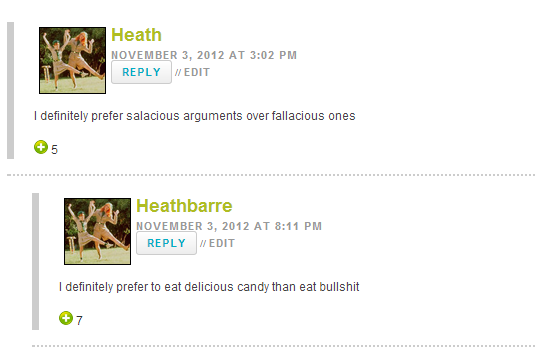 On Notes On Watching America Vote, From A Canadian:

The Bad Luck Canuck Award to Grace_B: “I’m happy that Obama won, but now we won’t have an influx of cute gays coming up here to escape, so I don’t know how to feel (just kidding. They all would’ve moved to Vancouver or Toronto anyway, let’s be honest.)”

The Model Cis-Male Award to Wil: 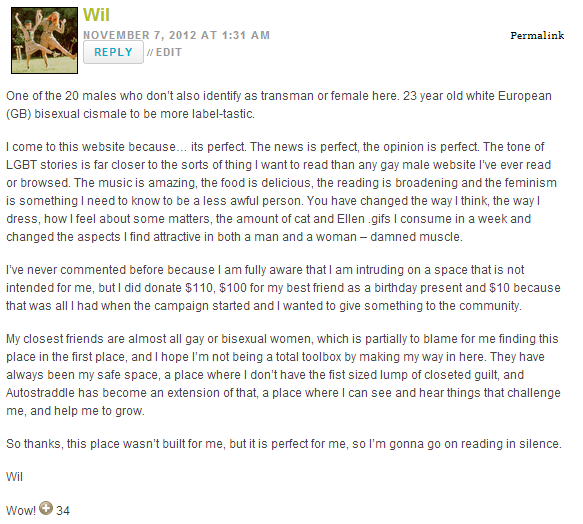 The Something Else Nate Silver Should Analyze Award to Sophie: “I think the tumblr posts from non-Americans are evenly split between “If Romney wins you can all come live in my country” and “If Romney wins I’m coming to your country to punch you all.””

The (Chicken) Bone To Pick Award to Maggs: “So glad we had a good election day. My only beef is that Kentucky doesn’t look enough like a pixelated chicken leg in the whiteboard map, and that is a tiny beef.”

On We Won So Many Things!: