Many essential relief efforts have been underway since hurricane Sandy devastated parts of the Caribbean and United States last month, such as those we’ve already mentioned here and here. One of the teams out on the ground helping is Renegade Sandy Relief (RSR) – a volunteer-based relief effort organised by musician Holly Miranda and photographer iO Tillett Wright.

RSR is all about taking direct relief action in the worst affected areas of New York. All donations received go to the purchase of much-needed supplies that are then rapidly distributed to people in areas that were hit the hardest by hurricane Sandy.

Holly on the establishment of RSR (paraphrased, read the full text here):

“One week ago today iO Tillett Wright and I began texting back and forth about what we could do to help the residents of the Warbasse buildings in Brighton Beach, who couldn’t physically get down to the ground level to pick up the donations that were being dropped off. By the following morning we had an entire bar full (The Drink in Williamsburg, a space donated by owner Lane Sanders) of donations and somewhere around 50 people showed up to help us. We made about two thousand sandwiches, filled seven vehicles with supplies and took thirty-five people down to Brighton Beach to climb the dark stairs with us. Another drive was started by Sunday, this time with four drop-off locations; five moving trucks full of donations were taken to areas in need. All cash donations were spend on supplies and two vans full of volunteers went to Rockaway to assist with the clean up.

Since then this effort has rapidly evolved (out of necessity) into a legit functioning volunteer based relief. We are working on our third drive and liaising directly with the Rockaway Surf Club to get them exactly what they need, as well as organizing benefits and concerts, food trucks… the list goes on.” 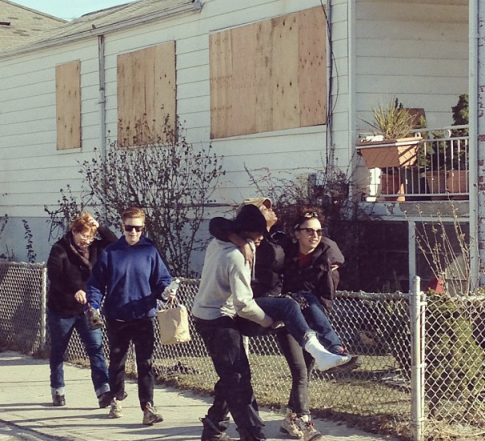 HOW YOU CAN HELP

There are a number of ways you can support Renegade Sandy Relief, no matter where you’re based. Here’s a few:

Donate your time and/or goods.
The next RSR drive is happening this weekend, 9 – 11 November, at Crest Hardware in Williamsburg, NY. Crest are offering 15% off items bought in-store and donated to the drive. Here’s all the info and the list of items desperately needed. RSR are also looking for volunteers such as cooks drivers.

More information about how you can help — and details on how you can organise your own drive — can be found on the Renegade Sandy Relief tumblr.

Donate money.
All donations go towards supplies that are directly shuttled out to people who need them the most. DONATE HERE.

Live in LA? Attend this benefit.
LaHeartsNy is throwing a benefit this Sunday, Nov 11 at Space 15 Twenty in Los Angeles. Allof the proceeds will go to RSR efforts. You’ll be supporting a great cause but also rad musicians are playing, so win-win. Here are the details: 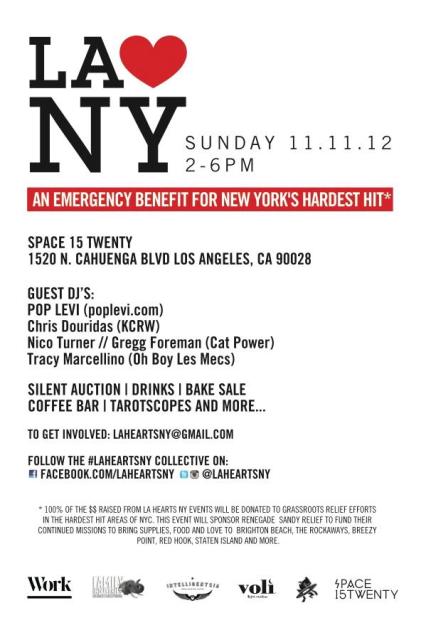