Some of you shared with us your plans for hunkering down with various forms of alcoholic beverages and seasons of the L Word, Real or otherwise, and now all of you who did indeed spend the storm hunkered down with television and alcohol are eager to help out those who didn’t.

After backup generators failed workers at the Tisch Medical Center were forced to evacuate over 200 patients. (AP Photo/ John Minchillo)

Major natural disasters connect us at the basic core of humanity; they also highlight vast economic and cultural disparities with the human  (and non-human) suffering that results.

There are a lot of political hot button issues Frankenstorm Sandy is forcing us to face to the tune of billions of dollars, not the least of which is climate change. Lots of people were up in arms about Mayor Bloomberg’s possible plan to go ahead with the NYC Marathon Sunday. (The NYC Marathon has since been cancelled.)

If you’re someone in the NY area who’s minimally affected by these issues, you don’t need to feel guilty, but you should feel grateful. And you can channel that into helping the people who are still in dire need of help. Lower-income areas especially haven’t received the same level of support that other parts of the city have, and marginalized people have even more issues to deal with during an extreme weather crisis than their more privileged neighbors – for instance, in areas where power is out, electronic benefit cards can’t be used to buy food. Sandy has made economic divisions of the area even more extreme than usual. There are people who still need help urgently, but they may be in parts of the city that the news isn’t talking about. So if you’re lucky enough that you and the people you love are taken care of, please, help take care of other people, too. 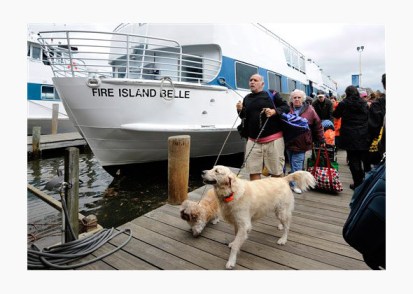 People and pets evacuate on one of the last ferries out of Fire Island before the storm. Kathy Kmonicek, AP

WHAT YOU CAN DO TO HELP:

Communities outside of NYC:
General info for volunteering and giving money/resources:

NYC’s public radio station WNYC 93.9 is providing coverage of coverage from Sandy and can be streamed online here. Please share any additional resources in the comment section below and we will continue to update this post.

Since this piece originally ran we have posted to other related stories including the Renegade Sandy Relief project with Holly Miranda and the devastating news about the flooded and destroyed Ali Forney Drop–In Center.  The International Gay and Lesbian Human Rights Commission has also learned that 22 years of their archives have been flooded and destroyed. All of these projects are seeking financial donations.