Welcome back to No Filter, a column about candy corn and the human beings of various genders who love it. Halloween has come and gone and purple string lights are like 90% off at Duane Reade. How did you spend your Halloween? I had big plans all year to go as either a skeletorus spider or problematic sea monster Old Gregg, but in the end I drew some super-lazy zombie makeup on my face and called it a day. Today, we will peer into the lives of many queer humans, some famous stars of stage and screen and some weirdos who write for this website, and we will marvel at their Halloween costumes. Sound good? Let’s get started.

Laverne Cox said she went as herself, but celebrated at the WeHo Carnival/40th Anniversary of Rocky Horror. Anyway, I’ll be singing this song all afternoon.

Unrelated to Halloween, Annie Clark came to Instagram this week with an important PSA. Last week I saw a couple of girls extend their selfie stick into the lion’s lair at the Lincoln Park Zoo, which made them likely contenders for this list. Guys, don’t do that.

So happy this lil gem finally arrived. The most basic concept. @beagoodpersonbrand is inspiring people everywhere. I wore it in the airport and was stopped every few people with big smiles!!! Thank you so much for the shirt I will do my best to rep the shirt. Check them out Insta peeps!!

Additionally, Megan Rapinoe has some curious advice for you. 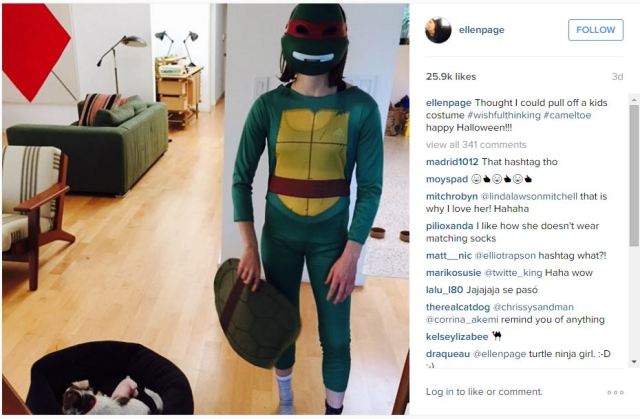 Back to Halloween – Ellen Page doesn’t match her socks. That’s about all I’ve got.

Hi Danielle Brooks, you’re like, really pretty. What were you for Halloween? I want to know. Text me.

Michelle Rodriguez is slowly winning me over with her Instagram game. Here she is as.. this. 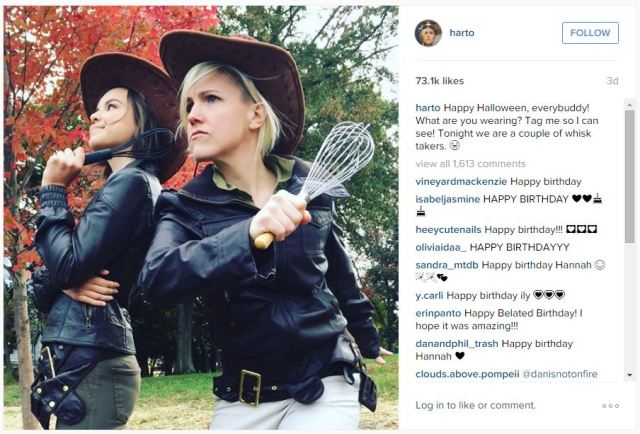 I could not ignore Hannah, Ingrid and this delightful pun.

https://instagram.com/p/9hdcyzmFaY/
I will tell you guys a shameful secret: I am actually not very good at telling the sisters Quin apart a pretty solid amount of the time. One of these children is Big Bird and the other one is Oscar the Grouch and now I kind of need to know which is which so I can figure out which one I identify with deeply (it’s Oscar). Help me.

Flexin with the cast of Clueless and a skeleton pizza More on snap chat: julianunesmusic

Julia Nunes and Dannielle Owens-Reid went as Tai and Travis, the couple I root for in my heart.

Autostraddle’s own Yvonne and her girlfriend Gloria went as Selena and Chris Perez, and will you believe Gloria did not even make herself a Cholula holster?!?!?!? NEXT YEAR.

HAPPY HALLOWEEN! pictured here are classic gal pals Calvin + Hobbes. WHO WERE YOU TELL ME EVERYTHING WAS IT SPOOKY?!

Our fearless leader and CEO Riese and her gal pal Abby went as Calvin and Hobbes, like they do pretty much every day.

Design Director Alex and her girlfriend Mary went as.. this.

https://instagram.com/p/9l_FXCK7ae/
Robin, Kip and their friend Loren went as Hypodermic Sally, baby vampire Holden and the Countess from American Horror Story and I can’t deal with any of it. 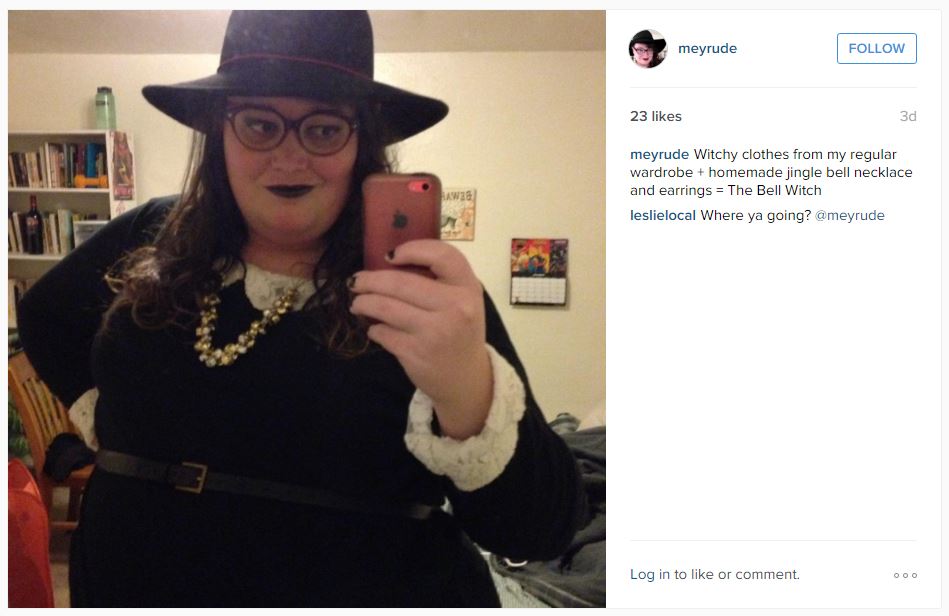 Crystal and I went as the twins from The Shining.

Join us next week, when the staff of Autostraddle dress up as turkeys and re-stage the quintessentially troubling play from Addams Family Values.