It says a lot about the state of lesbian and bisexual women in film, in general, that I remembered 2019 as a pretty decent year because I saw one (1) entire gay woman in a movie where she was: a) such a main character that she had half the dialogue and was even on the movie poster, b) so gay that no one could leave the theater without knowing she was gay, and c) the theater was stadium-style in the suburbs and full of people, not an arthouse cinema in Greenwich Village with two other lesbians and one retired straight couple with a season pass to IFC.

But of course Booksmart is only one movie and — according to GLAAD’s annual Studio Responsibility Index, which dropped this morning — major studios released 118 movies in 2019. Get ready for some even more dismal numbers: Of those 118 movies, 15 included gay men, eight included lesbians, three included bisexual characters, and zero included trans characters. Also only 34% of those characters were people of color (a downtrend from 2018’s downtrend). But wait, it gets worse! There were 50 total LGB characters in major studio films, and 28 of those 50 characters received less than three minutes of speaking time and 21 of them were on-screen for less than a minute. GLAAD’s description of the two animated family films that included gay characters is almost too sad to look at: “Two dads dropping their child off to camp in Paramount’s Wonder Park, and two moms escorting their child to school in Disney’s Toy Story 4.” Blink (or be straight) and you miss it!

The write-up for Charlie’s Angels was also particularly depressing: “Charlie’s Angels features out actress Kristen Stewart as Sabina, one of the spies and a lesbian. In a mid-film scene, Sabina is distracted from her case when she stops to check out an attractive woman at the gym. Though the moment is technically enough to confirm Sabina’s interest in women.” 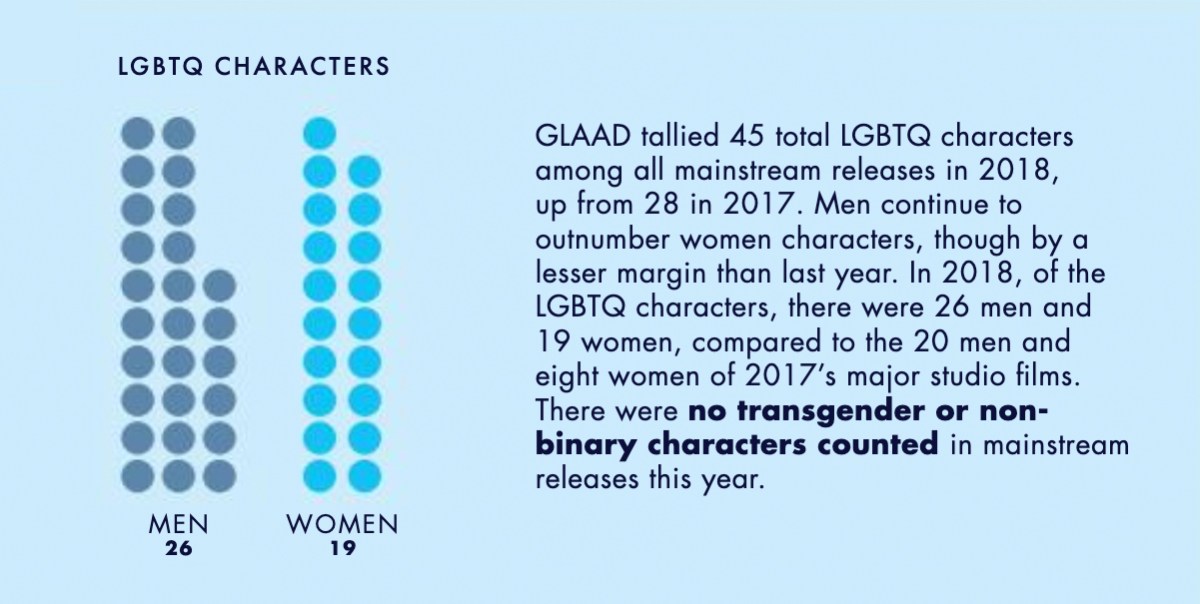 GLAAD’s SRI focused on the eight studios that had the highest theatrical grosses in 2019, and ranked them on a scale of “failing” to “insufficient” to “poor.” The next step up is “good,” but no studio received that rating for 2019.

I was unsurprised looking at these numbers. GLAAD’s Studio Responsibility Index is always bleak, which is one of the reasons why it’s so essential. But I was surprised by how many of these movies I knew a lot about because they included gay characters, even if only briefly — which is something GLAAD goes to great lengths to note every year. Megan Townsend, GLAAD’s Director of Entertainment Research & Analysis, consistently hammers home: “Telling meaningful LGBTQ stories is not just the right thing to do, it’s also just smart business. LGBTQ people are a significant audience who are supporting LGBTQ-inclusive films with our dollars and digital attention. Nielsen found LGBTQ audiences are more likely to see a new theatrical release more than once compared to straight audiences, and continue to stay engaged consumers, with higher levels of purchasing a digital copy, subscription service, and spreading the word online.” 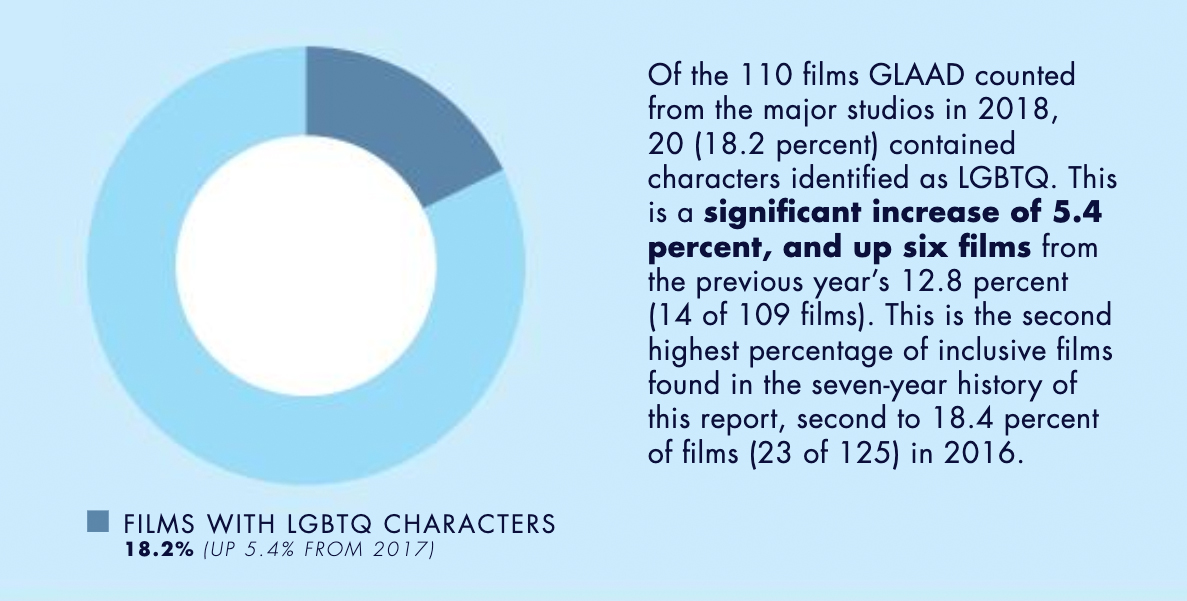 At Autostraddle we know that’s true because when we write about a movie with actual LGBTQ+ women, everyone reads and shares it on social media and then comes back to comment with their own opinions after they’ve watched it (usually more than once). We will subscribe to any platform to watch a queer movie, drive for hours to see it in theaters; heck, we will even buy physical DVDs, which Drew Gregory wrote about beautifully this week in her piece about Criterion releasing Portrait Of A Lady on Fire, which was huge deal, but also out of 1,051 titles in Criterion’s collection, only 18 feature queer women.

GLAAD agrees: “Hollywood must feel encouraged and empowered to leverage that interest and buying power by delivering movies that include substantial LGBTQ characters and by unambiguously marketing and promoting these movies.”