Hey backpackers! You should put on some more sunscreen. Rachel would approve.

+ A mural depicting LGBT Latinos in San Francisco was vandalized multiple times last week and now the artists are facing threatening and offensive comments on social media. The mural, created by Manuel Paul of the Maricón Collective, features a gay couple, a lesbian couple and a trans man and with the words “Por Vida.” The vandals spray painted the couples’ faces and left the trans man untouched but after news broke of the story, the vandals returned to deface the trans man too. The mural was replaced and was then defaced again later in the week. The gallery and artists have received homophobic messages on their instagrams. The gallery hopes to replace the mural again but this time they’re asking the community for help by donating funds. The gallery also plans to host a community forum in the future.

The defacement and re-defacement of the current digital mural by Manuel Paul of Maricón Collective has only proven the credibility of its purpose. Galeria de la Raza believes in the importance of continued dialogue about LGBTQ visibility, awareness, and acceptance in the Mission District and within the greater Latin@ communities. Galería does not condone actions of hate, violence and homophobia and is dedicated to continuing to promote understanding and tolerance through peaceful means. While ignorance and hate may have been expressed by the few, we thank the extraordinarily generous support we have received from the vast majority of the community. We are in the process of organizing a community forum to engage the larger community in the coming days but in the meantime we need to raise funds to fix the current mural. Please consider making a donation at:https://donatenow.networkforgood.org/1392515

+ A Florida police officer is suspended after forcing a teen lesbian to strip while he masturbated and threatened to arrest her if she didn’t comply. Sgt. Jesus Menocal, Jr., pulled over a young lesbian couple, who are 17 and 20 years old, after they made an illegal U-turn. Menocal asked the 17-year-old to get in his police car and drove her to a substation where he took her to a private room and proceeded to ask her intrusive questions like the classic “how do lesbians have sex?” He then started touching his genitals and ordered the teenager to strip. She took off her shorts and refused to take off her top and bra. The teen was released with no charges after 15 minutes. The couple filed a complaint. The officer was suspended with pay and there’s now a pending investigation.

+ Tondalo Hall, who’s sentenced to 30 years in prison for allowing child abuse, while the actual abuser of her child only served two years, was granted a full hearing on her application to shorten her sentence. Hall described in her application for clemency how she was in an abusive relationship with Robert Braxton, the father of her child, and feared for her life and her child’s life if she alerted authorities about his violence.

+ After July 1, trans state employees and trans family members of state employees in Nevada can use their state’s health insurance to cover transition-related medical procedures including therapy, hormone therapy and gender affirming surgeries.

+ Rick Scarborough, antigay pastor from Texas, really doesn’t want gays allowed to be married in this country because apparently he would set himself on fire if the Supreme Court decides on marriage equality and that it’s all a satanic plot.

+ Charleston’s Emmanuel AME church reopened for service on Sunday. Reverend Norvel Goff led the service and preached about love and forgiveness. The service was solemn and emotional and began with reading the names of the 9 people who were murdered in the church. There was a heavy police presence with police checking bags and stationed throughout the church. 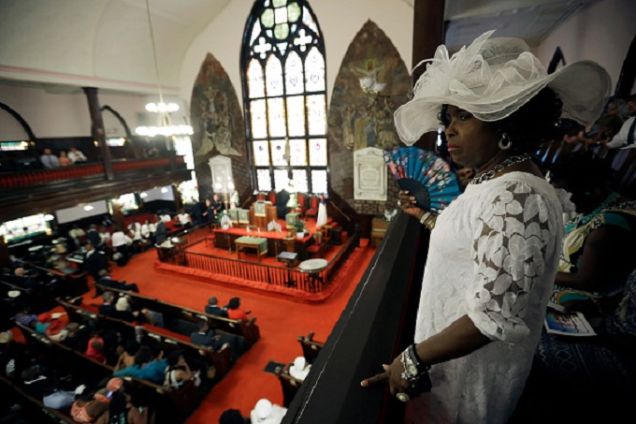 + Anonymous Twitter sleuths @HenryKrinkle and @EMQuangel uncovered Dylann Roof’s outright racist manifesto. (Who started calling it a manifesto? What makes it a manifesto?) Anyways, I didn’t read all of it because it’s just complete filth but some of the stuff I skimmed through sounds a lot like the beliefs of regular white people you may know.

+ In Roof’s manifesto, he mentions the Council of Conservative Citizens, a designated white nationalist hate group, as a source of information which inspired him to kill 9 black people in their church. The current leader of CCC is Earl Holt, who has donated tens of thousands of dollars to Republican candidates for President and Congress. Now those candidates are trying to give back his money and disassociate from his name. Presidential candidate Ted Cruz will be refunding the $8,500 that Holt donated to his campaign and PAC. Presidential candidate Rand Paul said he would be donating the money he received from Holt to families of the victims. And presidential candidate Scott Walker will return his $3,500 donation back to Holt.

+ The South Carolina General Assembly is expected to vote today on whether or not to extend their regular session (which ended June 4) to debate the removal of the Confederate flag on the state capitol. NBC News reports, “A decision to continue the session would take two-thirds of the vote, as would passing legislation to take down the flag.” On Monday, Gov. Nikki Haley called for the removal of the Confederate flag from the state capitol at a news conference in the wake of the 9 killed at a historic Black church. Haley added she’d use her power as governor to call a special session of the state legislature if they don’t vote to debate it.

“The murderer, now locked up in Charleston, said he hoped his actions would start a race war. We have an opportunity to show that not only was he wrong, but that just the opposite is happening,” Haley said. “My hope is that by removing a symbol that divides us, we can move our state forward in harmony, and we can honor the nine blessed souls who are now in heaven.”

+ After Haley’s announcement, Walmart and Sears Holding Corp announced they will no longer sell Confederate flag merchandise. Virginia Gov. Terry McAuliffe and Mississippi House Speaker Philip Gunn followed in Haley’s lead and denounced the use of the Confederate flag on their license plates and on their state flag respectively.