Before we get to this week’s Lumberjanes #15 review, let’s talk about some Lumberjanes-adjacent news! Co-creator and co-writer Noelle Stevenson’s super amazing and incredible webcomic Nimona is going to be made into an animated movie! If you haven’t read the webcomic or bought the book (which is great and should be a top-priority purchase for all comic-lovers), Nimona is about a supervillain, his arch-rival/former friend/angsty object of affection and his new shape-shifting assistant. It’s full of cool science and great art and lots of feelings and really great characters. Stevenson also had another comic come out this week, the first issue of her new take on Runaways, which features mostly new characters (like Bucky, Cloak and Dagger, Skaar and queer versions of Jubilee and Pixie) and one returning Runaway, Molly Hayes. It had just the perfect amount of classic Runaways attitude and sass and a ton of freshness, style and fun. If you enjoyed Brian K. Vaughan’s original run or comics about rebellious teens or girl gangs I definitely think you’ll love this.

From Runaways #1 art by Sanford Greene

Now for the review. When we last visited our favorite group of hard-core lady types, Jen was making friends with a mysterious but glamorous hunter out in the woods, Rosie was headed to that hunter’s house to figure out what she was up too, Barney had joined up with the girls from Roanoke Cabin and the Lumberjanes were out wandering in the snow looking for Jen. It seems like everyone’s obsessed with Jen this week! Good for you, Jen! You deserve some attention! 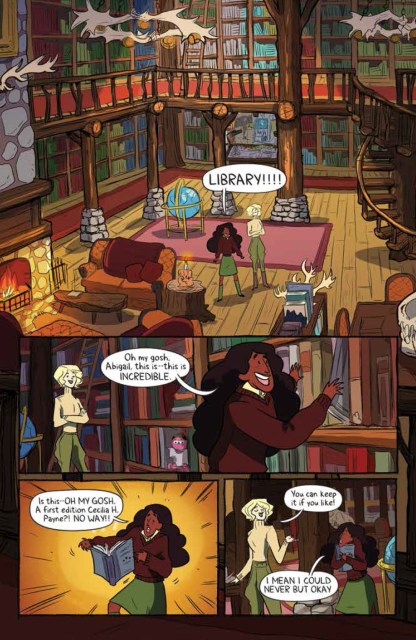 We first pick up this week’s story at Abigail (the mysterious and glamorous one)’s cabin in the woods where she’s sharing her giant Beauty and the Beast-esque library with Jen. While Jen is quite enraptured by the library, with its first edition Cecelia H. Paynes and Holy Kittens, she’s also a little worried when Abigail starts to insinuate that Jen never needs to leave and go back to her duties as a Lumberjane Counselor. Things really start getting intense when the doorbell rings and Abigail’s first instinct is to reach for her shotgun. Good thing it’s Rosie and she’s able to seemingly calm Abigail down with a huge hug and some kind words.

Look at how cute Abigail is, just totally melting into that hug! I love it! We also learn more about her shared history with Rosie and the Lumberjanes. It seems like they were best friends (and maybe more) who fought banshees and exorcised sheep and then drifted apart after Rosie didn’t stand up for Abigail during an important moment in her life. So much drama!

Out in the Wintery Summer Wonderland, the ‘Janes are still following Barney’s lead to try to follow the beasts who they think have Jen. When Jo suggests that they stop for the night, once more Barney’s on top of it, and once more, Jo’s jealous. She’s also worried that they’re woefully unprepared for actual survival or even just dealing with all the weird stuff they keep running into. Barney tries to reassure her, saying that the Scouting Lads could learn about how to be brave and smart and brainwash-proof from the Lumberjanes.

This next scene with the girls is maybe my favorite in the entire issue. They’re all snuggled up sleeping in their ice fort, with Bubbles and Marigold all curled up and with Molly cuddling with Mal’s head all adorable-like. Jo, however can’t sleep. Barney tries to offer some tea and conversation, but Jo’s still got a lot of jealousy and shuts Barney down right away, saying that she has her own sleeping remedy and that “it’s a LUMBERJANES secret. YOU wouldn’t understand.” Majorly harsh. I sort of feel for Jo here, April (her best friend in the world) is totally fawning over Barney’s every move, plus Barney’s stepping up with a bunch of skills that are normally in Jo’s area of expertise. But still, Barney’s just looking to fit in with this new friend group and she’s not having that at all. Why can’t we all just get along????

Jo’s cold shoulder doesn’t last long, though, as the antler wolves from the last issue burst through the roof of the ice fort and once again the girls are in trouble. But this time April steps up and refuses to go down without a fight. This is where the issue really picks up. As we stay with the Lumberjanes, we see the antler wolves warning them about a monster. We also see Abigail pull a trap door on Jen and Rosie, dropping them into a pit so that they can’t stop her (but from doing what?!?). 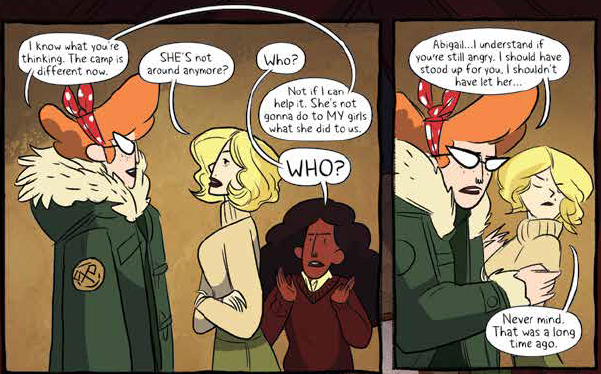 As this storyline goes on, it just gets more and more exciting! We’re learning more about the history of the camp and Rosie specifically. We’re learning that the Lumberjanes apparently have a secret purpose that Rosie keeps hidden even from Jen. We’re learning more about the mysterious woods that surrounds the camp and what lives there. Basically, we’re seeing some super incredible world-building and I’m loving it. I’m also loving how we’re getting to see entirely new sides to these characters, especially Barney, Jo, Jen and Rosie, who, I think, are the clear stars of this storyline. The Lumberjanes team just continues to put out one of the best comics on the shelves today and I absolutely cannot wait to read next week’s issue.

Speaking of the next issue, it’s going to be co-writer and co-creator Noelle Stevenson’s second-to-last, as just yesterday she announced on twitter that this arc will be her last (at least for the time being) and that she’ll stay on in a consulting capacity. She also announced that Kat Leyh who made the great Supercakes comics and who I’ve talked about a bunch of times here, will be taking over to co-write with Shannon Watters. I’m sad to see Stevenson go, but she’s given us terrific work on one of the best and most ground-breaking comics in stores today, and so I wish nothing but the best for her in the future and I look forward to what Leyh can do with the book!

Cleopatra in Space Vol. 2 The Thief and the Sword (Graphix)

Jem and the Holograms #4 (IDW)