Hello, Autostraddlers! My name is Heather Hogan and I’m a new editor here at the greatest website of our generation! I’ve spent the last six years working as the senior editor at AfterEllen, writing about all the queer pop culture things under the sun. And now, finally, like the B-level superheroes who got the call to join The Avengers and The Justice League, I have arrived at your doorstep, ready to laugh and learn and knock out the occasional villain with you. You’ll see me around all over the place, I hope. Please say hi. I’m excited to know and love you.

It’s a pretty rad time to be alive and able to afford cable if you’re a lady who loves ladies and also TV. We’ve got lesbian doctors saving lives, bisexual private investigators playing politics, gay teenagers falling in love, a queer zombie hunter, a queer pirate, queer superheroes, and enough lesbian cops and lesbian moms to start an army. (With Stef Foster of The Fosters as commander, of course, because she’s both a lesbian mom and a lesbian cop. She’s the triple word score on your gay TV scrabble board!)

GLAAD counts 75 lesbian/bisexual female characters on TV these days, which, as Riese pointed out a couple of weeks ago, is maybe a little misleading since several of those characters haven’t participated in any queer shenanigans in years and others are guest characters who only pop up once or twice a season.

But there’s still a lot to love! And a lot more than we can fully recap! And, honestly, a lot more than you’d want us to fully recap because do you really care what kind of bollocky wankshite the 2.5 Men get up to while waiting for Amber Tamblyn‘s character to do a lesbian thing? No, of course not. Because you have a functioning brain.

With your needs and feelings in mind (all day every day), we’ve decided to roll out a weekly round-up of all the gay stuff that happened on TV that didn’t warrant a full recap. It’s like a weekend potluck. A buffet of delicious leftovers. A smorgasbord of sapphic delights. No really, we can’t think of what to title this feature (right now we’re going with “This Week In Gay TV”), so feel free to offer suggestions! 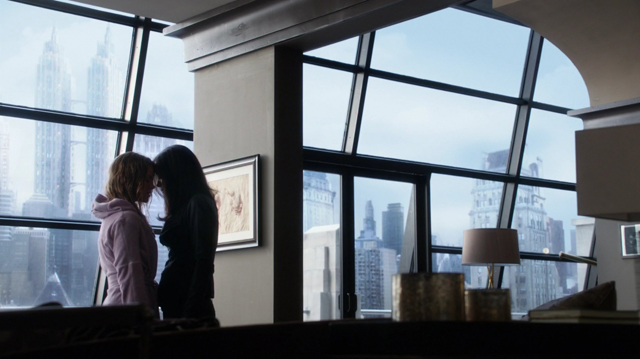 You ever scissor with the devil in the pale moonlight?

I’ll be recapping Gotham weekly starting next Wednesday, but let me bring you up to speed with what’s going on in that pre-Batman cesspool of corruption and greed. As you know, Gotham City Police Department is home to kickass lesbian Latina detective Renee Montoya, who we know had a Thing with Jim Gordon’s fiancé, Barbara Kean. Over the past two weeks, we’ve found out just how deep their Thing really went. (Ahem.)

Because Babs is either agoraphobic or under house arrest or something, she never leaves her loft, but that’s okay because Renee Montoya doesn’t mind a little mild breaking and entering every now and then. In episode 103, “The Balloonman,” Renee catches Barbara taking a bubble bath and smoking a joint in the middle of the day to ease the anxiety of knowing Jim Gordon is going to come home at some point and get his boringness all over everything. The ladies have a chat about how they were once addicted to drugs and alcohol and each other — like, standing toe-to-toe with their faces three inches apart, they have this conversation — and just when they’re about to get their homosexy smooch on, Babs pulls away and tells Renee to skedaddle.

Renee warns Barbara for the hundredth time that Jim is in bed with mob boss Carmine Falcone, which isn’t true, but Renee doesn’t know that because all signs point to it being a fact.

In this week’s episode, “Arkham,” Barbara finally confesses to Jim that she had a relationship “of only a year” with Detective Montoya, which pisses him off properly. He says it’s not because Barbara is bisexual, but because she lied to him, a thing that seems pretty true. They kind of break up and Barbara leaves the house for ten minutes, so really it’s a win-win.

Also, this week, Fish Mooney holds a Hunger Games-style contest to find a new crooner for her club. Requirements: She has to be able to sing, and convincingly seduce both men and women, and when faced with the possibility of unemployment must be willing to beat a potential co-worker to death with her fists. Fish finds her girl. She feels very happy/evil about it. 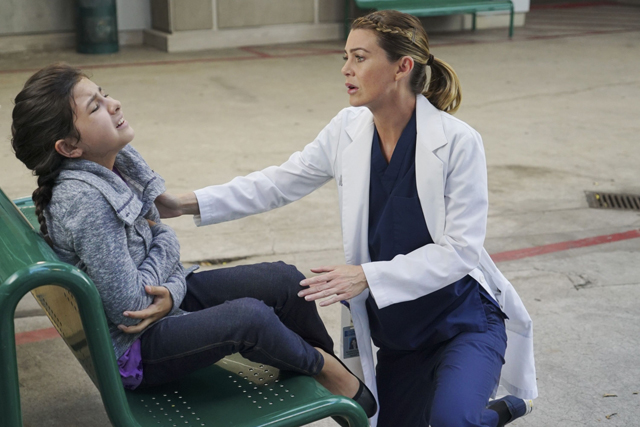 I’m so hungry! I just want a Calzona!

There was no Autostraddle recap of this week’s Grey’s Anatomy because there was no lesbian stuff at all on this week’s Grey’s Anatomy, presumably because the network’s entire season-long quotient of homosexuality was met in the 10:00 p.m. timeslot when How to Get Away with Murder‘s gay wannabe lawyer, Connor Walsh, had sex with every man on the show, and also the phrase “He did this thing to my ass that made my eyes water” was used. 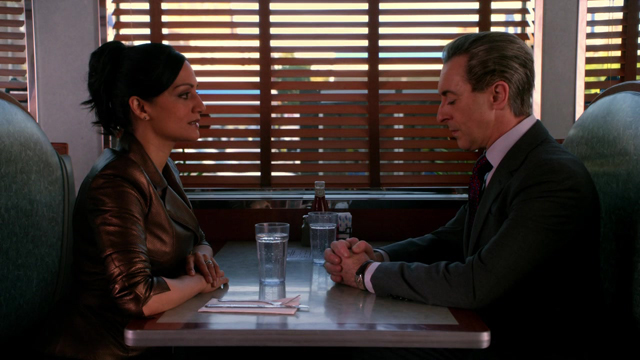 I got nominated for a lot more Golden Globes and Emmys when I was making out with chicks. Just sayin’.

Archie Panjabi, who plays be-booted, leather jacketed bisexual PI Kalinda Sharma, is calling it quits with The Good Wife at the end of this season, probably because 20th Century Fox offered her a show of her own and she figured that she’d like that a lot more than the paltry screentime and crappy stories she’s endured these last few years on her own show.

To wit, this week, Kalinda spends her time reliving her affair with Peter. She promises Alicia she’ll keep quiet about it if Alicia decides to run for office. She also sits in the dark in a car with Bishop explaining that he lost his job because Alicia is running for office. That’s it. That’s all. Four minutes max. I don’t want to ignore Kalinda because she’s not in a relationship with another woman. I think that’s a dangerous, slippery slope that leads to bi erasure and the dismissal of a wide variety of queer experiences, but Kalinda’s story is so boring these days. Not because she’s not gaying it up around town, but because it’s bland and vanilla and beneath her.

Maybe they’ll bring back Lana for a Kalinda’s final hurrah. 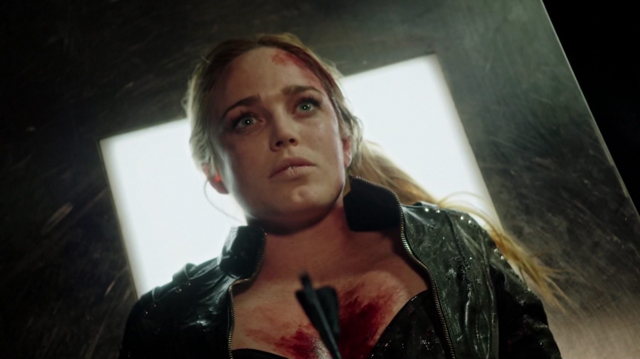 I’ll finally get to meet Xena, I guess.

Two weeks ago, during the third season premiere of Arrow, bisexual badass Sara Lance took a couple of arrows to the chest and died. The show’s bosses say Sara’s death was necessary to advance the plot of other characters, a thing known as “getting fridged” in the comic book world. (As in, “But we had to brutally murder Green Lantern’s girlfriend and stuff her mangled body into a refrigerator for him to reach his true crime-fighting potential!”) Anyway, this week, Oliver & Co. found Sara’s body and carried it around and cried over it and raged over it and promised to seek vengeance against her killer. Apparently Sara’s ex-girlfriend, Nyssa al Ghul, is going to show up next week to bring some assassin realness to the hunt for justice. 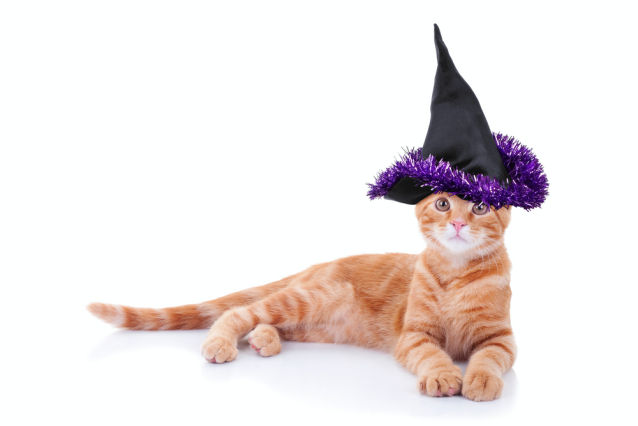 In terms of what you’ll find here in these weekly TV round-ups, none of it will be bloody. I’m a clumsy puppy, terrified of thunder, and even the sight of fake blood makes me queasy. I asked around and found out some good news about this week’s season five premiere of The Walking Dead: Tara the Lesbian is still alive! No, you can’t have a screencap of Tara. You’re just going to have to trust me. I tried to get a screencap and accidentally saw some cannibals and couldn’t eat lunch. But this photo is what happened when I searched “kitten zombie” on Shutterstock, so. 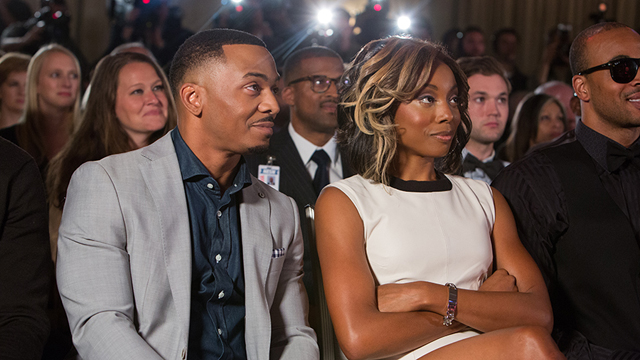 The WNBA will be my Promised Land!

There’s a very real chance you haven’t heard of Starz’s new show Survivor’s Remorse, so here’s the deal: It’s a six-episode series about a young basketball superstar named Cam Calloway who signs an enormous contract with a professional basketball team in Atlanta in his second year in the league. (The show didn’t buy the rights to actually use NBA lingo, so pretend I said he’s playing for the Hawks.) In the two episodes of the show that have aired so far, the main focus has been on the way Cam and his family deal with him suddenly becoming a multi-millionaire. The title alludes to the fact that Cam feels really guilty about making it out of the projects when so many of his friends didn’t have the chance.

One of the main characters is Cam’s older sister, M-Chuck, who is just super aggressively gay. It’s off-putting but also kind of refreshing, which confuses me a little bit. M-Chuck equates the number of smiley emoticons a girl sends her with the length of time the girl wants you to sit on her face. She spends her bathroom time looking for women to sext. She’s got a drawer full of vibrating dicks she offers to let her haters suck on.

I have mixed feelings about the show as a whole, which doesn’t always do justice to the weighty topics it tries to tackle, but I plan to keep watching. There are only four episodes left this season, but it’s already been renewed for a second. 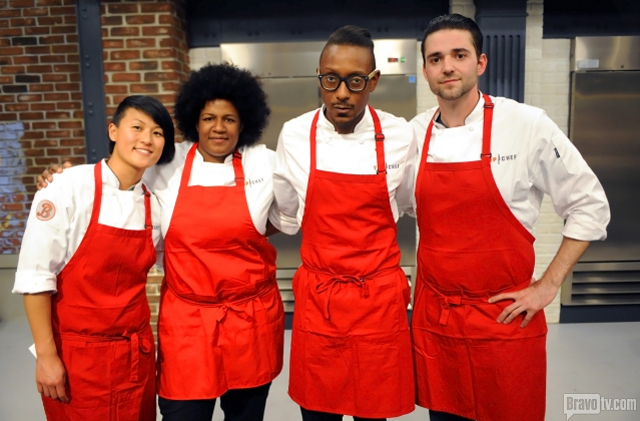 L to R: Melissa King, Joy Crump (for real!), a guy who nearly made Padma throw up, and a jerk who got kicked off.

Season 12 of Top Chef kicked off this week and even though lesbian contestant Melissa King didn’t have much screen time, I want to mention her. First of all because her Bravo.com bio is redundantly amazing: “A self-proclaimed ‘cookie monster,’ she loves cookies!” And also because I want to talk about the hardcore shade Padma Lakshmi threw down this week. “I would like it if you would not only clean up your act but also your station,” is a thing she actually said. And then she spit out a pork belly. Hopefully, Lesbian Melissa King will have more to do in the coming weeks.

Transparent 104 recap
Please gather three boxes of Kleenex before you click through to read this recap/watch this episode.

Jane the Virgin review
Despite its dicey premise, the CW’s new comedy-drama offers up lots of feminist elements and a lesbian gynecologist to boot.

Faking It 204 recap
More Laverne Cox! And Amy processes her “drunken decision to take a baloney ride with Liam’s pony.”

And that was your week in gay TV. Prayer circle for Imogen and Jack, who return for Degrassi‘s 14th season in ten days. And a human shield for The Walking Dead‘s Tara, who is probably doomed simply by nature of being a lesbian TV Tara.

Heather has written 1174 articles for us.