Tomorrow, on both MTV and Logo, people of all genders, ethnicities, sexualities and beliefs will be able to watch a new hour-long documentary produced and hosted by Laverne Cox focusing on the lives of seven young trans people and on the experiences of trans people across America. Laverne Cox Presents: The T Word, hopes to not only educate viewers on issues that affect trans people’s lives, but also show trans and gender non-conforming youth that it’s okay to be whoever they are. The subjects of the documentary include three trans men (named Ari, Kye and Shane) and three trans women (named Avery, Daniella and L’lerrét) in their early twenties, as well as a twelve-year-old trans girl named Zoey. 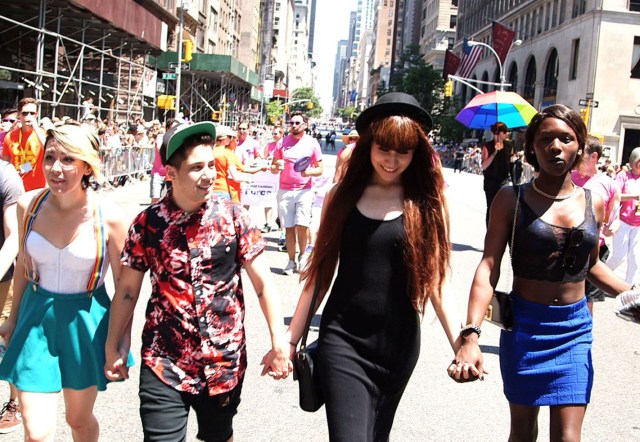 This documentary discusses everything from dealing with unsupportive family, trying to find love, facing anti-trans violence and bullying and even disclosing your trans status to others. For all people, both trans and cis, this documentary is an extremely important television event. If you don’t have MTV or Logo, I’d suggest finding a friend who does.

One of the highlights of the documentary is all the time they spend focusing on then twelve-year-old Zoey. Despite being bullied by both her classmates and even by school administrators when she came out, she doesn’t let that bring her down and has an incredibly positive outlook on life. Cox told me that it’s these kinds of attitudes that are going to allow the young trans people of America to bring about change.

I think young people tend to be more optimistic and politically active… There’s this hope that every single young person who participated in this special has that they believe they can change the world around them. When I think about that I get really emotional, I really do believe that every young person involved in this project believes they can change the world around them. I think that it is incumbent upon all of us to not disappoint them, to not allow the world around them to stay the same, where we are treating each other in ways that are reprehensible, that we continue to have systems in place that disadvantage certain people. When there are young people who have this sense of hope, who put themselves on on the line in a really intense way by going on national TV. We should live up to the hopes that they have and try to make this world better for them. 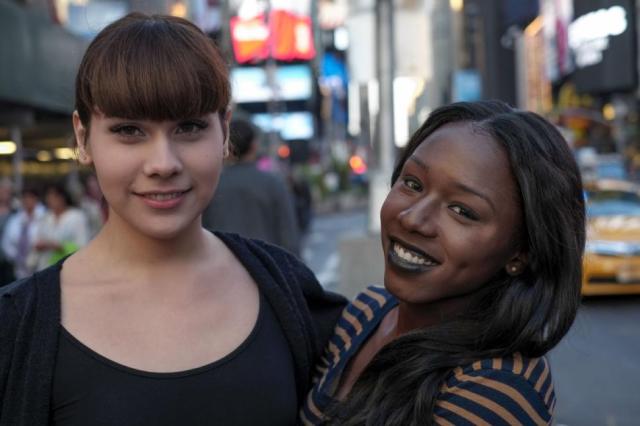 Another unforgettable, but much more sombre moment is when Cox talks to Daniella, a 20-year-old woman from the Bronx about her experiences with transmisogynistic violence. Watching her tell her story of being attacked and sexually assaulted on the street is both heartbreaking and eye-opening. But the documentary doesn’t stop there, Cox, along with Daniella and Avery also go to the spot where Islan Nettles was murdered and discuss the fact that there is still no justice for her over a year later. With the news that at least 3 trans women of color have been murdered in the first half of this month alone, these scenes become even more powerful.  L’lerrét Ailith, a trans woman featured in the documentary who is working to decriminalize the lives of trans youth of color in New Orleans, said that she hopes this documentary will be jumping off point for discussions about how to reduce anti-trans violence

This documentary is important because it will help inspire more dialogue on these issues and increase visibility of trans* persons living in their truths in a world that seeks to invalidate and marginalize them. People who watch this can use this opportunity as a starting point to sparking up discussion on systematic oppression. They can use this as a sort of guideline to help them become better allies and to speak up for us in places we can’t speak up for ourselves.

It’s really amazing that we’re getting a televised documentary like this about trans people and produced and hosted by a trans woman of color and featuring several more when just a couple years ago pretty much the only times trans people were on TV were in sensationalized or mocking roles. While things are getting better on TV alternatives like Netflix and Amazon Prime, regular TV still lags behind. Laverne Cox Presents: The T Word is changing all of that. This time, trans people get to tell their own stories, get to talk about their lives in their own words and on their own terms. And Cox hopes that that will encourage viewers who aren’t trans to view trans people in a new light.

I’m consistently struck that a lot of those who are in the LGBTQ movement don’t understand trans people, don’t think that trans people should be included in the overall movement and don’t value trans voices. I mean, it’s just pretty shocking. I would hope that people who aren’t trans in the LGBTQ community would just see our humanity and understand that we are who we say we are that we should be treated in ways that are consistent with that. That’s all. That young Zoey should be treated like any other 12 or 13 year-old girl and not be denied anything that other young women are receiving in terms of treatment. I mean we still live in a sexist society, we still live in a racist society, so those things need to be changed as well and need to be addressed – because people live at intersections of multiple identities. But I think that individually that they just see us as who we are and not who they want us to be. And I think that goes for LGBTQ people and non-LGBTQ people as well. That we are who we say we are and we should exist on our own terms, not terms that you want to place onto us.

Think of us all as Christmas trees – we’re all the same type of tree but we decorate ourselves differently depending on our moods and personalities. Let the tree be. Let it choose it’s own ornaments. Let is develop it’s own personality. Stop making gender such a huge deal. Gender is neither rigid nor definitive so stop trying to make the binary happen for every single being that inhabits this Earth. Allow people to truly practice free will.

For trans people who watch, Cox and the others want them to feel affirmed, like they have a future where they are free to be themselves. As L’lerrét says, there’s nothing better than being true to who you feel you are.

Living authentically is the most rewarding experience. Whether you be stealth or not, at the end of the day, live your true life how YOU want to and you will be the happiest person ever. Everyone doesn’t need to know your business but do what you want to do to make your own self happy. You are ethereal. You are enough.

You can watch the one hour documentary on Friday, October 17 at 7 pm ET/PT on Logo TV and MTV. Check out and use social media to participate in the live “Trans Forum” hosted by Cox and everyone’s favorite MTV News Anchor SuChin Pak on Logo TV and MTV.com directly following it. MTV has also set up an online hub they’re calling Look Different, where you can find resources both for trans people and potential trans allies.