Last night’s episode of my favorite currently-airing sitcom, The Mindy Project, introduced this season’s brand new lesbian character, Dr. Jean Fishman, played by Niecy Nash. You may remember Niecy Nash from Reno 911. If you don’t, you should probably cancel your plans for the day and marathon Reno 911 instead. At some point you’ll feel like you’ve had enough Reno 911 for the day, at which point Episode 305 of The Mindy Project, “The Devil Wears Land’s End,” will be up on Hulu and then you can watch it while you eat supper. There, I just planned your day for you!

The episode is traditional Mindy Project fare: Mindy’s self-absorption gets her and everybody around her into trouble, jokes are made at everybody’s expense, flexible and often progressive ideas about sexuality are expressed, those two bros work out their obvious sexual tension, etc. But this time WITH LESBIANS! 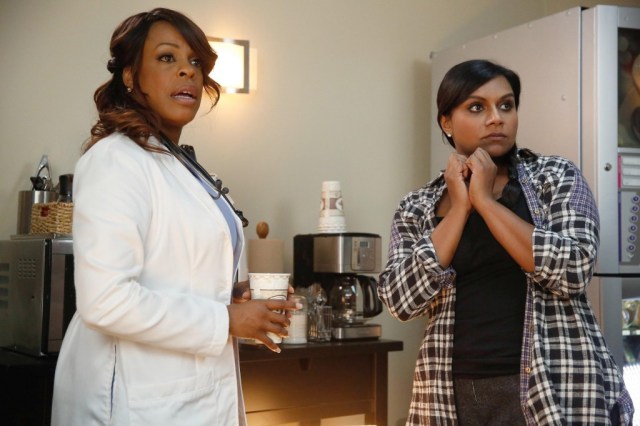 The show kicks off and Mindy quickly gets in trouble when her phone’s Iggy Azelia ringtone goes off during Dr. Jean Fishman’s big introductory speech to all the doctors who do stuff at her hospital, and thus Mindy’s practice is punished with a shitty hospital schedule. In order to transform this dismal situation into a more delightful situation, Mindy takes Jean out to do girlfriends stuff, but Jean thinks it’s girlfriends stuff.

But Mindy’s still dating Ted the Republican from Six Feet Under and it turns out that Jean also has a girlfriend and her name is Deborah (obviously) and she’s played by our patron saint Julie Goldman. Hijinks ensue! You’ll have to see for yourself.

Scissoring? I could take it or leave it.

Last night’s story contained a thing I generally dislike — a lesbian kissing a straight girl who isn’t actually interested in her — but in this context, the whole situation still landed. (Plus the ep’s other storyline featured a guest appearance by Shonda Rhimes!) The lesbian storyline was granted the same level of often-disrespectful ridiculousness every story gets on the show, and GLAAD has indicated that Jean Fishman will be a recurring character. We had a black lesbian and a butch lesbian holding hands on a television show! I know Kaling has responded to fan criticism of various elements of her show in a way that many people on the internet aren’t impressed with and sometimes this episode inspired my girlfriend to make this face, but I laughed out loud more than once. Plus, a new episode of The People’s Couch starring Julie Goldman and Brandy Howard was on right afterwards, so if I’d had a banana peanut butter milkshake then it would’ve been a perfect 1.5 hours on the couch!