Over the next few weeks, people will vote in the 2014 midterm elections across the United States, deciding on a series of ballot measures and hopefully electing new people to Congress who don’t suck. That doesn’t mean we’re not already talking about the upcoming 2016 presidential elections, though, because everyone at CNN’s gotta eat. And although the nation’s highest offices have been sought by many badass women, we have yet to be listed as President or Vice President slot in anyone’s history textbook. It’s enough to make me wish we could go back in time and vote for, well, these chicks. 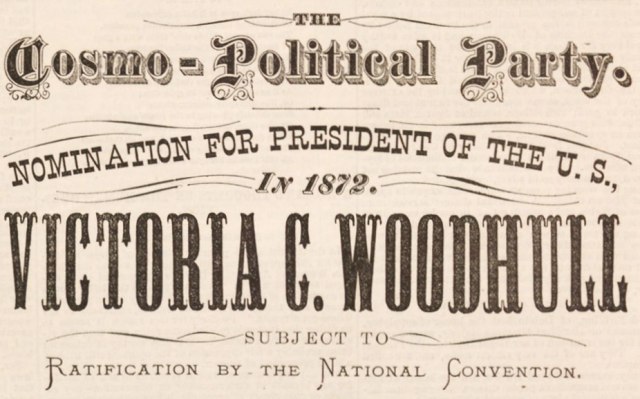 “It makes no difference who or what you are, old or young, black or white, pagan, Jew, or Christian, I want to love you all and be loved by you all, and I mean to have your love.” (via)

Victoria Woodhull declared her intent to run for President in1871, before women were even legally allowed to vote. In 1872, she was nominated by the Equal Rights Party, with famed abolitionist Frederick Douglass as her elected running mate. Woodhull was a longtime advocate of free love, which was controversial times a million in her time, and was arrested on obscenity charges days before the election that year for publishing an account of a Reverend’s sexual affair for public consumption. Disrupted but not deterred, she ran again in 1884 and clinched a nod from the National Woman Suffragists’ Nominating Convention in 1892. Woodhull was a eugenicist, someone who promoted deadly racist ideology through restricting human reproduction, and that philosophy has no place in office, but many of her other contributions laid the ground for important breakthroughs later in American history. 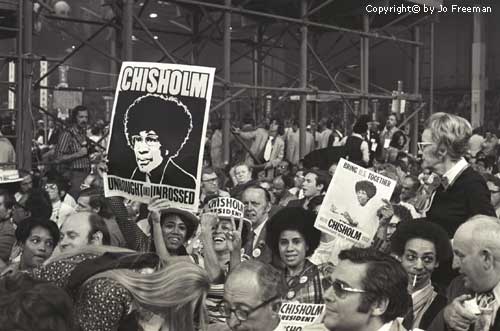 Shirley Chisholm was elected to Congress in 1968, making history then as the first-ever African-American woman to reach such an office. While serving out her seven terms, she founded the Congressional Black Caucus. None of this history-making satiated Chisholm’s fire, though, and in 1972 she became the first-ever black candidate on a major party ticket when she fought for the Democratic nomination for President. Her campaign slogan was simple: unbought and unbossed. The Chisholm Trail, as her bid was called, garnered votes in 14 states and the support of 151 delegates at the Democratic Convention, but didn’t win her a spot on the ticket that year. After the loss, she went on to co-found the National Political Congress of Black Women. 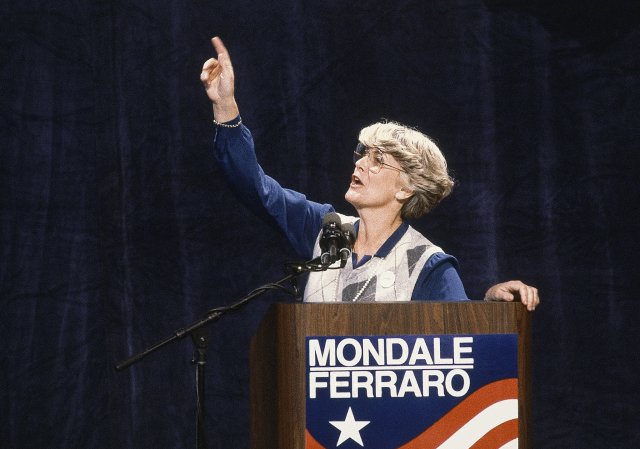 “Nobody had greater confidence in me than my mother. She always said, ‘My daughter is going to be famous.’ When Walter Mondale asked me to be his running mate, my mother was the first person I called after my husband. She was so excited. She thought that I could do anything. She was probably the only person in the country who was surprised that we didn’t win.” (via)

Geraldine Ferraro was nominated for Vice President by Democratic presidential candidate Walter Mondale in 1984 following her election to the House of Representatives in 1978. She was an outspoken feminist during her time as a Representative, which led groups like the National Organization for Women to successfully push Mondale for her selection in the 1984 election against Ronald Reagan and George H.W. Bush. Although the pair wouldn’t succeed at disrupting the reign of Reaganomics and the War on Drugs, Ferraro would go on to become an active politician, pundit, and advocate throughout the remainder of her life. 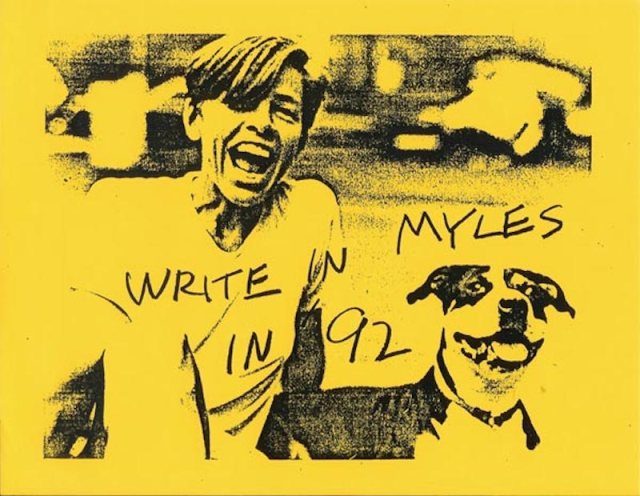 “You really have to be a native-born American citizen to do this and at least 40 years old. Once the campaign starts to heat up, out of the corner of your eye, watch and see what the other candidates are doing. As you’re walking your dog, opening your mailbox, as you’re making love, as you’re slowly waking up in the morning, think about what the other candidates are doing. Try to think of their collective statements about what’s right and what’s wrong with America as a pool. Choose your moment carefully and jump in. Jump when you know that the only thing that would make sense this year would be if you ran for President of the United States. You know, they really

can’t stop you. In except for maybe two states, Nevada being one, any citizen can be a written-in candidate. In New York, for instance, you simply need 33 of your friends to sign affidavits saying that if you won they would go to the electoral college for you. You can just call them from home, and they probably wouldn’t mind bringing the affidavits over. They can get them notarized by a travel agent. No big deal. Soon people will be wanting a platform and that hinges on what was going on at the moment you jumped in. In 1992, I was moved by the realization that the candidates were not writing their own speeches and I knew that I would want to do that. They were not saying what was on their minds and I knew I would want to do that as well. This year I would probably not say what was on my mind so you can see how from year to year a woman’s candidacy can change. It’s a flexible thing. This year I would probably stay out of America during the entire campaign period and court the votes of all the Americans who are not living there. I would try and represent their needs. Maybe they would have very few needs, their main one being to not be in America, which would be already be fulfilled. I would have an easy time representing all those absent people. Our slogan could be, ‘We are not there.'”(via)

Eileen Myles, hopefully your favorite lesbian writer and my greatest inspiration, ran as an “openly female” write-in candidate for President in 1992. Her campaign, in which she pushed for peace and inclusivity, universal healthcare, cuts in domestic spending, and abolishing the income tax, stretched across 28 states and Europe. No total count of votes she received has ever been recorded, which is a damn shame because she also promised to write all her own speeches. Contrary to the world I’ve imagined in my mind, Myles told me in our last interview that she no longer writes in her own name, but you can access her campaign archive on her website. 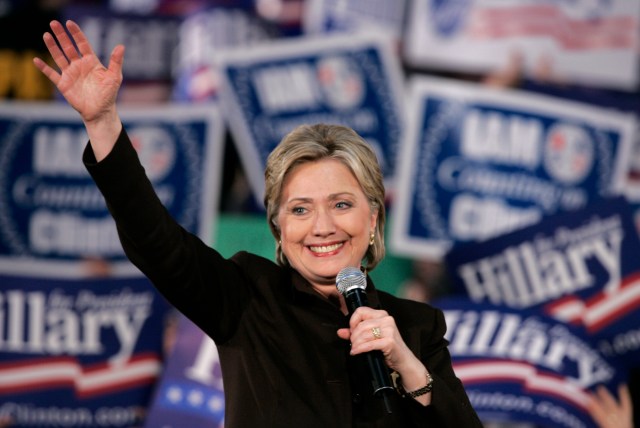 “Now, on a personal note, when I was asked what it means to be a woman running for president, I always gave the same answer, that I was proud to be running as a woman, but I was running because I thought I’d be the best president.

But I am a woman and, like millions of women, I know there are still barriers and biases out there, often unconscious, and I want to build an America that respects and embraces the potential of every last one of us.

I ran as a daughter who benefited from opportunities my mother never dreamed of. I ran as a mother who worries about my daughter’s future and a mother who wants to leave all children brighter tomorrows.

To build that future I see, we must make sure that women and men alike understand the struggles of their grandmothers and their mothers, and that women enjoy equal opportunities, equal pay, and equal respect.

I don’t need to give background information on Hillary’s run, seeing as you probably didn’t live under a rock six years ago. BUT! Just in case you did, Clinton’s historic candidacy for the presidential nomination of the Democratic party in 2007 made millions of cracks in the glass ceiling for women and politics and shattered my heart into a zillion pieces. Although her attempt for the nomination broke boundaries for women as the most successful of its kind, her campaign also reminded politicians and spectators alike that sexism is alive and well in American politics. From sexist attacks across party lines to inappropriate interview questions and a tireless stream of news cycle information about her clothing, Clinton’s campaign was marred by — and, in my opinion, destroyed by — misogyny. Although Clinton’s politics aren’t perfect, just like every other politician, but it wasn’t her politics that got her sidelined as a potential President; it was her gender.

History’s not done rewriting itself, though, and after a successful career as Secretary of State Clinton is the predicted frontrunner for 2016. In honor of the women who came before her and in honor of my own deep feelings about her brain, I say bring it on, world. This time, we just might be ready.